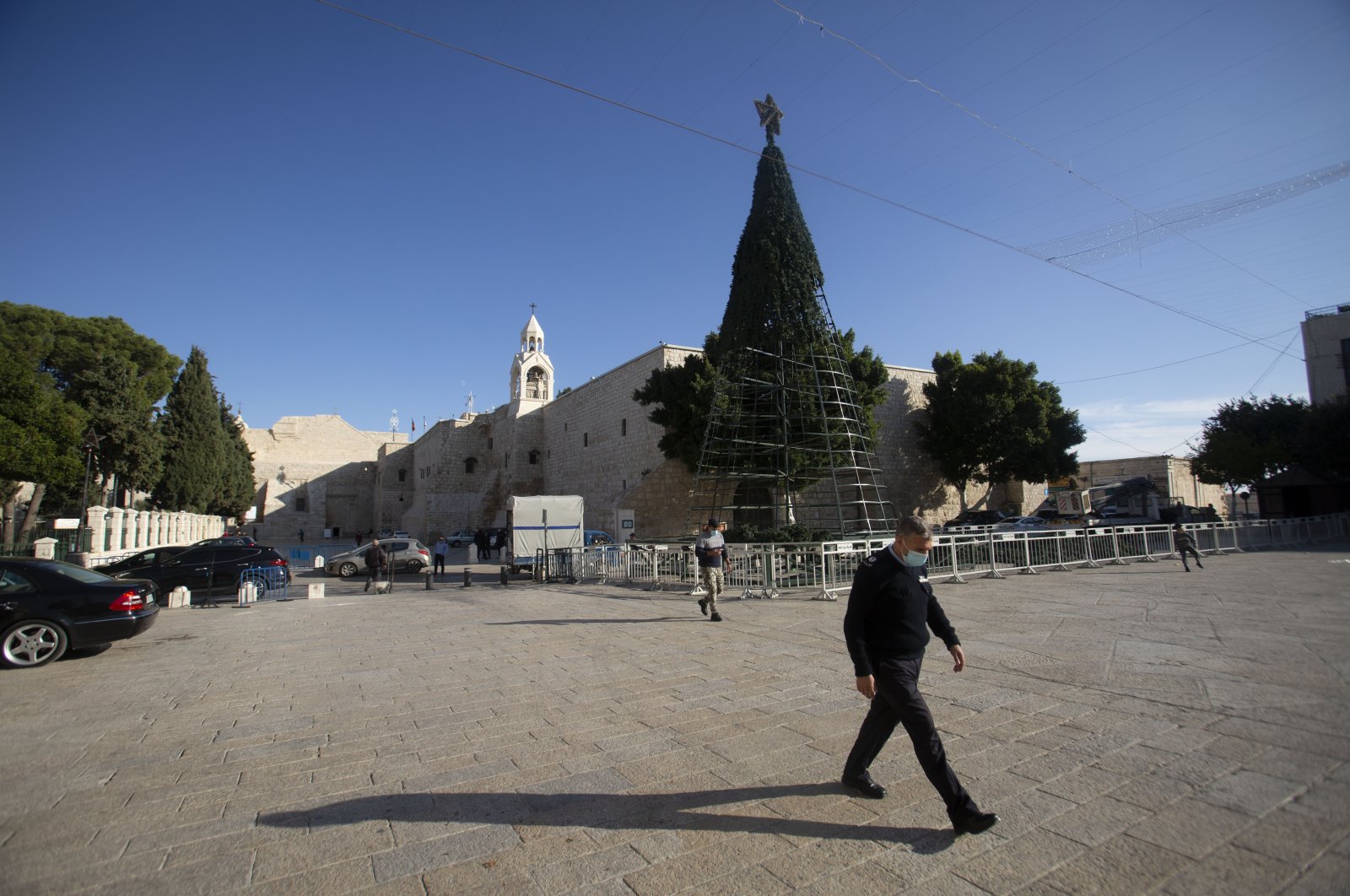 A man walks outside the Church of the Nativity, traditionally believed to be the birthplace of Jesus Christ, in the West Bank City of Bethlehem, Nov. 23, 2020. (AP Photo)
by Agencies Dec 04, 2020 11:57 am
RECOMMENDED

Jordanian Foreign Minister Ayman Safadi has held a rare meeting with his Israeli counterpart to press for the restart of stalled negotiations between Palestinians and the Jewish state.

During the meeting at the Allenby Bridge crossing, between Jordan and the Israeli-occupied West Bank, Safadi said the creation of an independent Palestinian state was key to ending the conflict with Israel.

"There is no alternative to a two-state solution" between Israel and the Palestinians, he told Israeli Foreign Minister Gabi Ashkenazi, quoted by the official Petra news agency.

"It is necessary to return to the negotiating table according to international law in order to find a real solution to achieve a just peace," Safadi said.

Thursday's meeting was a rare encounter between officials from the two countries and the first officially reported between Safadi and Ashkenazi since the latter, a former army chief of staff, become foreign minister in May.

Jordan and Israel have been bound by a peace treaty since 1994, but relations between the two neighbors are often tense.

Safadi said resuming talks between Israel and the Palestinians was timely, "particularly in light of the PA's decision to resume security cooperation with Israel."

Last month the Palestinians announced they were restoring coordination with Israel that they had stopped in May over to Israeli plans to annex parts of the West Bank. Israel put on hold its annexation plans, in return for an agreement to normalize ties with the United Arab Emirates (UAE) announced in August.

Abbas held talks in Jordan last week with King of Jordan Abdullah II ahead of visits to Egypt, where he met separately with President Abdel-Fattah el-Sissi and Arab League chief Ahmed Aboul Gheit, according to Agence France-Press (AFP).

During the tour, the Arab leaders he spoke to called for stepped-up international efforts for a solution to the Palestinian-Israeli conflict based on a two-state solution.

Talks between Israel and the Palestinians have been frozen since 2014, and a U.S. peace plan announced in January has been welcomed by Israel but rejected outright by the Palestinians as biased. The plan was among moves pushed by the Trump administration – including recognition of Jerusalem as Israel's "undivided capital" – that has angered Palestinians.

The Palestinians, who want to set up an independent state with East Jerusalem as its capital, broke ties with the Trump administration, and are now hoping to improve relations with Biden's incoming administration.