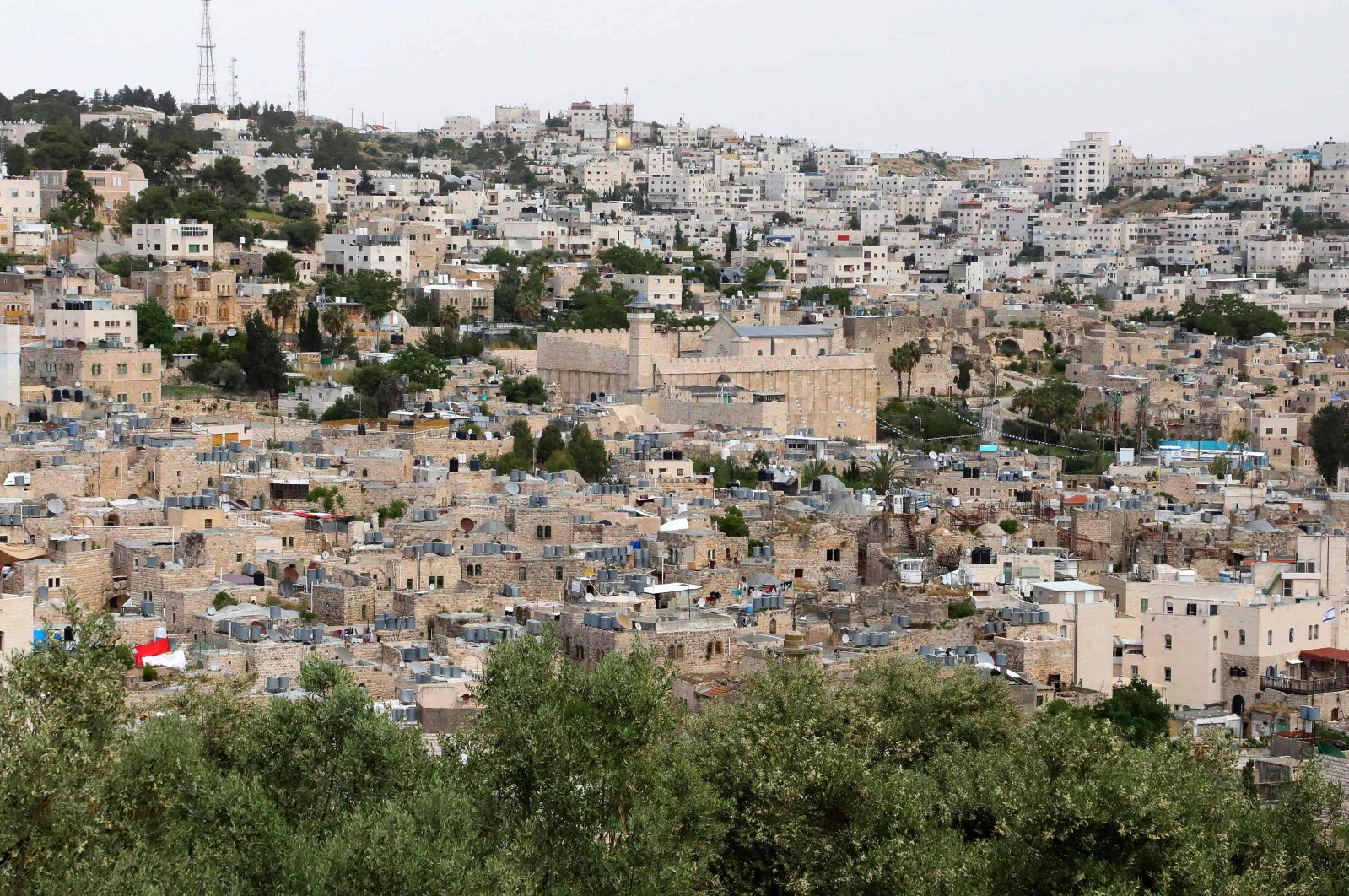 A general view of the Old City of Hebron with the Ibrahimi mosque, or the Tomb of the Patriarchs, closed down during the coronavirus pandemic crisis, occupied West Bank, on May 15, 2020. (AFP Photo)
by Compiled from Wire Services
May 15, 2020 4:20 pm

Jordan's king warned Israel of a "massive conflict” if it proceeds with plans to annex large parts of the occupied West Bank, as European Union foreign ministers met Friday to discuss what action the bloc might take in response to such a move.

Israel has vowed to annex Jewish settlements and the Jordan Valley, which could spell the end of the long-stalled peace process by making it virtually impossible to establish a viable Palestinian state. Prime Minister Benjamin Netanyahu has moved a step closer by reaching an agreement to form a government after more than a year of political deadlock.

President Donald Trump's Middle East plan, which overwhelmingly favors Israel and was rejected by the Palestinians, gave a green light to annexation, but most of the rest of the international community is strongly opposed.

"Leaders who advocate a one-state solution do not understand what that would mean,” Jordan's King Abdullah II said in an interview with the German magazine Der Spiegel published Friday.

"What would happen if the Palestinian National Authority collapsed? There would be more chaos and extremism in the region. If Israel really annexed the West Bank in July, it would lead to a massive conflict with the Hashemite Kingdom of Jordan,” he said.

Jordan is a close Western ally and one of only two Arab states to have signed a peace treaty with Israel. Abdullah declined to say whether annexation would threaten that agreement.

"I don’t want to make threats and create an atmosphere of loggerheads, but we are considering all options. We agree with many countries in Europe and the international community that the law of strength should not apply in the Middle East."

EU foreign ministers had planned to welcome the formation of a new Israeli government and offer the bloc's cooperation, but Netanyahu and his rival-turned-partner, Benny Gantz, have postponed the swearing-in of their controversial new Cabinet as the Israeli leader tries to quell infighting within his Likud party.

The ceremony, originally scheduled for Thursday, is now planned for Sunday to give Netanyahu more time to hand out coveted Cabinet appointments to members of his party.

Their coalition agreement allows him to present an annexation proposal as soon as July 1, and the EU ministers are struggling to thrash out a common position should the move go ahead.

The 27-nation bloc has routinely condemned Israeli settlement expansion and warned against annexation, but member countries appear too divided to take any major action, such as imposing sanctions. They are also limited to holding informal talks via videoconference because of the coronavirus pandemic.

"This is a very divisive issue inside the council” of ministers, EU foreign policy chief Josep Borrell said Monday.

Borrell said the talks are nevertheless important for setting out the positions of the 27 countries on "the respect of international law and how can we judge this announced annexation in order to clarify the position of the European Union.”

In February, he affirmed the bloc’s commitment to a two-state solution in the Middle East based on the 1967 lines, with the possibility of mutually agreed land-swaps. Israel seized east Jerusalem, the West Bank and the Gaza Strip in the 1967 war. The Palestinians want all three to form their future state.

The EU has already rejected U.S. President Donald Trump’s Mideast plan, which would allow Israel to annex about one-third of the West Bank, leaving the Palestinians with heavily conditioned statehood in scattered territorial enclaves surrounded by Israel.

Jordan has been lobbying the EU to take "practical steps” to make sure annexation doesn’t happen.

In a statement, Jordan's Foreign Minister Ayman al-Safadi "stressed the need for the international community and the European Union in particular to take practical steps that reflect the rejection of any Israeli decision to annex.”

Israel captured the West Bank, east Jerusalem and the Gaza Strip in the 1967 Mideast war. The Palestinians seek these territories as part of a future independent state. In the decades since, Israel has built settlements in the West Bank and east Jerusalem that now house nearly 700,000 Israelis. Most of the international community considers these settlements a violation of international law and obstacles to peace.