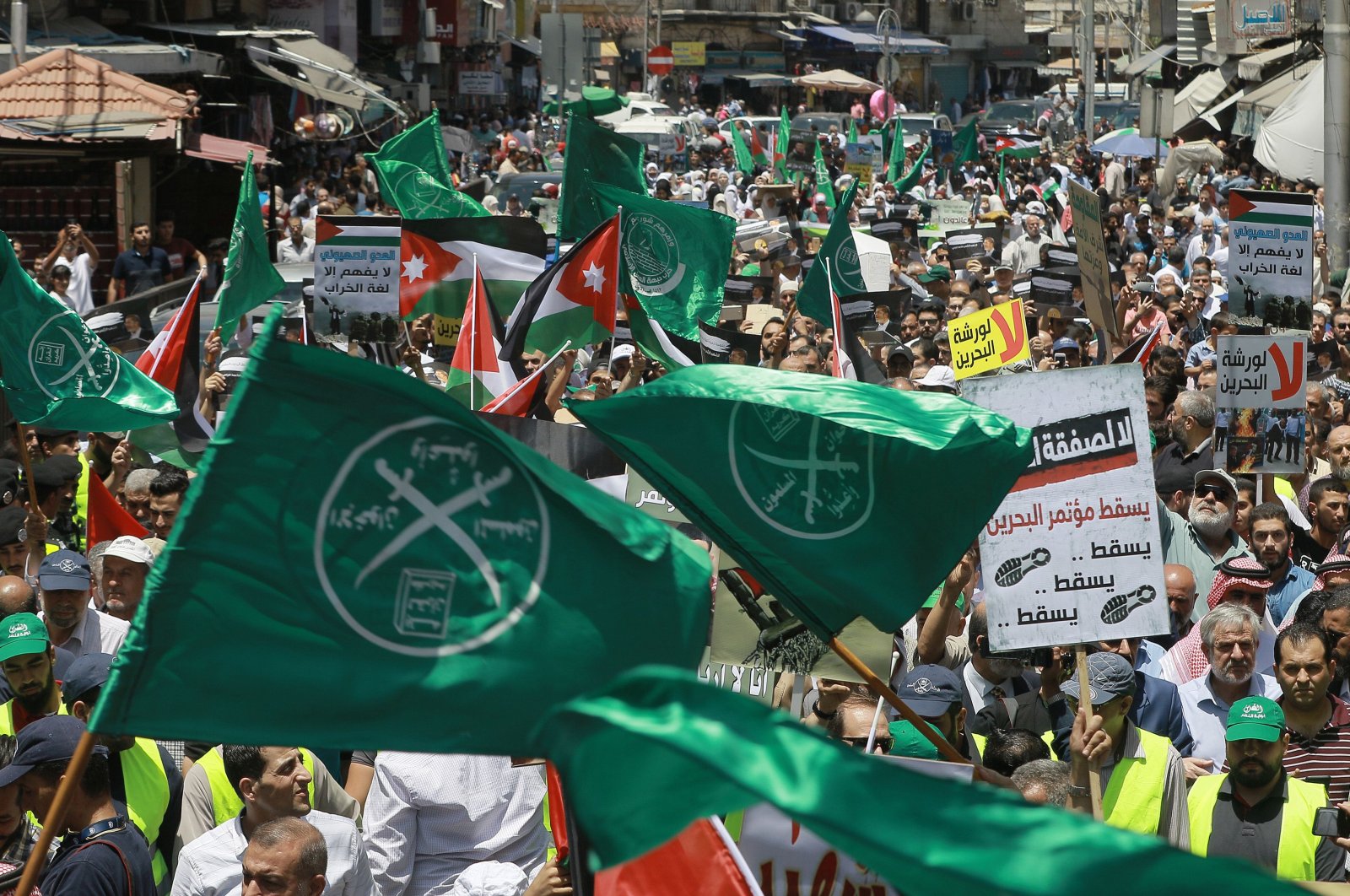 Jordanian flags, as well as flags of the Muslim Brotherhood and other political parties, are waved with other protest signs denouncing the U.S.-led Middle East economic conference in Bahrain, June 21, 2019. (AFP Photo)
by French Press Agency - AFP Jul 16, 2020 12:50 pm
RECOMMENDED

Jordan's top court has dissolved the country's branch of the Muslim Brotherhood, an official said Thursday, citing the group's failure to "rectify its legal status."

"The Court of Cassation yesterday (Wednesday) issued a final verdict ruling that the Muslim Brotherhood group is dissolved and has lost its legal status, for failing to rectify its legal status under Jordanian law," the official said, requesting anonymity.

Jordan's move came in the wake of crackdowns on the group by Saudi Arabia and the United Arab Emirates (UAE). The Muslim Brotherhood, founded in Egypt in 1928, is a pan-Islamic movement with both charitable and political arms. Since its foundation, the Brotherhood has survived repeated crackdowns at home and has a network of groups across the Middle East. It has faced years of pressure, especially in the wake of the 2011 Arab Spring uprisings, and has been outlawed in Egypt and banned in several other countries.

Amman had tolerated the group's political arm for decades, but since 2014, authorities have considered it illegal, arguing its license was not renewed under a 2014 law on political parties.

It continued to operate, but its relations with the Jordanian state deteriorated further from 2015 when the government authorized an offshoot group, the Muslim Brotherhood Association.

In April 2016, security services closed the Brotherhood's Amman headquarters and several regional offices, transferring their ownership to the splinter group in a step the movement denounced as political.

The original Brotherhood took the case to court in a bid to retrieve the properties, but the court in its verdict Wednesday ordered it dissolved.

The Brotherhood argues that it had already obtained licenses to operate under previous laws in the 1940s and 1950s.

"The Muslim Brotherhood ... is a model of moderation and an important element in strengthening national unity, so dissolving it is not in the national interest," Mansur told Agence France-Presse (AFP).

The Jordanian breakaway group aimed to sever ties with the Brotherhood in Egypt, where hundreds of supporters have been killed and thousands detained since the army ousted the country's first democratically elected president, Mohammad Morsi, in 2013.