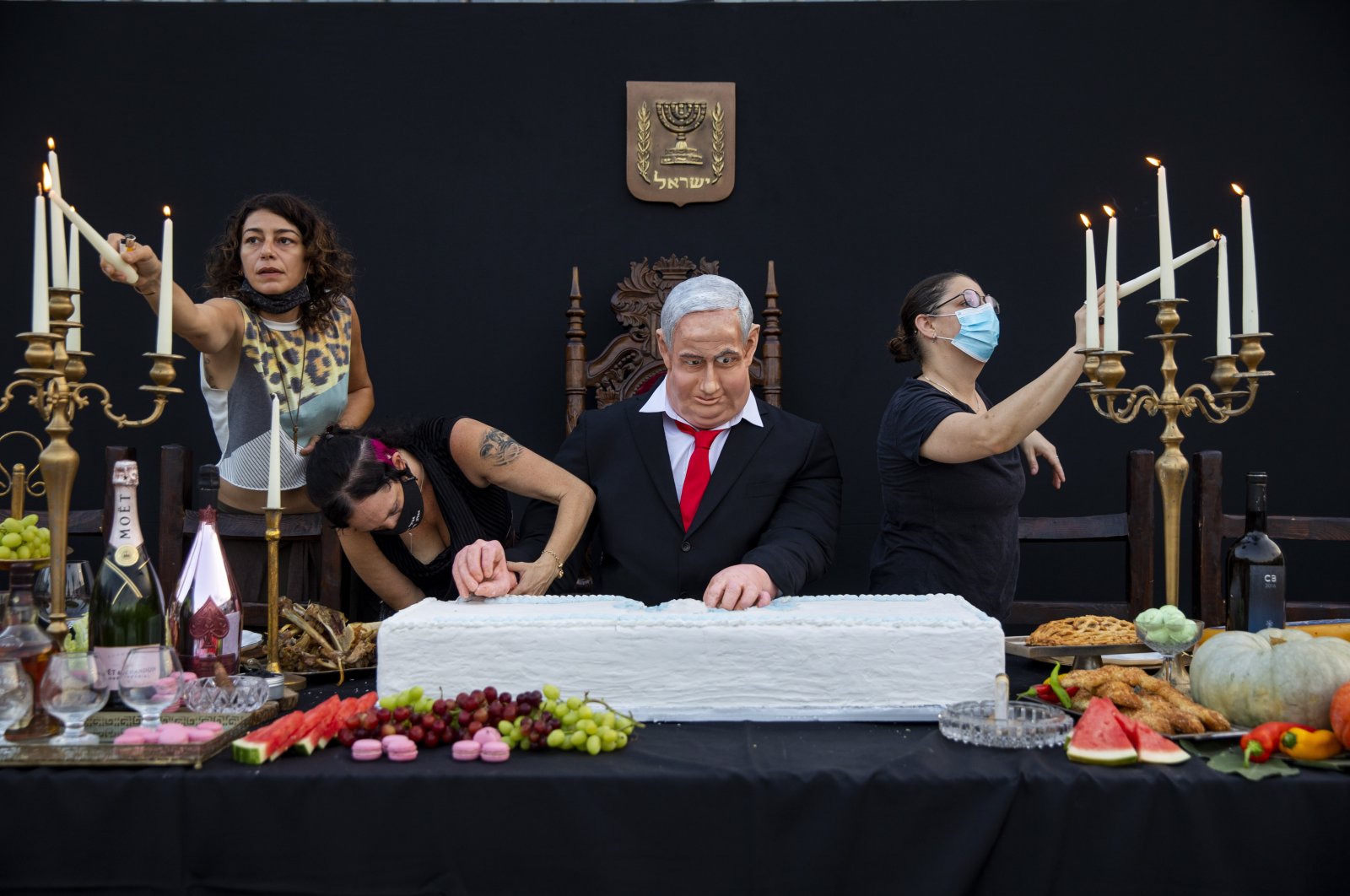 Residents of the city of Tel Aviv woke up Wednesday to a jarring site – a pop-up exhibit depicting a life-size statue of Israeli Prime Minister Benjamin Netanyahu enjoying a lavish meal by himself at a sprawling table in a mock re-enactment of the Last Supper.

The installation, displayed in Tel Aviv’s central Rabin Square, is the latest twist in a summer of demonstrations against Netanyahu. In recent weeks, thousands of people have taken to the streets, calling on Netanyahu to resign, angry over what they say is his bungled response to an economic crisis caused by the coronavirus and depicting him as a hedonist out of touch with common people.

Many critics accuse him of trampling over Israel’s democratic traditions as he clings to power while on trial for corruption charges and pushes for emergency powers under the guise of battling the coronavirus crisis.

In an interview earlier this week from his studio outside Tel Aviv, artist Itay Zalait said the installation, made of polymer materials and painted in lively colors, is meant to symbolize the “last supper of the Israeli democracy.”

The 10-meter (11-yard) long table is filled with platters of juicy fruit, wads of cash, empty bottles of liquor and a cigar – a jab at the expensive gifts Netanyahu is accused of improperly accepting from wealthy associates. Netanyahu, appearing pudgy and disheveled in a dark suit and red tie, is seen digging into a large cake – alone amid 12 empty chairs.

“You have the prime minister of Israel sitting in the center of the table and grabbing and sucking all this rich food to himself. Now he’s practically finished this meal and he’s now at the stage of the dessert, which is referring to the last minutes of time we can do something to save Israeli democracy,” Zalait said.

Zalait said he found the imagery particularly poignant at a time when unemployment has skyrocketed and tens of thousands of families are struggling because of the coronavirus restrictions that have battered Israel’s economy.

It’s not the first time Zalait has taken to life-size art to express his opinion. Two years ago, he erected a statue of Israel’s then-culture minister, Miri Regev, wearing a long white dress and staring into a full-length mirror. The depiction was meant to protest Regev’s calls for legislation requiring artists to show “loyalty” to the state.

Before that, he built a golden statue of Netanyahu to mock what he said was the idolatry of many Israelis toward the longtime leader.