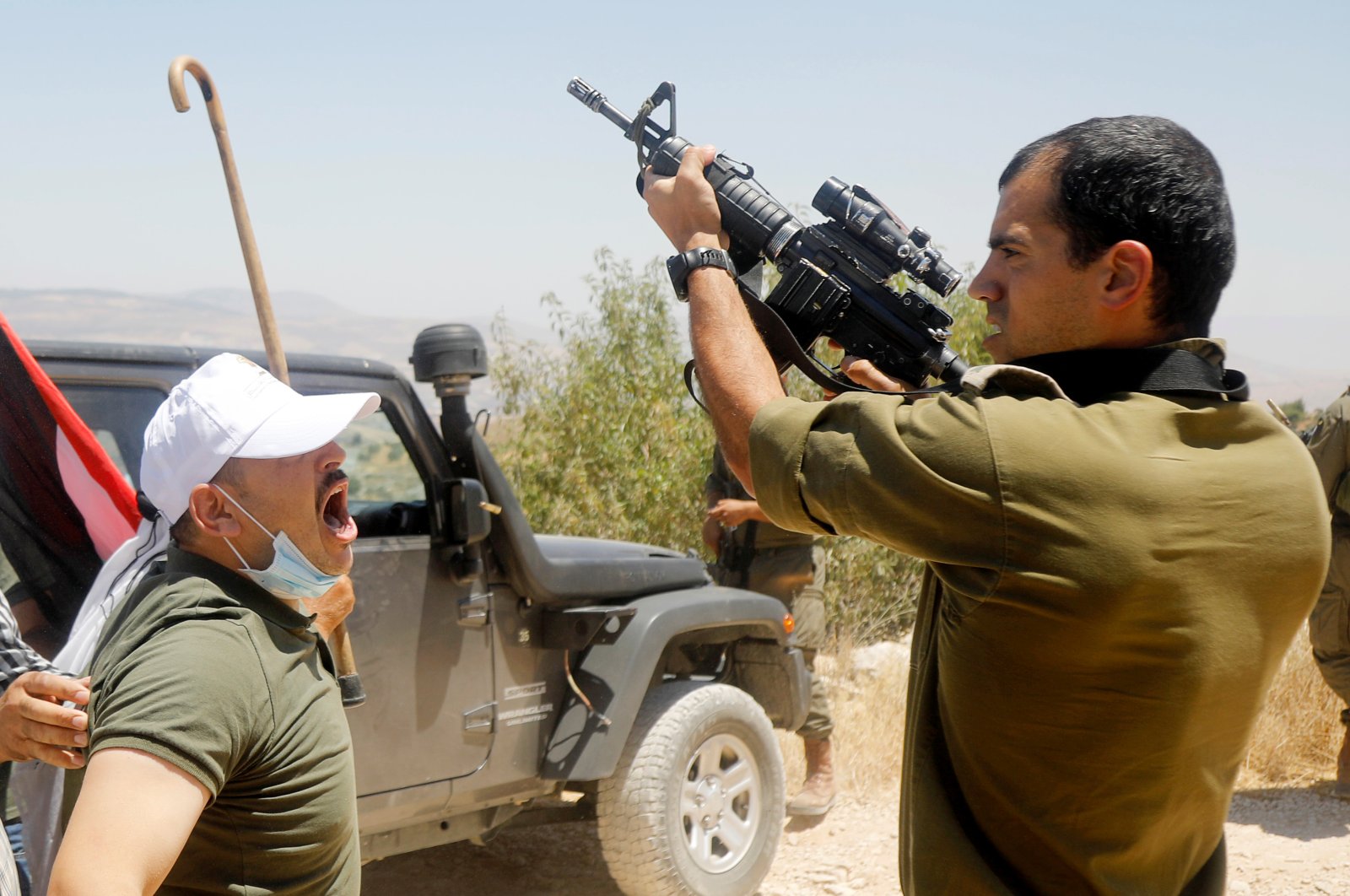 A Palestinian demonstrator reacts as an Israeli soldier fires a weapon during a protest against Israel's plan to annex parts of the occupied West Bank, Asira ash-Shamaliya near Nablus July 3, 2020. (Reuters Photo)
by Anadolu Agency Jul 03, 2020 10:10 pm
RECOMMENDED

Political, social and cultural figures from across Latin America and the Caribbean have called for sanctions against Israel as a response to the country's plans to annex 30% of the West Bank territory as of July.

Former Latin American presidents Lula da Silva and Dilma Rousseff from Brazil, Evo Morales from Bolivia, Ernesto Samper from Colombia, Rafael Correa from Ecuador, Jose Mujica from Uruguay and Fernando Lugo from Paraguay are among the prominent political figures who consider Israel's plans to be a violation of fundamental principles of international law and destroy any hope of a conflict-ending deal.

"This relentless process of de facto annexation, allowed and supported by the U.S. and Western allies, has eroded any possibility of a just and lasting peace based on international law and United Nations resolutions on Palestine," says the statement signed also by Brazilians singers Chico Buarque and Caetano Veloso.

Israeli Prime Minister Benjamin Netanyahu's promise to annex 30% of the West Bank including the Jordan Valley and the existing Jewish settlements starting July 1st, won the support of the U.S. President Donald Trump administration despite a fierce backlash from the international community.

Expansion plans have not begun, but so far more than 320 leaders from countries in Asia, Africa and Latin America have joined as signatories of the statement that is part of a South African initiative to unify support for the Palestinian civil society calling for sanctions against Israel.

The voices of protest coming from all parts of the world raise questions about whether Netanyahu will follow through on his annexation promise.

"Annexation is illegal. Period," Bachelet said in a statement.

"Any annexation. Whether it is 30% of the West Bank, or 5%," she said, urging Israel to "listen to its own former senior officials and generals, as well as to the multitude of voices around the world, warning it not to proceed along this dangerous path."

"The annexation of parts of the occupied West Bank would constitute a serious violation of international law, grievously harm the prospect of a two-state solution and undercut the possibilities of a renewal of negotiations," said Guterres on Twitter on June 24.

The initiative calls on the U.N. General Assembly, which is responsible for the emergence of the state of Israel in 1947, to "generate legitimate and effective sanctions" against Israel, including a military embargo and other measures to prevent de facto and de jure annexation by the West Bank to Tel Aviv.