Lebanese PM to call for early polls after deadly blast 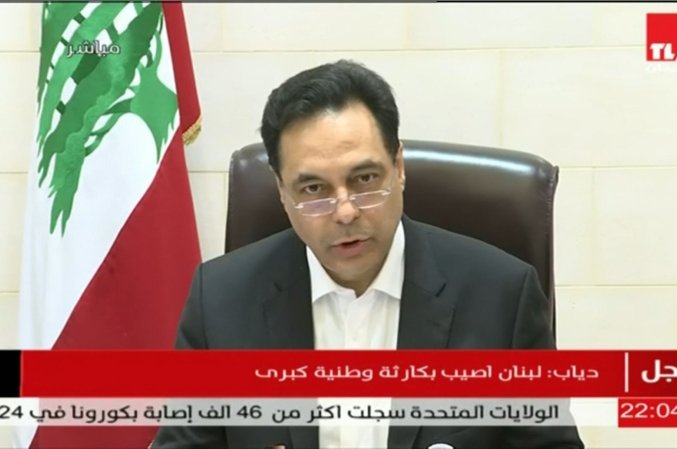 Lebanon's Prime Minister Hassan Diab on Saturday said he would propose early elections to break the impasse that is plunging the country deeper into political and economic crisis every day.

He spoke as security forces scuffled with anti-government demonstrators enraged over a deadly blast at Beirut's port on Tuesday that killed more than 150 people and wounded at least 6,000.

The explosion hit the Lebanese capital as the country was already deep in a spiraling economic crisis that has left nearly half of the population living under the poverty line, up from a third before the crisis.

"We can't exit the country's structural crisis without holding early parliamentary elections," Diab said in a televised address, echoing demands of a protest movement sparked in October that called for the removal of leaders it deemed inept and corrupt.

"On Monday, I will propose to cabinet a draft bill for early parliamentary polls," he added.

In May 2018, Lebanon held its first parliamentary polls in nine years after the deeply divided legislature repeatedly extended its own term.

But the vote failed to shake up the multi-confessional country's entrenched ruling class.

Shortly before Diab's speech, a group of demonstrators took over the foreign ministry as a new headquarters of their uprising. Some of the protesters pulled the portrait of President Michel Aoun off the wall and smashed it on the ground, an AFP correspondent said.

Diab formed his government of so-called technocrats in January to tackle the country's worst economic crisis in decades. But political leaders have been mired in deadlock despite repeated pledges of reform.

Diab on Saturday gave the country's ruling elite "two months to agree ... and clear the way for the implementation of structural reforms," threatening to step down if this deadline was not met.