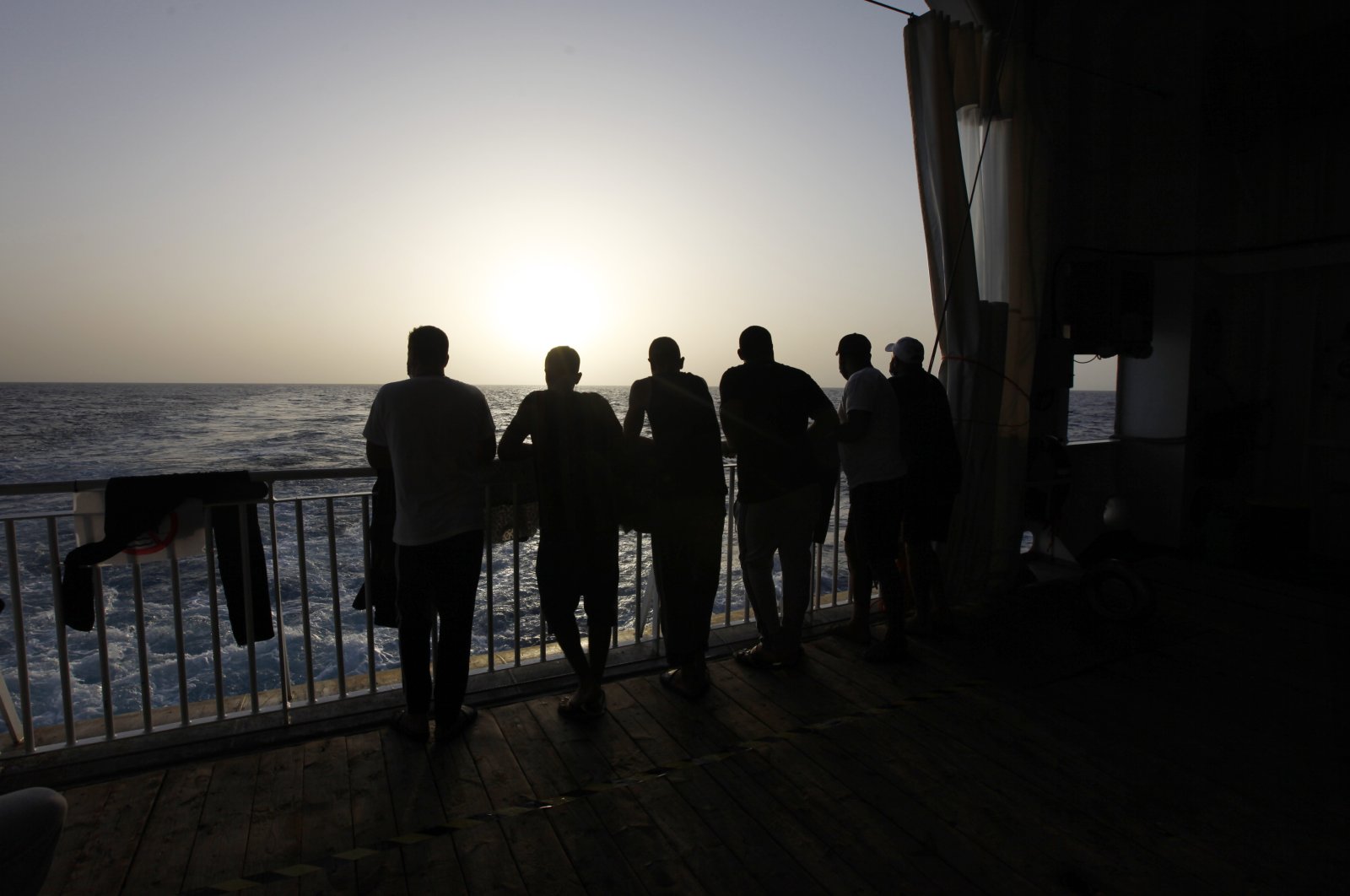 Arab migrants, including three Libyans, two Tunisians and a Moroccan, gaze at the Mediterranean Sea, on the deck of the Geo Barents, a rescue vessel operated by MSF (Doctors Without Borders) off Libya, in the Central Mediterranean route, Sept. 22, 2021. (AP Photo)
by ASSOCIATED PRESS
Oct 03, 2021 1:28 pm

Libyan authorities detained at least 4,000 migrants in the western part of the country, officials said Saturday.

The raids took place Friday in the western town of Gargaresh as part of a security campaign against illegal migration and drug trafficking. Officials said Friday that 500 illegal migrants had been detained during the campaign led by the country's Interior Ministry. On Saturday the number of arrested had reached 4,000.

Gargaresh, a known hub for migrants and refugees, is about 12 kilometers (7.5 miles) west of Tripoli, the Libyan capital. The town has seen several waves of raids on migrants over the years, but the latest one was described as the biggest.

Since the 2011 NATO-backed uprising that ousted and killed longtime dictator Moammar Gadhafi, Libya has emerged as the dominant transit point for migrants fleeing war and poverty in Africa and the Middle East, hoping for a better life in Europe

Human traffickers have benefited from the chaos in the oil-rich nation and smuggled migrants through the country’s lengthy border with six nations. They then pack desperate migrants into ill-equipped rubber boats in risky voyages through the perilous Central Mediterranean Sea route.

The detained were gathered in a facility in Tripoli called the Collection and Return Center, said police Col. Nouri al-Grettli, head of the center. He said the migrants have been distributed to detention centers in Tripoli and surrounding towns.

A government official said authorities would "deport as many as possible” of the migrants to their home countries. He said many of the detained had lived illegally in Libya for years. The official spoke on condition of anonymity because he was not authorized to brief the media.

Vincent Cochetel, the agency's special envoy for the Central Mediterranean, told The Associated Press (AP) that initial reports were that at least one person was killed and 15 injured. He said in some cases security personnel used excessive force and drove people out of their homes.

"We should not be surprised if people are scared and will try to leave by sea,” he said.

The crackdown comes amid a spike in crossings and attempted crossings of the Mediterranean Sea to Europe. Libya's coast guard has intercepted around 25,300 migrants and returned them to Libya's shores so far this year.

Hundreds of migrants were seen in images posted on social media Friday by the Interior Ministry sitting clustered together in a yard with the banner of the Collection and Return Center in the background.