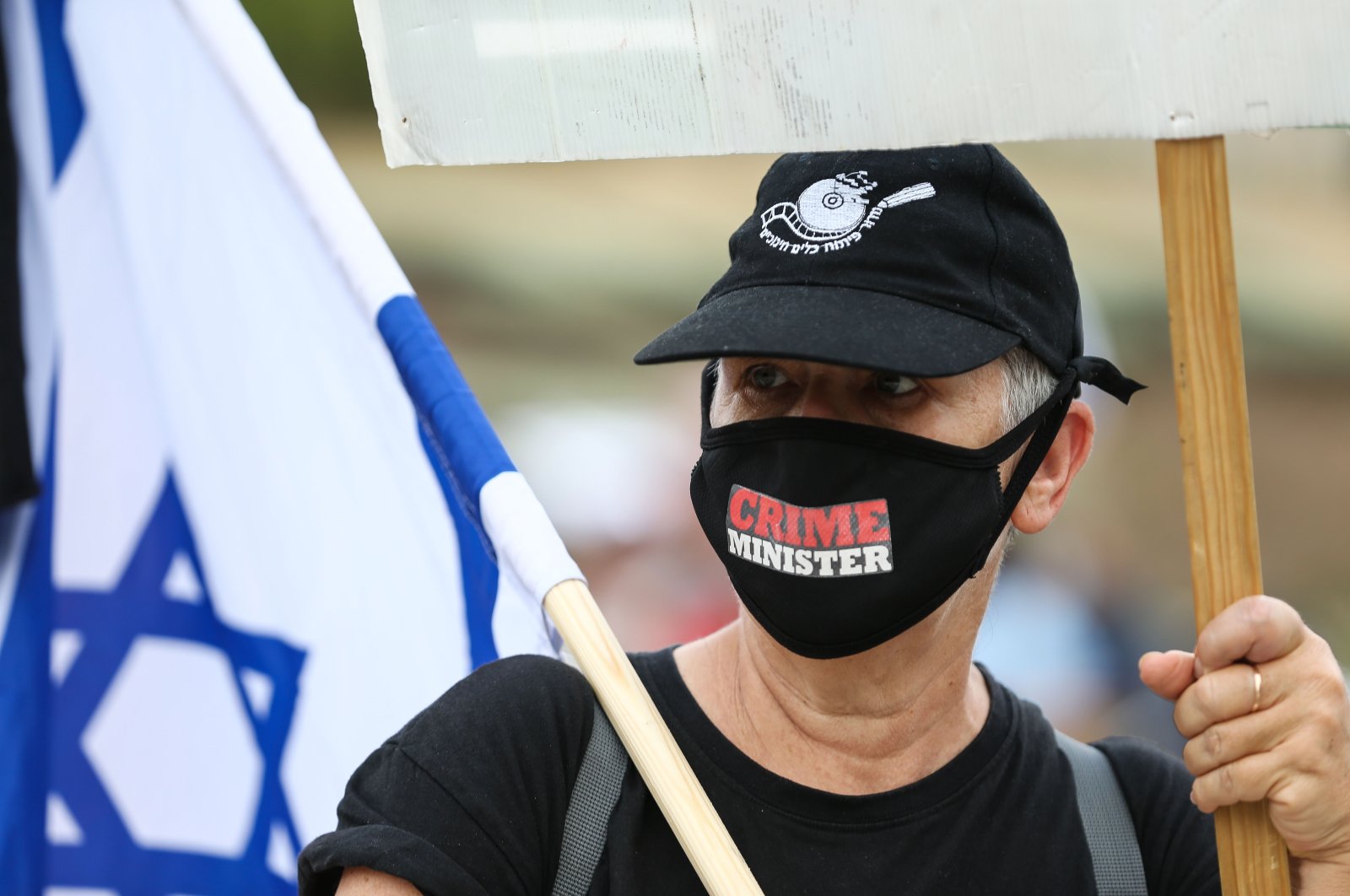 A protester in western Jeruselam is seen during a demonstration against the Netanyahu-Gantz unity government, May 14, 2020 (AA Photo)
by Agencies May 17, 2020 12:15 pm

After three deadlocked and divisive elections, a year and a half of political paralysis and another three-day delay because of political infighting in his Likud party over coveted cabinet posts, Prime Minister Benjamin Netanyahu finally swore in his new government on Sunday.

Over the weekend, both Netanyahu and his rival-turned-partner Benny Gantz announced their appointments for the new government, the 35th since Israel's creation in 1948 and also the fifth to be led by Netanyahu. It will be the most bloated in Israeli history, with an expected 36 ministers and 16 deputies.

Netanyahu and Gantz, a former military chief, announced last month they would be setting their differences aside to join forces to steer the country through the coronavirus crisis and its severe economic fallout, although they should look to spend most of their energy to likely uproar in the international scene over controversial plans to annex illegal settlements on Palestinian territory in the West Bank.

At the start of the session in the Knesset in Jerusalem, Netanyahu vowed to push on with controversial plans to annex large parts of the occupied West Bank and his incoming government.

Netanyahu’s nationalist base is eager to push for annexation before the U.S. elections in November – after which U.S. President Donald Trump could be replaced by Joe Biden, who has said he opposes unilateral annexation. The coalition agreement allows him to present a proposal as soon as July 1.

A controversial peace plan for the Israeli-Palestinian conflict from Trump, rejected by the Palestinians, gives the green light from Washington for Israel to annex Jewish settlements and other territories in the West Bank.

Netanyahu claimed in the chamber that annexation "won't distance us from peace, it will bring us closer."

“The time has come for anyone who believes in the justness of our rights in the land of Israel to join a government led by me to bring about a historic process together," he said.

His comments came two days after Palestinians marked the Nakba, meaning "catastrophe," referring to the 1948 expulsions by Zionist gangs in historical Palestine.

Such a move is seen likely to cause international uproar and inflame tensions in the West Bank, home to nearly 3 million Palestinians and some 400,000 Israelis living in settlements considered illegal under international law.

Some experts warn that Jordan may back away from its historic 1994 peace deal with Israel if the Jewish state tries to annex the strategically crucial Jordan Valley border region. Speaking to German magazine Der Spiegel days ago, Jordan's King Abdullah II said: "If Israel really annexes the West Bank in July, it would lead to a massive conflict with the Hashemite Kingdom of Jordan."

The European Union's foreign policy chief, Josep Borrell, said Friday that the bloc would use "all our diplomatic capacities" to try to dissuade Israel's incoming government from going ahead with annexations. German Foreign Minister Heiko Maas said it was clear "that annexations are not compatible with international law."

However, the new Israeli government is likely to be less hardline on pursuing annexation than Netanyahu's last coalition, with Gantz and incoming Foreign Minister Gabi Ashkenazi both known to have reservations about an international backlash. Gantz in his speech Sunday did not mention the annexation issue.

The large cabinet and additional funds for the new position of the alternate prime minister have prompted criticism as Israel seeks to address the economic fallout from COVID-19, which has infected more than 16,500 Israelis and caused more than 260 deaths. Israel's Yedioth Ahronoth newspaper described the incoming government as "the most bloated and wasteful" in the nation's history, adding that it comes as "the Israeli economy is in an unprecedented state of emergency to boot."

The controversial power-sharing deal calls for Netanyahu to serve as prime minister for the government’s first 18 months before being replaced by Gantz for the next 18 months. Their blocs will also have a similar number of ministers and virtual veto power over the other’s major decisions.

Critics have already accused the government of being out of touch by creating so many cabinet posts at a time when unemployment has soared to 25% as a result of the coronavirus pandemic. But because Netanyahu’s bloc includes several smaller parties, he still only has a limited number of cabinet ministries to hand out to the Likud rank and file, and he faced a mini-insurgency from angry senior members ahead of the planned swearing-in ceremony on Thursday. Unable to meet a deadline, Netanyahu asked for a delay to solve his internal party crisis. To mollify his backbenchers, Netanyahu presented a series of new, questionable ministries such as “community development,” “settlement affairs” and “higher education and water resources.”

Yair Lapid, the presumptive opposition leader, said the machinations have led to a loss of “trust of the Israeli public.”

The deal has already led to the dissolution of Gantz’s alliance with Lapid after he reneged on his central campaign promise not to serve under Netanyahu, who has been indicted on corruption charges and faces a criminal trial starting next week. Their much-scrutinized coalition deal could only come about after the country’s Supreme Court ruled it had no legal grounds to block it.

In his speech to parliament, Netanyahu acknowledged that compromises had to be made but that another election would have been far more devastating.

“The public wants a unity government and this is what the public is getting today,” he said. "It's time to apply the Israeli law and write another glorious chapter in the history of Zionism."

Gantz said voters had left him and Netanyahu with a choice either to end their rivalry or let the country slip into a "kind of civil war."

In the midst of the coronavirus crisis, "it is clear to everyone" that this is not the time to take shelter inside the "principles of yesterday," he said of his decision to break his vow of three elections never to serve with the indicted Netanyahu.

Gantz will start out as defense minister, with party colleague and fellow retired military chief Gabi Ashkenazi serving as foreign minister. Netanyahu’s top deputy in Likud, outgoing Foreign Minister Israel Katz, will become the finance minister. Yariv Levin, perhaps Netanyahu’s closest ally, will become the new parliament speaker. The coalition will also include a pair of ultra-Orthodox Jewish parties and some other individual defectors to add up to 73 out of parliament’s 120 members.

The main point of contention for critics has been the newly created position of “alternate prime minister,” a post that could allow Netanyahu to remain in office even after the swap and throughout his corruption trial and a potential appeals process. There are also deep suspicions about whether Netanyahu will keep his part of the bargain and ultimately cede the premiership to Gantz.

Still, the new position is supposed to enjoy all the trappings of the prime minister, including an official residence and, key for Netanyahu, an exemption from a law that requires public officials who are not prime minister to resign if charged with a crime.

Netanyahu has been indicted on charges of fraud, breach of trust and accepting bribes in a series of scandals involving allegedly trading favors with wealthy media moguls. He denies any wrongdoing and blames the charges on a media-orchestrated plot to oust him. Since his indictment last fall he has repeatedly lashed out at the country’s legal system as well, with his political allies taking special aim at the high court and accusing it of overreach and political interference. His legal woes and fitness to serve were central issues in the recent election campaigns.