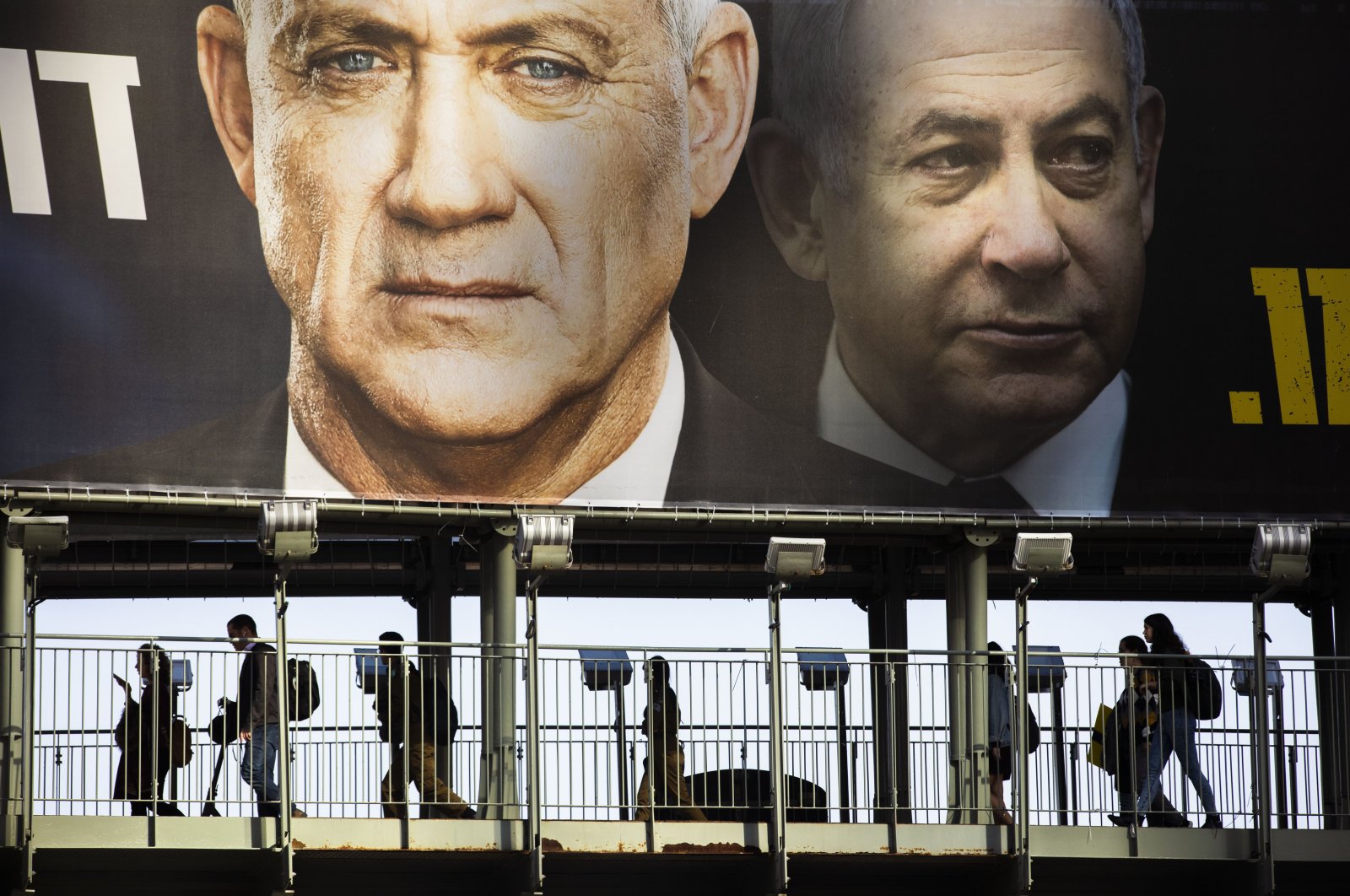 People walk on a bridge under an election campaign billboard for the Blue and White party, then an opposition party led by Benny Gantz, left, and showing Israeli Prime Minister Benjamin Netanyahu, Ramat Gan, Israel, Feb. 18, 2020. (AP Photo)
by Compiled from Wire Services
May 14, 2020 7:13 pm

The planned inauguration on Thursday of an Israeli unity government headed by Prime Minister Benjamin Netanyahu has been postponed until Sunday, in last-minute wrangling over cabinet appointments, an official statement said.

Under a coalition deal with his former election rival, centrist Benny Gantz, Netanyahu would serve as prime minister for 18 months before the former armed forces chief replaces him.

Gantz had agreed to the delay in order to give Netanyahu more time to allocate cabinet posts to Netanyahu's Likud party members, a joint statement said. Their unity government deal ends more than a year of political deadlock in which three inconclusive elections were held.

Despite the criticism, Gantz argued that teaming up with Netanyahu was the only way to avoid a fourth election.

Their blocs will have a similar number of ministers and virtual veto power over the other’s major decisions. Because Netanyahu's bloc includes several smaller parties, he only has a limited number of Cabinet ministries to hand out to the Likud rank and file.

Critics have already accused the government of being out of touch by creating so many Cabinet posts at a time when unemployment has soared to 25% as a result of the coronavirus pandemic.

Critics also object to the newly created position of "alternate prime minister.” The post that could allow Netanyahu to remain in office even after the swap and throughout his corruption trial and a potential appeals process.

The new position includes an exemption from a law that requires public officials who are not prime minister to resign if charged with a crime.

Netanyahu has been indicted with fraud, breach of trust and accepting bribes in a series of scandals involving trading favors with wealthy media moguls. He denies any wrongdoing and blames the charges on a media-orchestrated plot to oust him.

Since his indictment last fall, he has repeatedly lashed out at the country’s legal system. His legal woes and fitness to serve were central issues in the recent election campaigns.

Another hot topic will be Netanyahu's intention to introduce Israeli plans to annex parts of the West Bank as early as this summer. The coalition agreement allows him to present an annexation proposal as soon as July 1.

U.S. Secretary of State Mike Pompeo made a one-day visit on Wednesday for talks that included discussions on President Donald Trump's Mideast plan, which envisions handing 30% of the West Bank to permanent Israeli control.

In an interview published Thursday with the pro-Netanyahu daily Israel Hayom, Pompeo said the talks looked at "all the ways to move forward.”

The Palestinians claim the entire West Bank, captured by Israel in the 1967 Mideast war, as the heartland of an independent state. Annexing chunks of this territory would likely put an end to the Palestinians’ already diminishing hopes of a two-state solution and would anger the international community, which overwhelmingly supports Palestinian statehood.

Gantz says he will only support such a move with international backing.

Netanyahu's nationalist base is eager to push for annexation before the U.S. elections in November, after which Trump could be replaced by Joe Biden, who has said he opposes unilateral annexation.