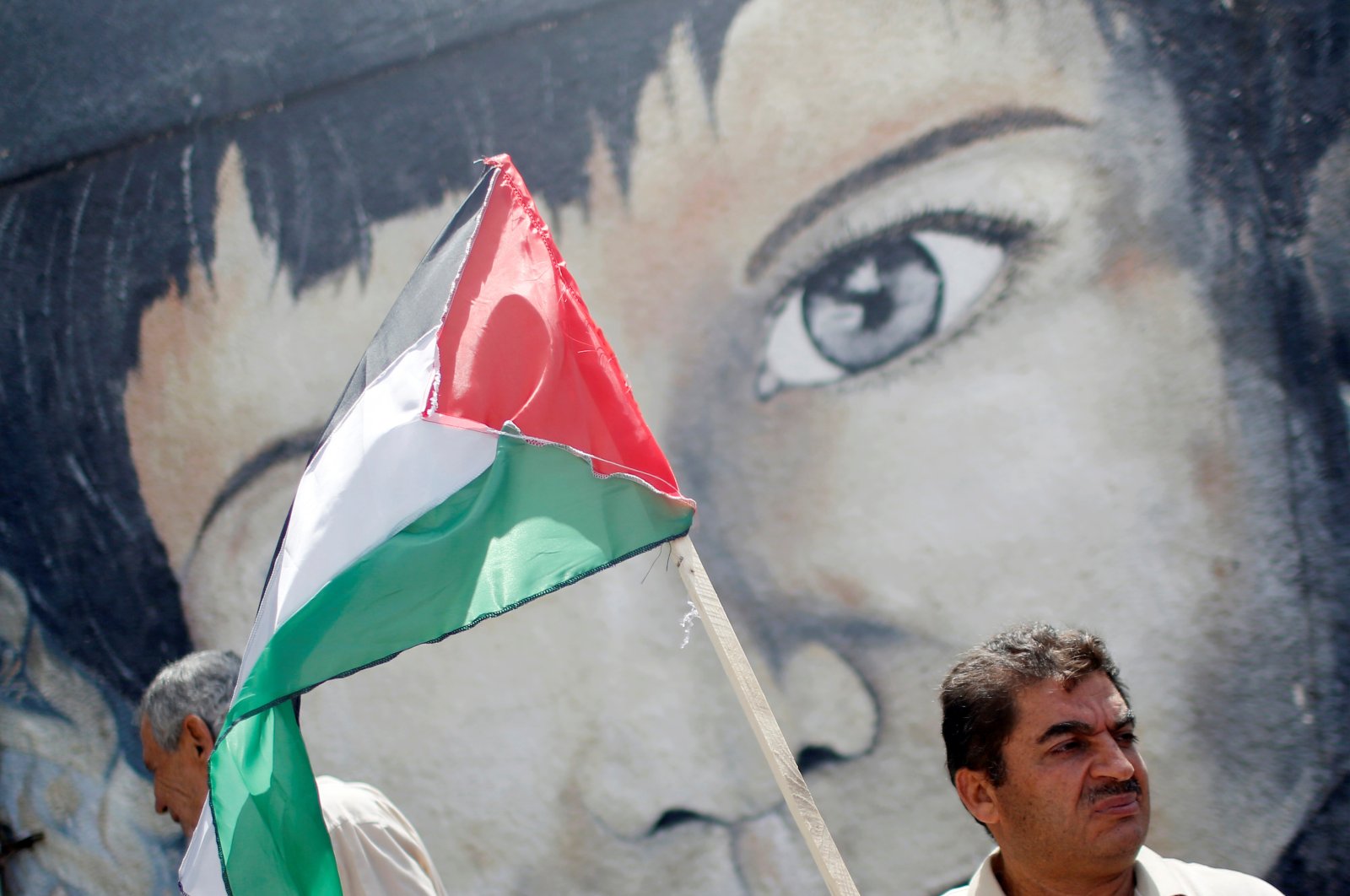 A demonstrator holding a Palestinian flag stands in front of a mural during a protest against Israel's plan to annex parts of the occupied West Bank, Gaza City, Palestine, June 22, 2020. (Reuters Photo)
by Compiled from Wire Services Jun 22, 2020 2:50 pm
RECOMMENDED

Palestinians in the Gaza Strip staged a protest on Monday to reject an Israeli plan to annex parts of the occupied West Bank. Organized by the Joint Committee for Refugees, the demonstration was held in front of the office of the United Nations Relief and Works Agency for Palestine Refugees in the Near East (UNRWA) in Gaza City, on the occasion of the World Refugee Day, which was marked on Saturday.

Speaking at the protest, Ismail Radwan, a leading member of Hamas, called on donor countries to continue their funding to UNRWA. Radwan reiterated the committee's rejection of "refugee resettlement projects and finding an alternative homeland for them." "The right of return is an individual and collective duty that cannot be abandoned," he said, demanding the implementation of U.N. Resolution 194 which stipulates that refugees must be allowed to go back to their homeland and to end the occupation. Radwan said that the committee "rejects the alleged deal of the century and any decision regarding the Israeli annexation plan." He also called the Palestinian Authority to terminate the Oslo Accords and stop security coordination with Israel, holding the latter responsible for the consequences of its annexation plan.

The West Bank, including east Jerusalem, is seen as occupied territory under international law, thus making all Jewish settlements there – as well as the planned annexation – illegal. Palestinian officials threatened to abolish bilateral agreements with Israel if it goes ahead with the annexation, which would further undermine the two-state solution.

Palestinians are worried their restricted access to the salty waters of the Dead Sea and its mineral-rich beaches could be cut further if Israel annexes land in the occupied West Bank. Israel, citing support from U.S. President Donald Trump, has announced plans to extend sovereignty over parts of the West Bank – including the Jordan Valley, which partly borders the Dead Sea. Palestinians have voiced outrage at the proposal. The Dead Sea is a popular destination where bathers float in hypersaline waters and use the nutrient-rich mud on their skin. Its shores border Israel, Jordan and the West Bank.

More than 450,000 Israelis live in settlements deemed illegal by international law in the occupied West Bank, which is home to 2.7 million Palestinians. Analysts say that Netanyahu has a narrow window of opportunity to move ahead with annexation, before the U.S. presidential elections in November that could see his close ally Trump voted out of office.