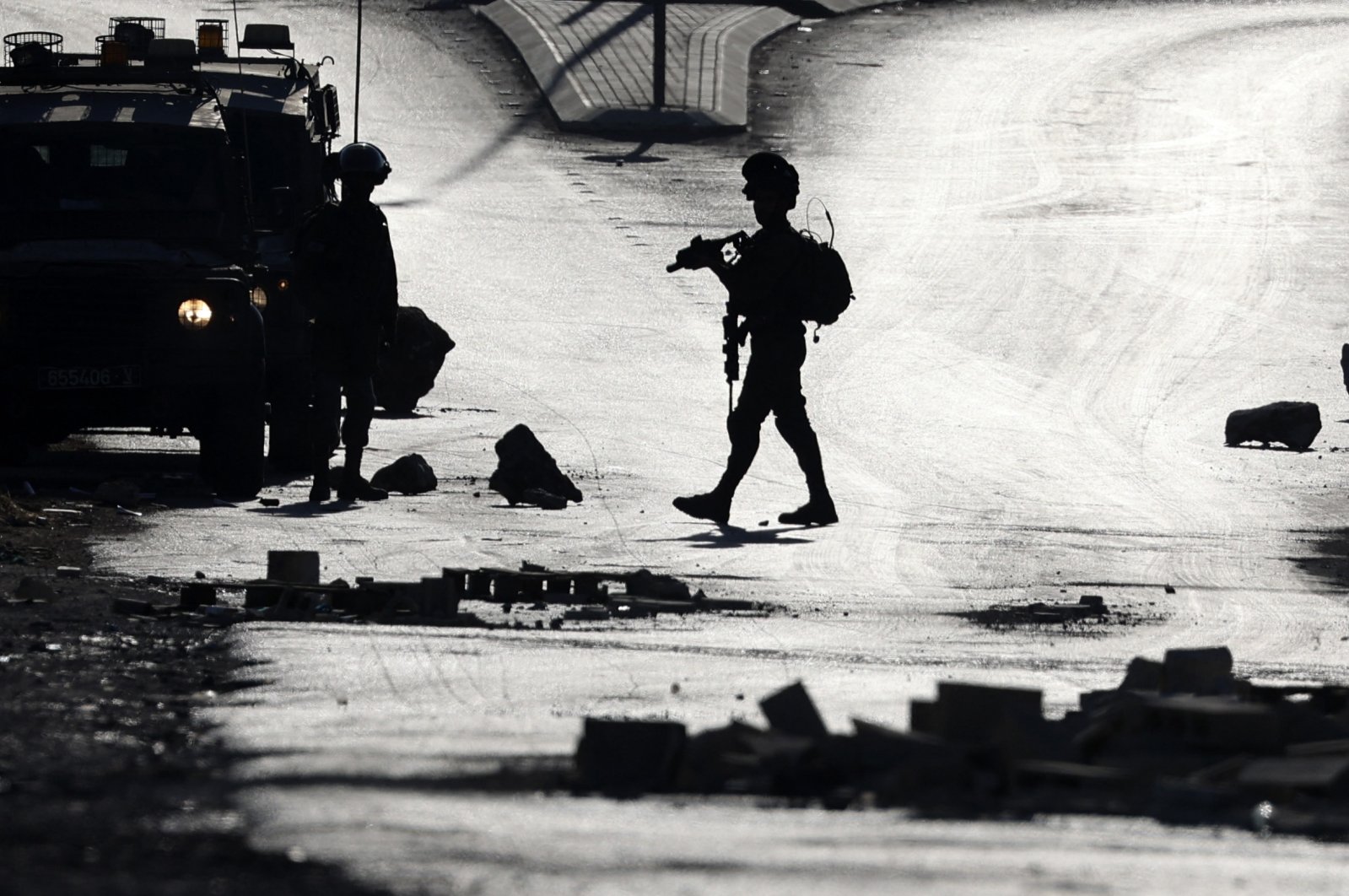 Israeli soldiers deployed to a Palestinian protest demanding that the Israeli army hands over the body of man who was shot dead by Israeli forces the previous night, in the village of Beita, in the occupied West Bank, July 28, 2021. (AFP Photo)
by Agencies Jul 29, 2021 8:43 am
RECOMMENDED

A Palestinian boy shot by Israeli forces in the occupied West Bank has died from his wounds Wednesday, the Palestinian health ministry said.

Mohamad al-Alami, 12, died in the town of Beit Omar, to the northwest of the flashpoint city of Hebron, after he was shot in the chest while traveling in a car with his father, the ministry said in a statement.

He is the second young Palestinian to die of wounds sustained by Israeli fire in days.

In a statement, the Israeli army said soldiers had seen men get out of a vehicle near a military checkpoint and begin digging in the ground.

"Troops approached the scene with caution and upon examination found two bags, one of which contained the body of a newborn infant," it added, according to remarks carried by Agence France-Presse (AFP) reported.

When a vehicle approached the same spot a little while later, the army "concluded that it was the same vehicle as before" and attempted to stop it by shouting and firing shots into the air. When the vehicle did not stop, a soldier fired at its wheels.

"We are looking into the claim that a Palestinian minor was killed as a result of the gunfire," the army said. "The incident is being reviewed by senior commanding officers. In addition, the military police has launched an investigation into the circumstances of the event."

According to Palestinian media reports, the boy was sitting in his father's car when he was fatally injured. Palestinian media reported that local residents had buried a newborn in a cemetery near Hebron. After the soldiers had dug it up, they were told by the authorities to come back and rebury the child, as Deutsche Presse-Agentur (dpa) reported.

On Saturday, a 17-year-old Palestinian died from wounds he received the day before. Mohammed Munir al-Tamimi, who suffered gunshot wounds, died in hospital, the Palestinian health ministry said, a day after violence in the Palestinian village of Beita.

Hundreds of Palestinians had gathered on Friday afternoon in Beita, a hot spot in recent months, to protest against the nearby wildcat Jewish settlement outpost of Eviatar.

The clashes pitted Palestinians against Israeli soldiers and resulted in 320 Palestinians being wounded, according to the Red Crescent.

And late Tuesday, a 41-year-old Palestinian was shot dead near Beita, the Palestinian health ministry said.

All Jewish settlements in the West Bank are regarded as illegal by most of the international community.