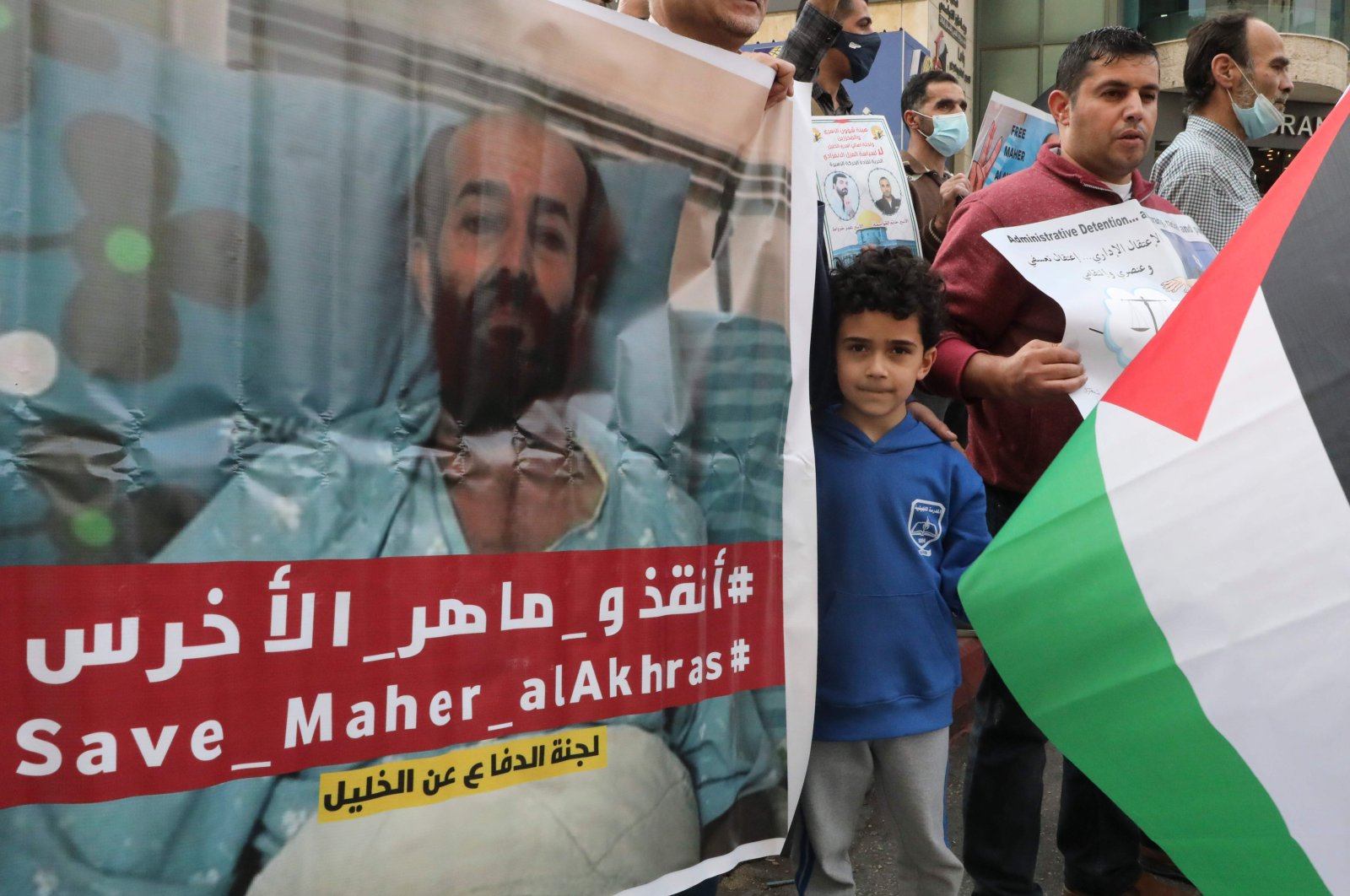 Palestinians carry placards demanding the release of administrative detainee, Maher al-Akhras, from Israeli custody during a demonstration after his health has deteriorated while on hunger strike for nearly 100 days, Hebron, Palestine, Nov. 3, 2020. (AFP Photo)
by Agencies
Nov 06, 2020 6:26 pm

Maher Al-Akhras, a Palestinian prisoner, ended his hunger strike on Friday after 103 days, claiming he had received assurances from Israeli authorities that his open-ended detention would not be extended beyond the end of November.

The Palestinian Prisoners Society confirmed his decision in an official statement saying the Israeli jail authorities will release him on Nov. 26.

Al-Akhras is close to dying and suffering severe cramps and headaches, his wife told Agence France-Presse (AFP) on Friday.

"Every day, he dies 100 times in front of my eyes and I can do nothing," Taghreed Al-Akhras said by telephone from her husband's bedside in Kaplan Hospital near Tel Aviv.

"What to do when we see those dearest to us dying in front of us?" she asked.

Qadoura Fares, the head of advocacy group Palestinian Prisoners Club, said that under the agreement, Israel will not extend the current administrative detention order for al-Akhras when it expires on Nov. 26.

Al-Akhras’ family said he will spend the next 10 days at Kaplan Hospital in central Israel, where he has been since Sept. 6, after which he would be transferred to an Arab hospital in east Jerusalem for another 10 days and then released from there.

“He has ended his strike and now he is undergoing a medical check-up to begin eating,” Al-Akhras’ wife told The Associated Press (AP) by phone.

Maher al-Akhras, 49, was arrested near the occupied West Bank city of Nablus in July and slammed with a four-month administrative detention order without any clear charges. The arrest was made based on secret evidence that was not even made available to his lawyers, a policy that Israel implements to hold Palestinians without charge.

The father of six launched his fast to protest the four-month detention order. Akhras was transferred from the prison to the hospital in early September as his health deteriorated.

Late last month, as the International Committee of the Red Cross (ICRC) warned of "potentially irreversible health consequences," he was moved back to the medical wing of nearby Ramla prison, but the Israeli supreme court ordered he be returned to Kaplan.

His lawyers appealed several times for his early release or his transfer to a Palestinian hospital. Palestinian Prime Minister Mohammad Shtayyeh had demanded his immediate release, while Israeli Arabs and Palestinians have held demonstrations in his support.

Taghreed Al-Akhras told Anadolu Agency (AA) on Friday: "Maher says that this triumph isn't for him alone. It's a triumph for all his fellows who are challenging the administrative detention by hunger strike."

"His strike let the world listen to the voice of the detainees and know about the suffering of those who are under administrative detention," she said.

Israel's administrative detention policy, inherited from the British mandate of Palestine, allows the internment of prisoners without charge for renewable periods of up to six months each time.

Israel says the procedure allows authorities to hold suspects and prevent attacks while continuing to gather evidence, but critics and rights groups say the system is abused.

Around 355 Palestinians were being held under administrative detention orders as of August, including two minors, according to Israeli human rights group B'Tselem.

Meanwhile, some 5,000 Palestinian political detainees suffer in Israeli jails, including 43 women, 180 children and 430 detainees under administrative detention. Taken away from their children, dozens of Palestinian women are suffering abuse in Israeli prisons, according to Palestinian activists.