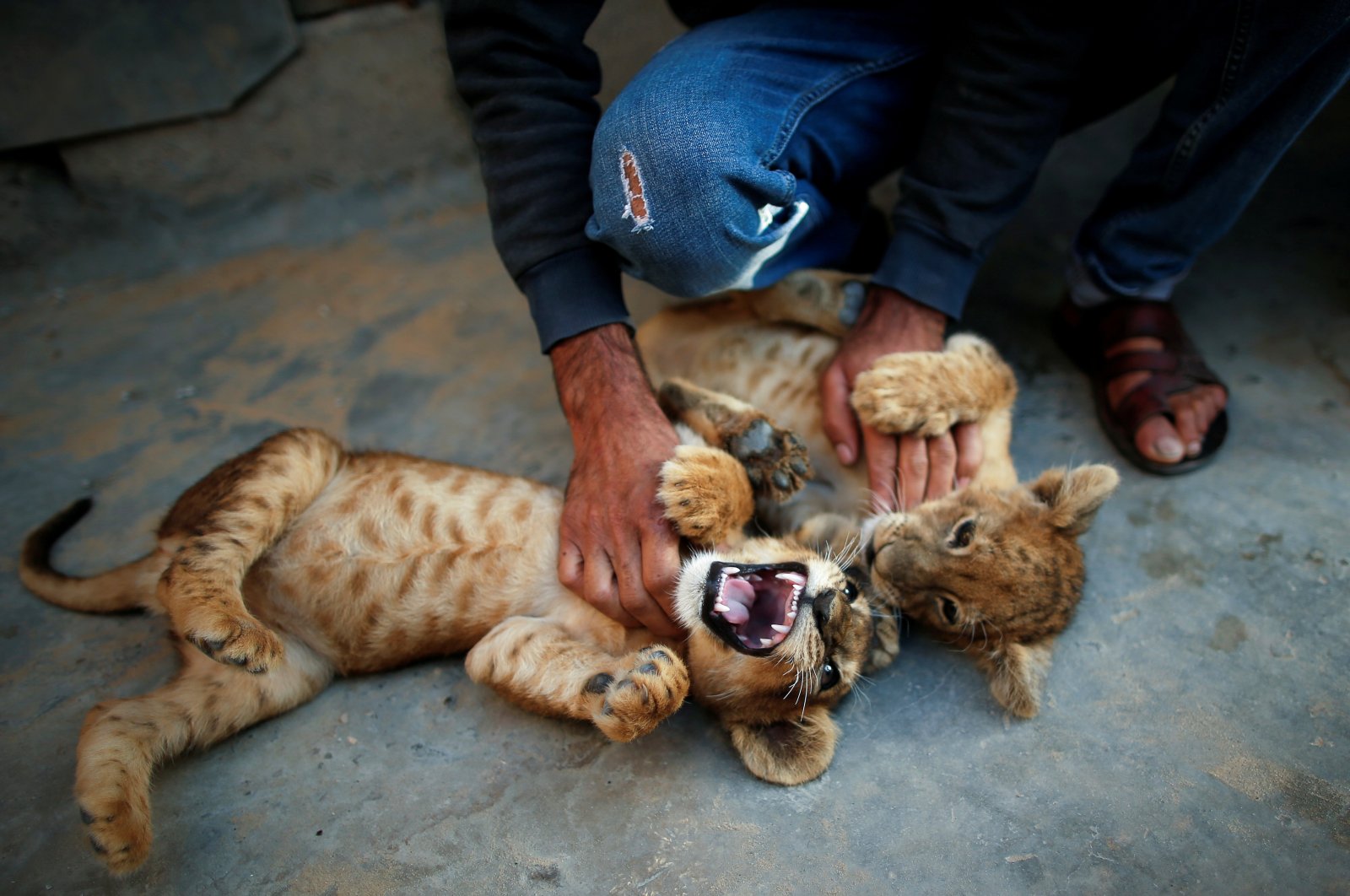 Palestinian man Naseem Abu Jamea plays with his pet lion cubs that he keeps on his house rooftop after buying them from a local zoo, in Khan Younis, in the southern Gaza Strip, Nov. 10, 2020. (Reuters Photo)
by REUTERS Nov 11, 2020 5:30 pm
RECOMMENDED

On the roof of an apartment block in one of Gaza's most crowded cities, two lion cubs prowl among the water tanks and dine on slaughtered chickens as children take selfies.

It is a bizarre sight even in a war-scarred Gaza Strip that has become accustomed to the unaccustomed.

The 75-day-old male and female cubs, Fathy and Filisteen (Palestine), have become playthings for bored neighbors of their owner, bakery owner Naseem Abu Jamea, though animal experts expressed concern on hearing of the situation.

Abu Jamea said he got the cubs from a local zoo but declined to give further details. As his nephews, brothers and neighbors' children played with the animals, he dismissed the risks.

"When you raise them as babies, a harmony will grow between both of you and (they) will not hurt you," he said.

However, Amir Khalil, a veterinarian who has led several trips to Gaza by the animal welfare organization Four Paws to rescue mistreated zoo animals, said he was alarmed to hear about the cubs.

"I advise the Gaza authorities to take away those lions," Khalil told Reuters by phone from Pakistan. "At the age of six months a lion becomes more dangerous as his size gets bigger and his muscles become stronger."

Khalil also expressed fears for the cubs' own welfare.

"Raising lions at home may deprive them of health, sufficient food and medical care and may result in acute health problems. Especially to the muscles, joints and bones," he said.

Gaza's zoos complain of a fall in visitor numbers, which harms their ability to feed and look after the animals properly.

Even before the coronavirus pandemic, they had to contend with an Israeli-led land, sea and air blockade, which controls the movement of people and goods in and out of Gaza, a 360-square-kilometer (139-square-mile) coastal strip run by the Palestinian group Hamas. Israel has tightened its 13-year blockade of Gaza's 2 million inhabitants while ramping up aggression against Palestinians through the use of collective punishment.

Asked about the lion cubs, Hassan Azzam, director of veterinary services at Gaza's agriculture ministry, said they had received no complaints, but that the ministry intended to investigate.

"Palestinian law does not permit raising wild animals in people's homes," he told Reuters. "Wild animals must be kept in proper zoo houses."

"I am not afraid. On the contrary, we are proud that we have lions in our area," said Wissam al-Qarra.