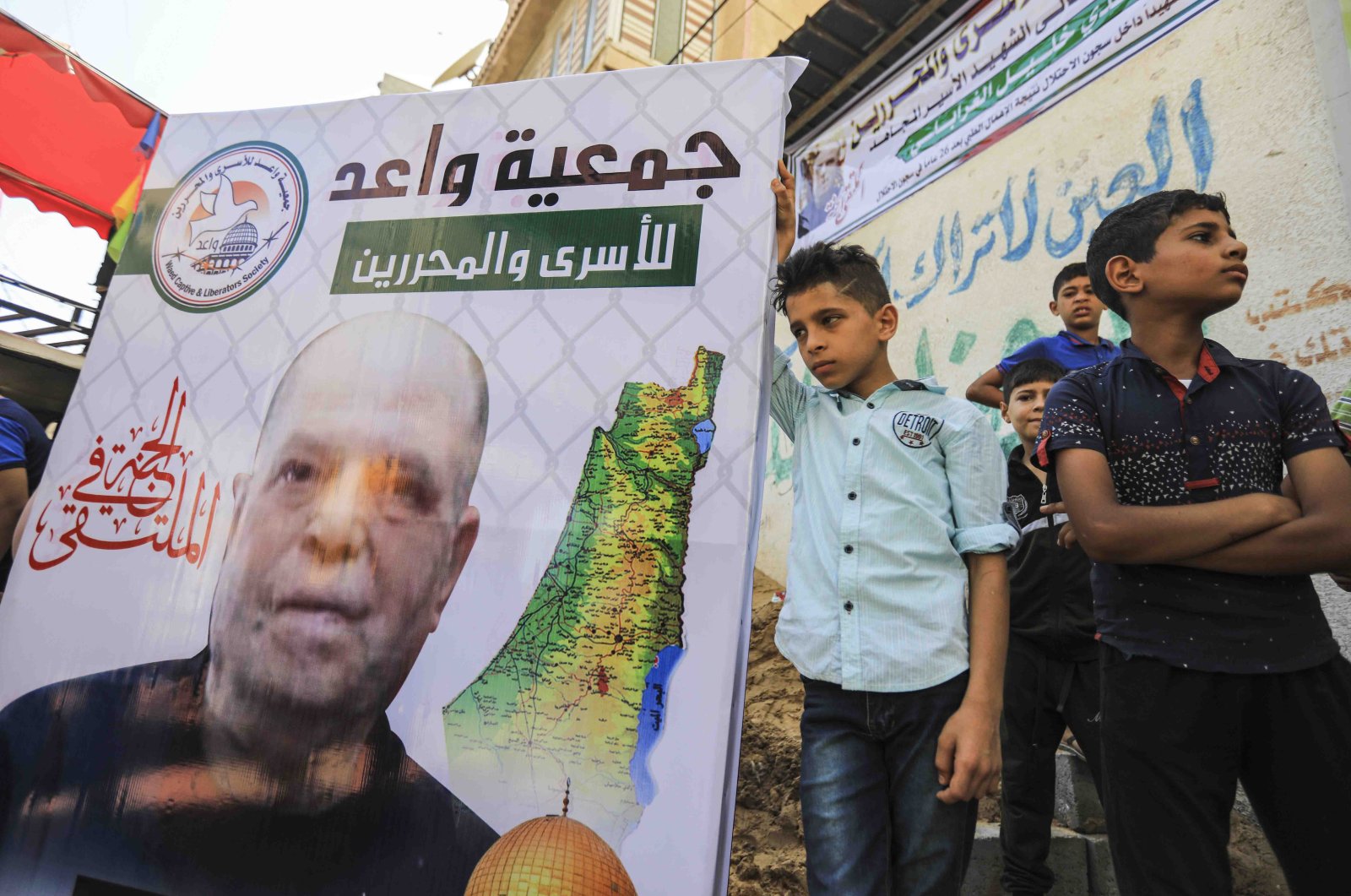 Youth stand next to a picture of Saadi al-Ghrabli (pictured), a Palestinian sentenced and imprisoned by Israel for life 26 years prior, outside a memorial service for him on the day of his death in Gaza City on July 8, 2020. (AFP Photo)
by Anadolu Agency Jul 11, 2020 12:37 pm
RECOMMENDED

Al-Gharabli, 75, died at Assaf Harofeh medical center last week after his health deteriorated, according to the Handala Center for Detainees and Ex-detainees.

Al-Gharabli, from the Gaza Strip, was arrested by Israeli forces in 1994 and sentenced to a lifetime in prison.

"The suffering of Palestinian detainees is exacerbated by the deliberate medical negligence by Israeli prison authorities," Abdel-Naser Ferwana of the Commission of Detainees' Affairs told Anadolu Agency (AA).

"Prison authorities deny medicines and necessary medical care to the detainees," he said.

Ferwana said Palestinian prisoners in Israel are subject to torture and physical and psychological pressures by the prison authorities. "They are deprived of family visits, which adds to their plight," he said.

Palestinian authorities estimate that over 5,500 Palestinians are currently languishing in prisons located throughout Israel.

According to the commission, 51 Palestinian prisoners have been held in Israel for over 20 years.

Around 224 Palestinian detainees are estimated to have died in Israeli prisons since 1967, five of them passed away this year.

Of these numbers, the commission estimates that 73 prisoners had died due to torture and 69 to medical negligence.

There are around 26 prisoners in Israeli custody, who were arrested by Israel before the signing of the Oslo Accords with the umbrella Palestine Liberation Organization (PLO) in 1993.

In 2013, Israel released 78 long-serving Palestinian prisoners as part of a U.S.-sponsored deal for the resumption of peace talks between the Palestinian Authority and Israel. Israel, however, refused to set free a fourth group of 26 prisoners under the deal.

In October 2011, Israel freed 1,027 prisoners under a prisoner swap deal with Palestinian resistance factions under which captured Israeli soldier Gilad Shalit was released.

Among the freed prisoners were 477 who were serving lifetimes in prison.

On the top of the list of the longest-serving prisoners in Israel is Kareem Younis, 62, who was detained in 1983 and sentenced to life in prison on accusations of killing an Israeli soldier.

His cousin Maher Younis, 61, who has spent 37 years in prison, is also serving a life sentence on similar accusations.

Nael al-Barghouti, 63, was also detained in 1978 and sentenced to life on charges of killing an Israeli soldier. Al-Barghouti was freed in 2011 under the prison swap deal with Palestinian factions, to be rearrested in 2014 along with 70 other freed prisoners.

Ferwana, who himself a former detainee, called for piling political and legal pressure on Israel "to provide protection to Palestinian detainees against Israeli violations and guarantee their release."

He went on to call for "taking serious measures in international arenas to bring Israel to justice over its practices against the detainees."