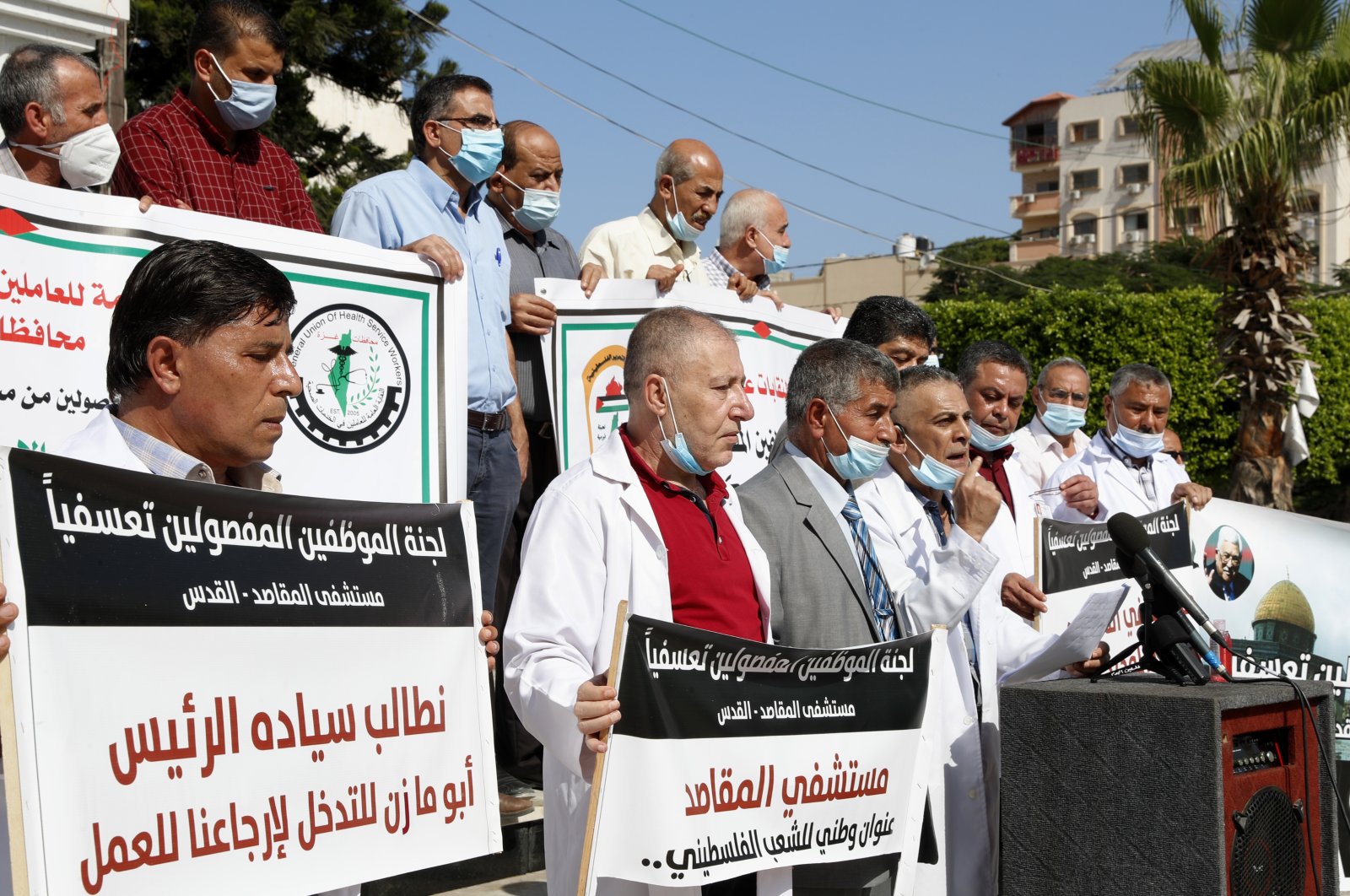 A group of nurses from the Gaza Strip staged a protest in a public square on Wednesday, saying an Israeli travel ban has led the Jerusalem hospital where they have worked for many years to fire them.

The seven nurses gathered at a public square in the Gaza Strip, wearing lab coats and holding banners that said: "Firing us is a death sentence on our profession and families.”

They directed their anger at both Israel, which has heavily restricted the entrance of Palestinians from the Hamas-ruled Gaza Strip, and at the decision by the Makassed hospital to lay them off. Each had worked there for at least 20 years.

"We never expected that Makassed would dismiss us arbitrarily,” said Baher Lulu, 53, a critical care nurse who said he joined the hospital 30 years ago, when travel from Gaza to Jerusalem did not require Israeli permission.

"This has hurt us and our families, which rely heavily on this income." The workers said they used to receive renewable three-month permits that allowed them to spend the week at Makassed and return home to Gaza each weekend.

Starting in 2016, however, they say Israeli authorities gradually stopped issuing permits. By 2019, all of them had lost the permits.

The medics say Israel cited security concerns. Israel imposed a blockade on Gaza in 2007 after the Palestinian movement Hamas seized control of the territory.

Under the blockade it restricts the entrance of Gazans to Israel citing security grounds.

The Coordinator of Government Activities in the Territories (COGAT), the Israeli defense body that oversees Palestinian civilian affairs, said it is forced to restrict access because Hamas "does not hesitate to promote terrorism by cynically exploiting the Gaza Strip's population.”

It said its rules for entry are available on its website, and every permit request "is thoroughly examined by the relevant professionals, subject to security considerations.”

Human rights groups have long criticized the permit process, saying its criteria are vague. An official from Makassed hospital, one of several in east Jerusalem serving Palestinians from the city, occupied West Bank and Gaza, declined to comment.

The nurses say the hospital asked them to volunteer at medical centers in their hometown until they could travel again but this summer, they received the dismissal letters with a patient who returned from treatment in Jerusalem.

The medical workers say Makassed has weathered a series of financial challenges, but they believe a decision by the Trump administration in 2018 to redirect American aid to east Jerusalem hospitals network elsewhere has left the hospital unable to continue paying their salaries.

The medical workers say there is no chance of finding full-time work in Gaza, where unemployment is close to 50% and it is especially difficult for people over 50 to get hired.