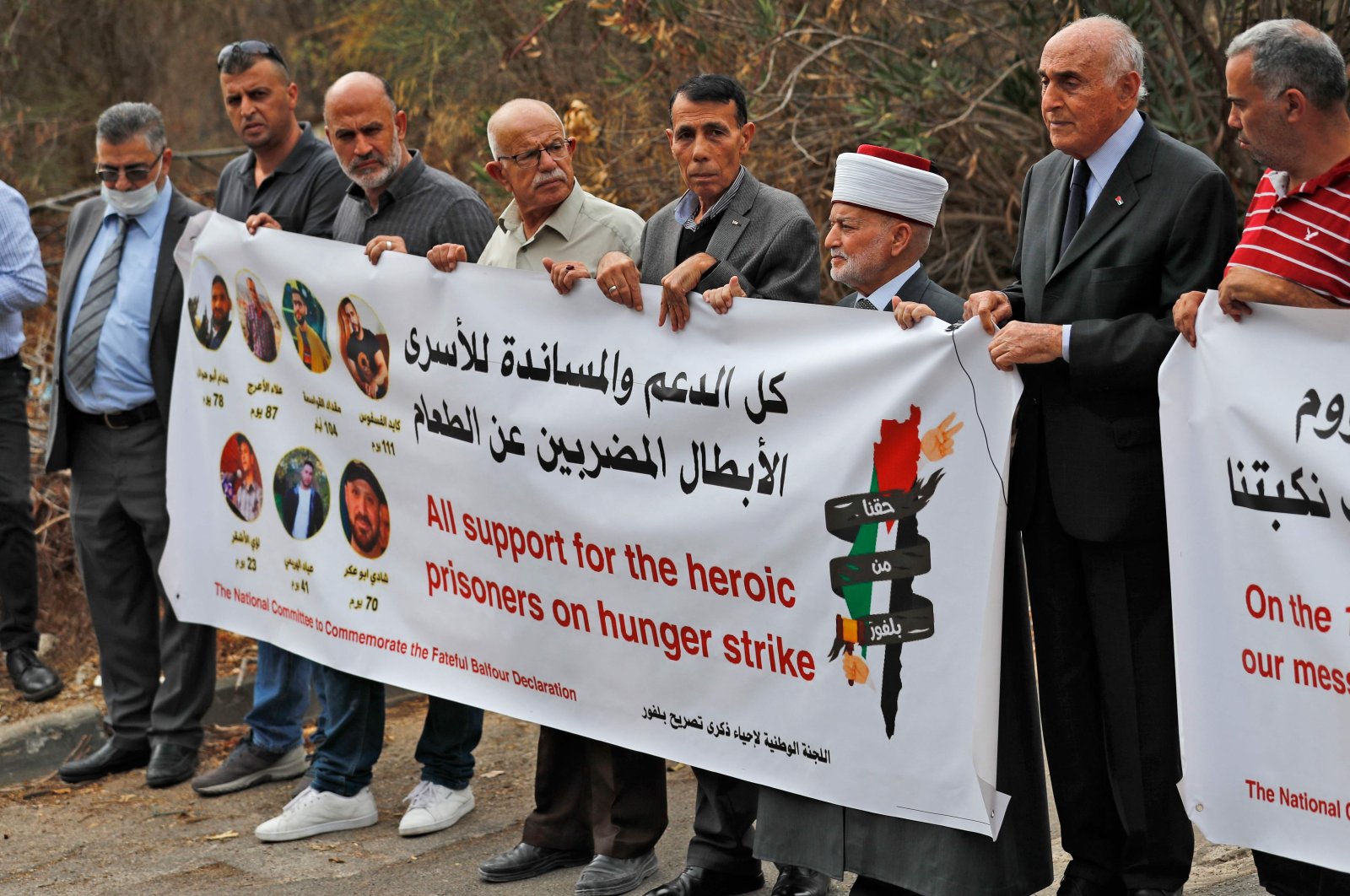 Palestinians take part in a protest against the 104th anniversary of Britain's Balfour Declaration, outside the British Consulate in East Jerusalem, occupied Palestine, on Nov. 2, 2021. (AFP Photo)
by Anadolu Agency Nov 02, 2021 8:46 pm
RECOMMENDED

On Nov. 2, Palestinians mark the 104th anniversary of the Balfour Declaration – a document that laid the groundwork for Israel's creation.

On this day, Britain granted the land of Palestine, which it did not own, to the Zionist movement to establish a "national home."

Amid dwindling support for the Palestinian struggle against the decades-long Israeli occupation, analysts believe that Palestinian chances to establish their own state are slimmer than ever.

On Oct. 10, Israeli Prime Minister Naftali Bennett cast more doubts on the possibility of the establishment of a Palestinian state, saying it "would highly likely mean a terror state a seven-minute (drive) from my own home, and from just about any place in Israel."

Following the Balfour Declaration, Arabs and Palestinians have been entangled in the decades-long conflict with Israel which has not officially ended yet despite moves by some Arab countries to normalize their relations with the latter.

Last year, four Arab countries – the United Arab Emirates (UAE), Bahrain, Morocco and Sudan – normalized their relations with Israel, in violation of the 2002 Arab Peace Initiative that stipulates Israeli withdrawal from lands occupied during the 1967 Arab–Israeli war as a prerequisite for establishing normal ties. To Palestinians, the normalization deals were "a stab in the back."

Britain occupied Palestine in 1917 after bloody battles with the army of the Ottoman Empire and worked to facilitate the immigration of Jews into the country in preparation for the establishment of the state of Israel in 1948.

In the declaration, dated Nov. 2, 1917, then-British Foreign Secretary Arthur Balfour tells Lord Lionel Walter Rothschild – a leader of the Zionist movement at the time – that the British government "views with favor the establishment in Palestine of a national home for the Jewish people."

The government, Balfour goes on to promise, "will use their best endeavors to facilitate the achievement of this object, it being clearly understood that nothing shall be done which may prejudice the civil and religious rights of existing non-Jewish communities in Palestine..."

Years later, after the Balfour Declaration and its contents became well-known, many in the Arab world – especially in Palestine – began referring to it as "the promise of those who do not own [i.e., the British] to those who do not deserve [i.e., the Zionists]."

Upon Britain's withdrawal from Palestine in 1948, Palestinian lands were captured by Zionist groups that expelled hundreds of thousands of Palestinians from their lands and proclaimed the creation of the State of Israel, an incident described by the Palestinians as the "nakba."

Some three-quarters of historical Palestine was thus brought under Israeli control while neighboring Jordan assumed control of the Palestinian West Bank and the Gaza Strip fell under Egyptian administration.

In 1967, Israel occupied the West Bank, including East Jerusalem, the Gaza Strip, alongside Egypt's Sinai Peninsula, and the Golan Heights in Syria.

After the signing of the Oslo Accords between Israel and the Palestine Liberation Organization (PLO) in 1993, the main cities in the West Bank (excluding Jerusalem) and the Gaza Strip were handed to the Palestinian National Authority (PNA).

On May 7, The Guardian newspaper regretted its support in 1917 for the Balfour Declaration, describing it as its "worst errors of judgment."

"The Guardian of 1917 supported, celebrated, and could even be said to have helped facilitate the Balfour Declaration," the British daily wrote, adding that the then editor, C.P. Scott, was "blinded" to Palestinian rights due to his support of Zionism.

"Whatever else can be said, Israel today is not the country the Guardian foresaw or would have wanted," read the report.

Muhammad Abu Hashem, a legal researcher at the Palestinian Center for Human Rights, said Britain and Israel bear "direct responsibility for all the massacres committed against the Palestinians in the occupied territories."

He blames the Balfour Declaration for laying the ground for Zionist massacres of Palestinians.

"The continuation of the occupation is an ongoing crime that is condemned by international law," Abu Hashem told Anadolu Agency (AA).

The researcher called for staging a campaign to pressure Britain "to issue an apology" on the calamitous declaration.

For Mustafa Ibrahim, a Palestinian writer and political analyst, the anniversary of the Balfour Declaration comes at a time when the Palestinian cause is facing a host of dangers.

He singled out the normalization of relations between some Arab states and Israel for being "dangerous" as it grants Tel Aviv "legitimacy" and weakens the Palestinian position.

Ibrahim called for an "end to the inter-Palestinian division (between Fatah and Hamas groups)" as the best remedy to the rising risks that he said make Palestinian hopes for an independent state "glimmer."