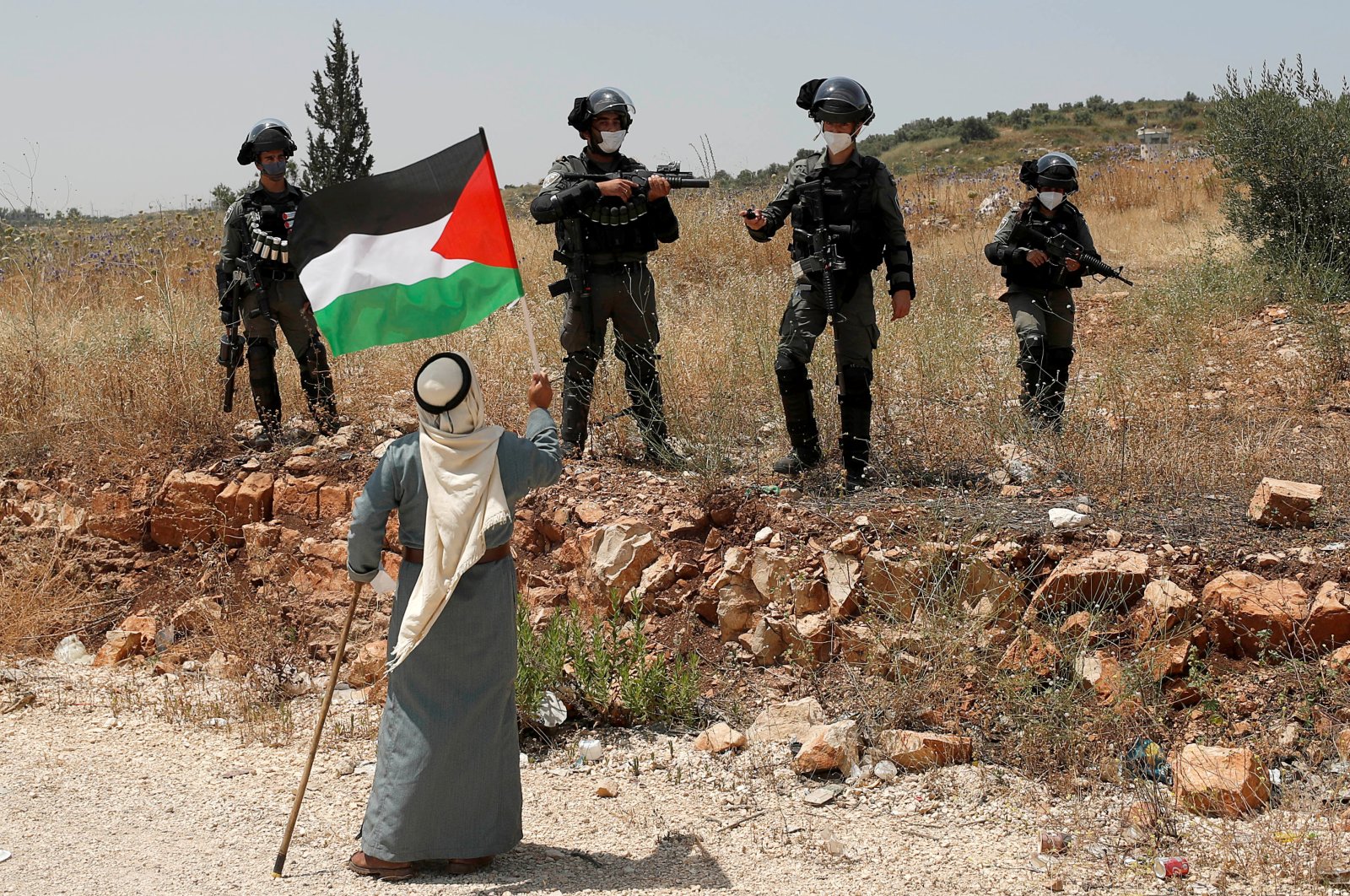 A demonstrator holds a Palestinian flag in front of Israeli forces during a protest against Israel's plan to annex parts of the occupied West Bank, near Tulkarm June 5, 2020. (Reuters Photo)
by Compiled from Wire Services Jun 05, 2020 5:31 pm
RECOMMENDED

Palestinians in the West Bank on Friday rallied to mark 53 years of Israeli occupation and protest against the Jewish state's plans to annex part of the territory.

In the northern West Bank's Tulkarem, dozens of demonstrators waved Palestinian flags and chanted slogans against Israeli settlements and the plans, which could move ahead as soon as next month.

An AFP reporter at the scene said that Israeli troops fired stun grenades and tear gas to repel protesters approaching a military checkpoint.

"This march shows our rejection of any plan of settlement or annexation," said Iyad Jarada, secretary of Palestinian president Mahmud Abbas's Fatah party in the city.

"This is our land and we will defend it with all our power and energy."

Near Tubas, also in the northern West Bank, a protester was wounded in the head by a rubber bullet fired by Israeli forces, the Palestinian Red Crescent said.

Further protests were taking place in the West Bank cities of Ramallah, Nablus, Jericho, and the Jordan Valley, which could be annexed as part of the Israeli plan.

In the southern West Bank city of Hebron, hundreds gathered, chanting against Israel's occupation, as well as anti-American slogans.

Palestinians are vocal in their opposition to U.S. President Donald Trump's Middle East plan, which gives Israel the green light to annex Jewish settlements and other strategic territories in the West Bank.

Such annexations would violate international law and likely inflame tensions in the volatile region.

Israel is expected to annex parts of the occupied West Bank under a plan agreed to by Prime Minister Benjamin Netanyahu and his rival-turned ally Benny Gantz, the head of the Blue and White party.

The plan comes as part of Trump's so-called "deal of the century," which was announced on Jan. 28. It refers to Jerusalem as "Israel's undivided capital" and recognizes Israeli sovereignty over large parts of the West Bank. The plan calls for the establishment of a Palestinian state in the form of an archipelago connected by bridges and tunnels.

Friday's protests coincided with the anniversary of what Palestinians call the Naksa, the defeat of Arab countries by Israel in the Six-Day War of June 1967.

Sinai was returned to Egypt in a 1979 peace accord with Israel but the Golan and east Jerusalem were annexed by the Jewish state.

Israeli troops and settlers vacated Gaza in 2005 but the coastal strip remains under blockade.

More than 450,000 Israelis live in settlements deemed illegal by international law in the West Bank, where 2.7 million Palestinians live.

In the Gaza Strip, demonstrators waved Palestinians flags and held placards saying "we will recover our land," at a rally organized by Hamas, the Islamist rulers of the enclave.