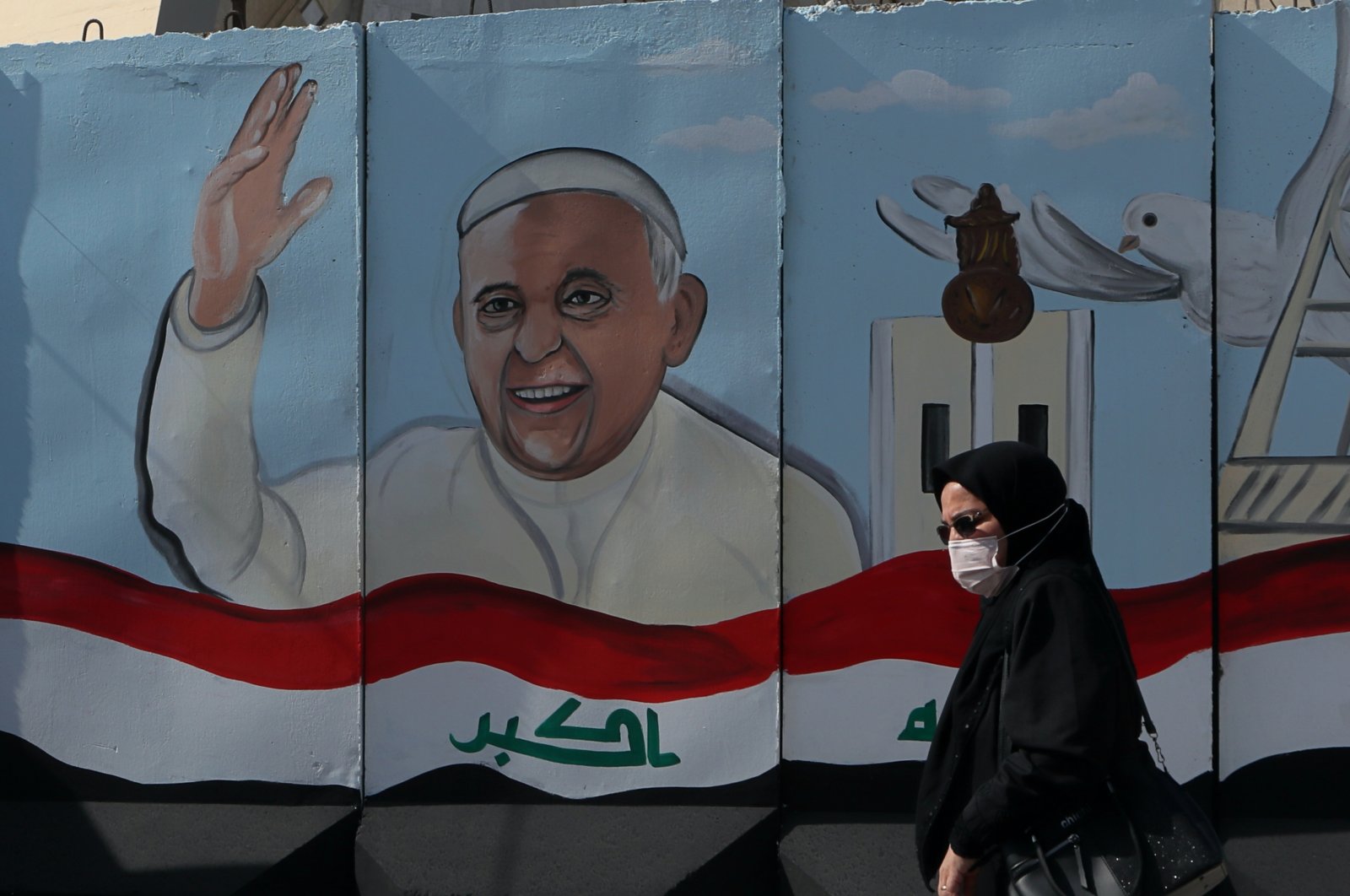 A woman walks past a mural depicting Pope Francis on a concrete wall placed by Iraqi security forces to surround the Our Lady of Salvation Church during preparations for the Pope's visit in Baghdad, Iraq, Monday, March 1, 2021. (AP Photo)
by French Press Agency - AFP
Mar 03, 2021 9:06 am

Pope Francis, on a historic trip to Iraq, will on Saturday hold a hugely symbolic meeting with Grand Ayatollah Ali al-Sistani, seeking to deepen his cautious dialogue with Muslim leaders.

The 84-year-old pope will visit the top Shiite cleric at his home in Najaf, the shrine city where Imam Ali, the fourth Islamic caliph and relative of the Prophet Mohammed, is buried.

Francis has long hailed the power of inter-religious dialogue, symbols of peace and tolerance, without dwelling on the theological subtleties advanced by his predecessor.

Benedict XVI, who resigned as pope eight years ago, provoked years of cool relations with the Muslim world when in 2006 he quoted criticisms of the Prophet Mohammed by a 14th-century Byzantine Christian emperor.

They made a joint call for freedom of belief, although what stands out from that trip, the first by a pope to the Arabian Peninsula, was the image of the leader of the world's 1.3 million Catholics embracing a Sunni imam.

Sunnis account for almost 90% of the world's Muslims, Shiites 10%, the majority in Iran and Iraq. In Iraq, the population is 60% Shiite and 37% Sunni.

With the visit to Najaf and meeting with the Shiite cleric al-Sistani, the pope is extending his hand to the other main branch of Islam.

"It's certainly an unprecedented event and a big deal," said Marsin Alshamary, a researcher at the Brookings Institution.

She said the Najaf school of thinking on Islam became involved in the inter-religious dialogue in the wake of the U.S.-led invasion of Iraq in 2003, and the bloody civil war between Shiites and Sunnis.

Al-Sistani has repeatedly stated that Muslims are forbidden from killing others. In 2014, however, as the terrorist group Daesh approached Baghdad, he called on Iraqis to take up arms to drive the extremists out.

"This visit by the pope sends a strong political message for a figure who is very much associated with the defence of Iraqis," Myriam Benraad, a French political scientist who specializes in the Arab world, told Agence France-Presse (AFP).

Al-Sistani embodies one of the two currents of modern Shiism, that of Najaf, which makes a distinction between politics and religion.

By contrast, the school based around the holy Iranian city of Qom believes that the top religious leader should also rule the state, following the example of Iran's supreme leader Ayatollah Ali Khamenei.

"The Shiites in Iraq want the Vatican and the western world to support them against the hold that Iran has, which wants to swallow Najaf," said Iraqi Dominican friar Amir Jaje, a leading figure in inter-religious dialogue.

Since the pope's visit was announced, the Shiite clergy has worked hard to ensure it includes a trip to Najaf.

The historian Pierre-Jean Luizard, a specialist on Iraq, noted that al-Sistani is also aware of "a moment of despair and disaffection towards everything sacred," particularly among the young, and cannot ignore the pope's global stature.

The pope never stops distributing the Abu Dhabi document and has also published an encyclical, "Fratelli tutti" (All Brothers), which includes numerous references to it.

The Abu Dhabi document called for the freedom of belief and expression, advocating full citizenship for "minorities."