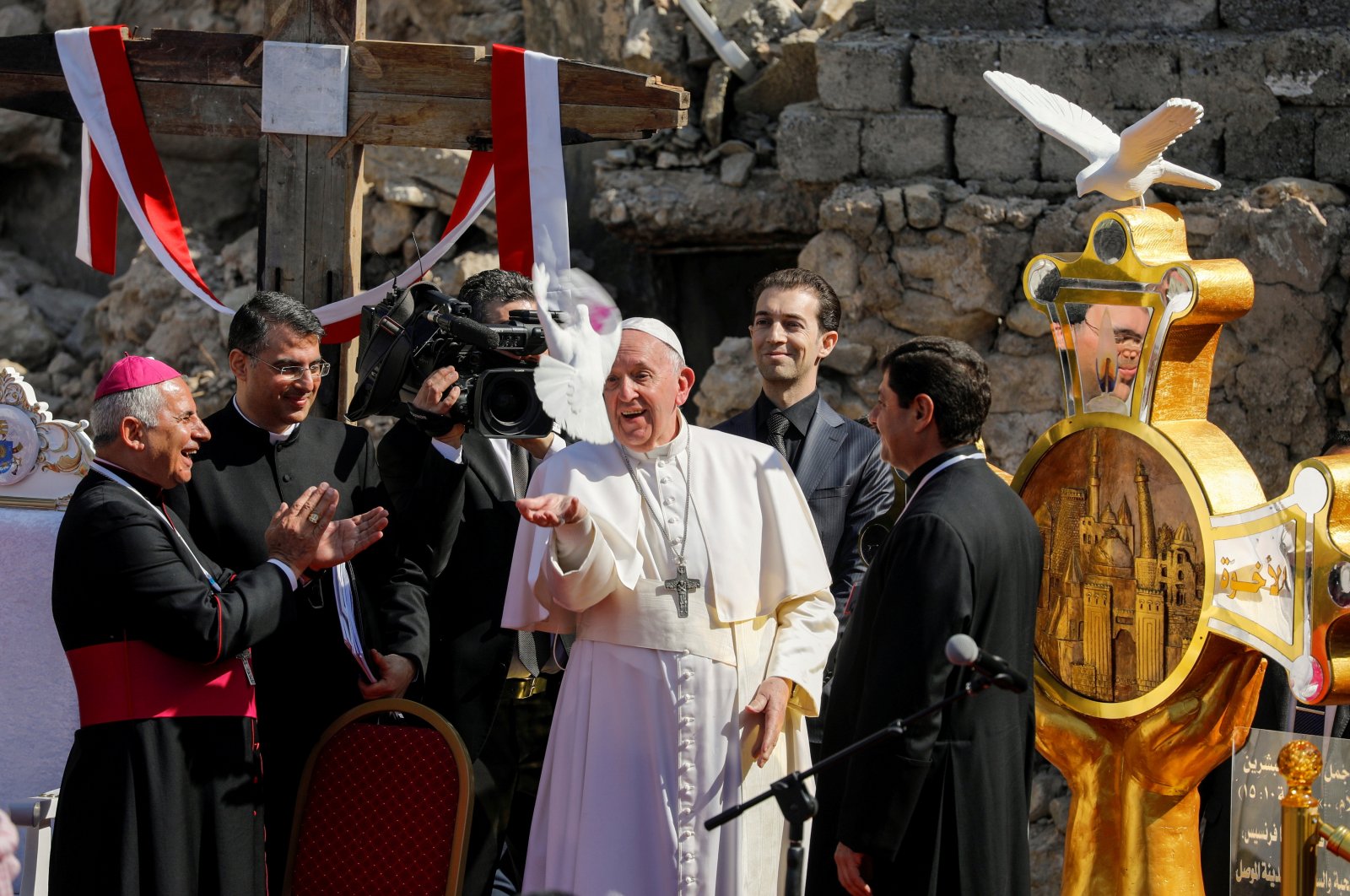 Pope Francis made an emphatic appeal for peaceful coexistence in Iraq on Sunday as he prayed for the country's war dead amid the ruins of four demolished churches in Mosul, which suffered widespread destruction in the war against the Daesh terrorist group.

Francis traveled to northern Iraq on the final day of his historic visit to minister to the country’s dwindling number of Christians, who were forced to leave their homes en masse when Daesh militants overtook vast swaths of northern Iraq in the summer of 2014.

Few have returned in the years since Daesh was routed in 2017, and Francis came to Iraq to encourage them to stay and help rebuild the country and restore what he called its "intricately designed carpet” of faith and ethnic groups.

For the Vatican, the continued presence of Christians in Iraq is vital to keeping alive faith communities that have existed here since the time of Christ. In a scene unimaginable just four years ago, the pontiff mounted a stage in a city square surrounded by the remnants of four heavily damaged churches belonging to some of Iraq’s myriad Christian rites and denominations. A jubilant crowd welcomed him.

"How cruel it is that this country, the cradle of civilization, should have been afflicted by so barbarous a blow, with ancient places of worship destroyed and many thousands of people – Muslims, Christians, Yazidis – who were cruelly annihilated by terrorism – and others forcibly displaced or killed,” Francis said.

He deviated from his prepared speech to address the plight of Iraq's Yazidi minority, which was subjected to mass killings, abductions and sexual slavery at the hands of Daesh. "Today, however, we reaffirm our conviction that fraternity is more durable than fratricide, that hope is more powerful than hatred, that peace more powerful than war.”

The square where he spoke is home to four different churches – Syro-Catholic, Armenian-Orthodox, Syro-Orthodox and Chaldean – each of them left in ruins.

Daesh overran Mosul in June 2014 and declared a caliphate stretching from territory in northern Syria deep into Iraq’s north and west. It was from Mosul’s al-Nuri mosque that the group’s leader, Abu Bakr al-Baghdadi, made his only public appearance.

Mosul held deep symbolic importance for Daesh and became the bureaucratic and financial backbone of the group. It was finally liberated in July 2017 after a ferocious nine-month battle. Between 9,000 and 11,000 civilians were killed, according to The Associated Press (AP) investigation at the time. Al-Baghdadi was killed in a U.S. raid in Syria in 2019.

The Vatican hopes that the landmark visit will rally the country’s Christian communities and encourage them to stay despite decades of war and instability. Throughout the visit, Francis has delivered a message of interreligious tolerance and fraternity to Muslim leaders, including in a historic meeting Saturday with Iraq’s top Shiite cleric, Grand Ayatollah Ali al-Sistani.

The Rev. Raed Kallo was among the few who returned to Mosul after Daesh was defeated.

"I returned three years ago and my Muslim brothers received me after the liberation of the city with great hospitality and love,” he said on stage before the pontiff. Kallo said he left the city in June 10, 2014, when Daesh overran the city. He had a parish of 500 Christian families, most of whom have emigrated abroad. Now only 70 families remain.

"But today I live among 2 million Muslims who call me their Father Raed," he said.

Gutayba Aagha, the Muslim head of the Independent Social and Cultural Council for the Families of Mosul, encouraged other Christians to return.

"In the name of the council, I invite all our Christian brothers to return to this, their city, their properties and their businesses.”

Francis will later travel by helicopter across the Nineveh plains to the small Christian community of Qaraqosh, where only a fraction of families have returned after fleeing the Daesh onslaught in 2014. He will hear testimonies from residents and pray in the Church of the Immaculate Conception, which was believed to have been torched by Daesh and has been restored in recent years.

He wraps up the day with a Mass in the stadium in Irbil, in the semi-autonomous northern Kurdish region, that is expected to draw as many as 10,000 people. He arrived in Irbil early Sunday, where he was greeted by children in traditional dress and one outfitted as a pope.

Public health experts had expressed concerns ahead of the trip that large gatherings could serve as superspreader events for the coronavirus in a country suffering from a worsening outbreak where few have been vaccinated.

The Vatican has said it is taking precautions, including holding the mass outdoors in a stadium that will only be partially filled. But throughout the visit, crowds have gathered in close proximity, with many people not wearing masks.

The pope and members of his delegation have been vaccinated but most Iraqis have not. Iraq declared victory over Daesh in 2017, and while the extremist group no longer controls any territory it still carries out sporadic attacks, especially in the north.

The country has also seen a series of recent rocket attacks by Iran-backed militias against U.S. targets, violence linked to tensions between Washington and Tehran. The Daesh group's brutal three-year rule of much of northern and western Iraq, and the grueling campaign against it, left a vast swathe of destruction.

Reconstruction efforts have stalled amid a years-long financial crisis, and entire neighborhoods remain in ruins. Many Iraqis have had to rebuild their homes at their own expense. Iraq's Christian minority was hit especially hard.

The militants forced them to choose between conversion, death or the payment of a special tax for non-Muslims. Thousands fled, leaving behind homes and churches that were destroyed or commandeered by the extremists. Iraq's Christian population, which traces its history back to the earliest days of the faith, had already rapidly dwindled, from around 1.5 million before the 2003 U.S.-led invasion that plunged the country into chaos to just a few hundred thousand today.