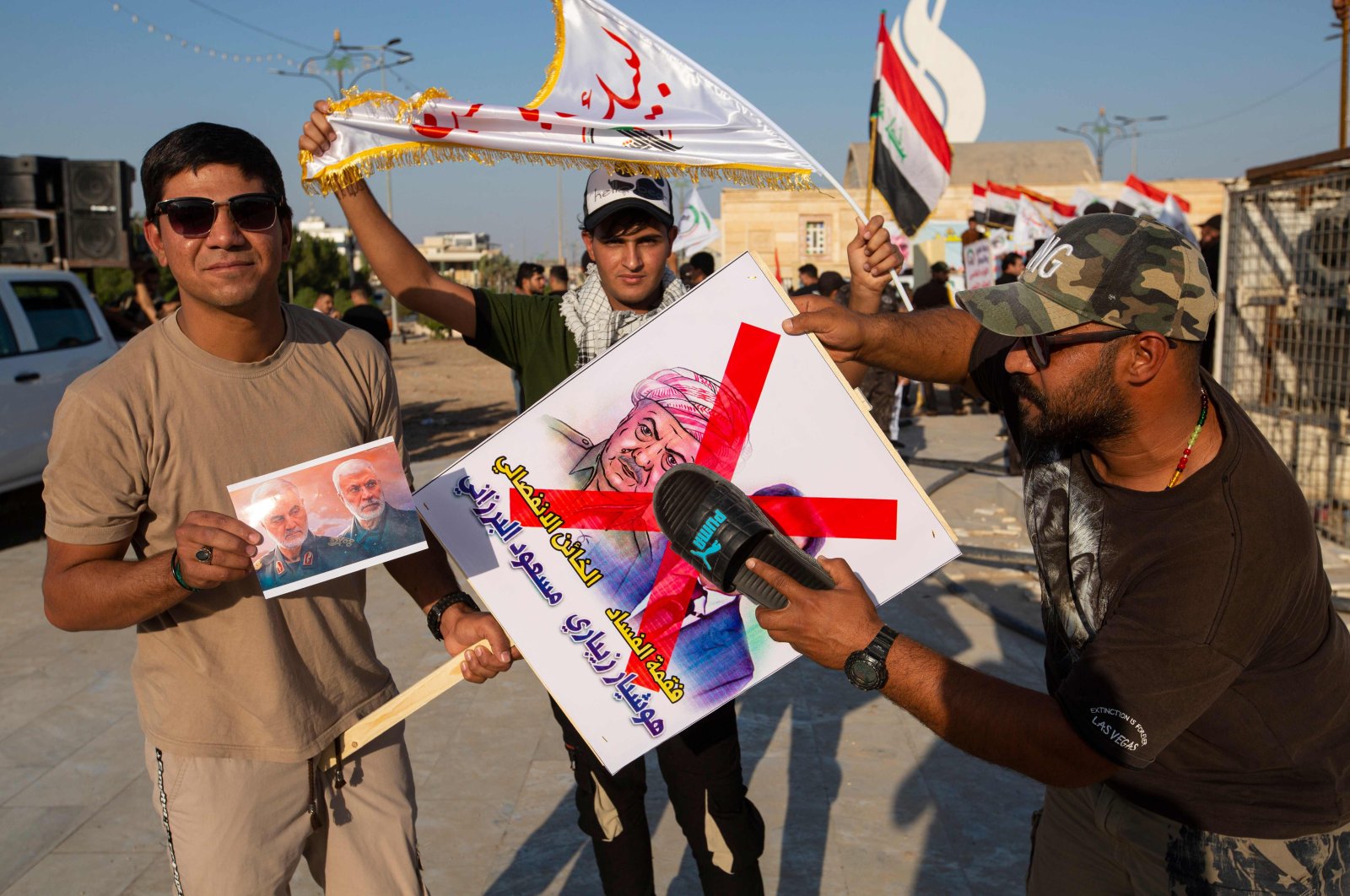 A supporter of Hashed al-Shaabi hits a poster bearing the portraits of Kurdish ex-minister Hoshyar Zebari and Kurdish leader Masoud Barzani with a slipper while a fellow protester carries the portraits of slain Iranian commander Qassem Soleimani and Iraqi paramilitary commander Abu Mahdi Al-Muhandis during a protest in support of the Hashed in the southern Iraqi city of Basra on October 17, 2020. (AFP Photo)
by French Press Agency - AFP Oct 17, 2020 7:39 pm
RECOMMENDED

Supporters of Hashd al-Shaabi, an Iraqi paramilitary network dominated by Iran-backed factions, Saturday burned down the main Kurdish party's headquarters in Baghdad after criticism from a Kurdish ex-minister.

Hundreds of Hashd demonstrators swept past a security detail and stormed into the offices of the Kurdistan Democratic Party (KDP), which runs the Kurdish autonomous region in northern Iraq, and torched them.

Protesters burned Kurdish flags while others carried posters of Iranian general Qasem Soleimani and his Iraqi lieutenant Abu Mahdi al-Muhandis, who were killed in a U.S. drone strike near Baghdad airport last January.

The Hashd paramilitaries were formed in 2014 from mostly-Shiite armed groups.

Hashd has since been formally integrated into Iraq's armed forces and has representation in parliament, and it has spawned several ideologically affiliated armed groups.

Earlier this month, Hoshyar Zebari, Iraq's longtime former foreign minister and a key Kurdish power-broker, said the government needed to "clean up the Green Zone (in Baghdad) from the presence of Hashd militias."

They were operating "outside the law," Zebari, a KDP member, said in comments to the U.S.-funded Al-Hurra television.

Kurdish president Nechirvan Barzani condemned Saturday's vandalism as "an act of sabotage" but also struck a unifying tone by noting that Hashd's fighters had battled alongside Kurdish peshmerga forces in defeating Daesh.

But Massoud Barzani, the KDP's veteran head, called on the Baghdad government to hold the assailants accountable.

"Those who attack the KDP and make a mockery of the values of Kurdistan's people will pay the price for their actions," he said.

Vian Sabry, head of the KDP bloc in the Iraqi parliament, blamed "unaccountable factions for being behind such acts," without elaborating.

On October 1, Kurdish authorities accused Hashd militants of firing rockets at the airport in Irbil, the capital city of Iraqi Kurdistan, where U.S. troops are based.

Around 90 rocket attacks have targeted the United States' presence in Iraq since the January drone strike, with several claimed by pro-Iran factions.

Washington has warned it will not tolerate attacks on U.S. interests in Iraq by Iran-backed militias.

"We can't tolerate the threats to our people, our men and women serving abroad," David Schenker, assistant secretary of state, for near Eastern affairs, told reporters at the start of the month.

Schenker did not confirm or deny a reported U.S. threat to withdraw its troop and close its embassy in Baghdad.

Several political and diplomatic sources have told the Agence France-Presse (AFP) that U.S. Secretary of State Mike Pompeo issued an ultimatum that all U.S. personnel would leave Iraq unless the government puts a stop to a rash of attacks against them.