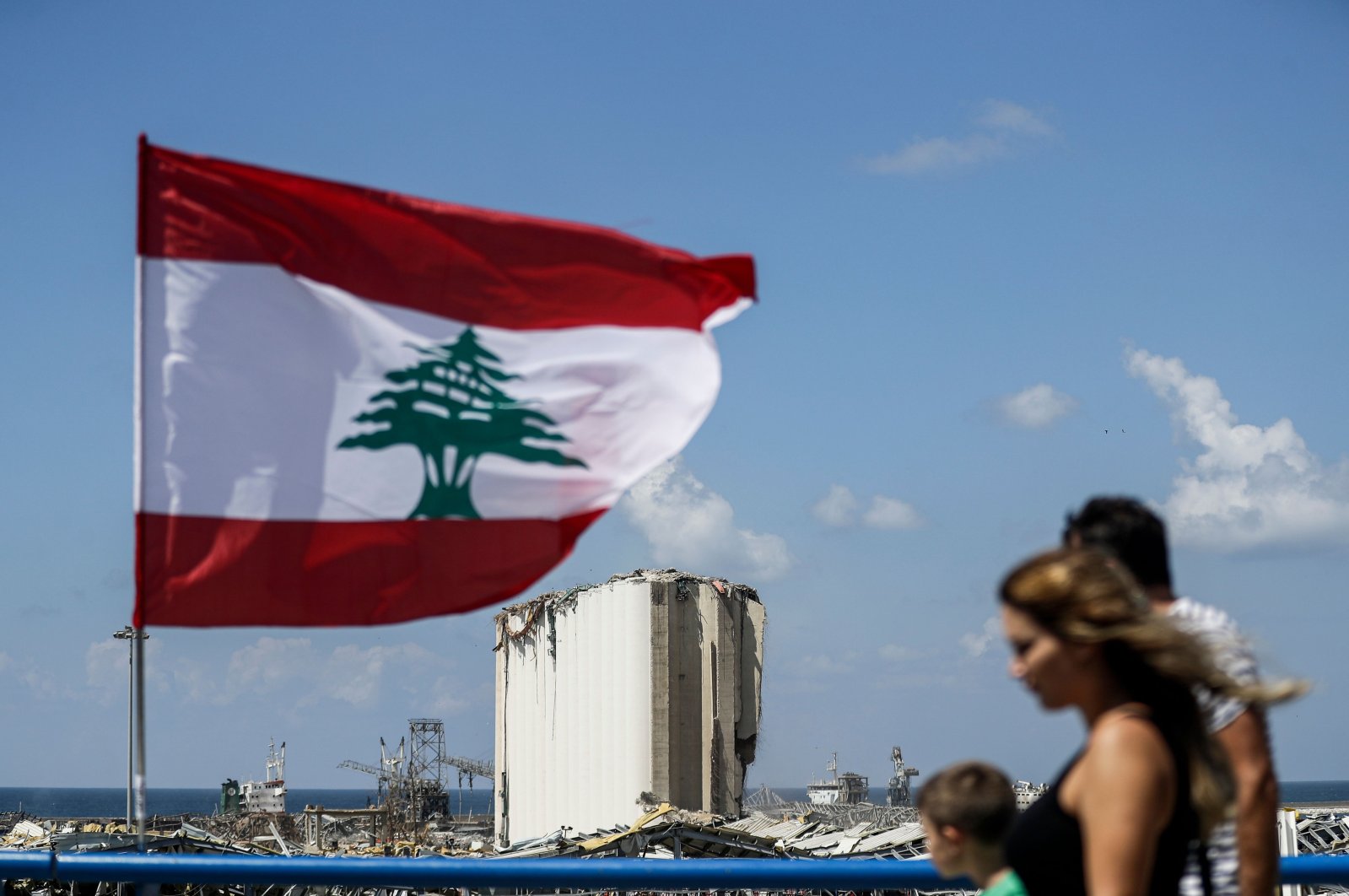 People walk along a bridge past a Lebanese flag flying near the port of Lebanon's capital Beirut as damaged grain silos in the background, Beirut, Lebanon, Aug. 9, 2020. (AFP Photo)
by Agencies Aug 09, 2020 3:36 pm
RECOMMENDED

Protests erupted in Lebanon over this week's devastating explosion in Beirut, and the country's top Christian Maronite cleric said the Cabinet should resign. Two of the ministers heeded the call.

Information Minister Manal Abdel-Samad said in her resignation letter that change remained “elusive,” and she regrets failing to fulfill the aspirations of the Lebanese people.

“Given the magnitude of the catastrophe caused by the Beirut earthquake that shook the nation and hurt our hearts and minds, and in respect for the martyrs, and the pains of the wounded, missing and displaced, and in response to the public will for change, I resign from the government," she wrote.

Later on Sunday, environment minister Damianos Kattar also resigned, saying in a statement that the government had lost a number of opportunities to reform.

Prime Minister Hassan Diab met with his Cabinet reportedly to discuss the resignations Sunday, but there were no comments after the meeting.

Protesters have called on the government to quit over what they say was negligence that led to Tuesday's explosion. Anger boiled over into violent scenes in central Beirut Saturday.

Christian Maronite Patriarch Bechara Boutros al-Rai said the Cabinet should resign as it cannot "change the way it governs."

"The resignation of an MP or a minister is not enough ... the whole government should resign as it is unable to help the country recover," he said in his Sunday sermon.

Saturday's protests were the biggest since October when thousands of people took to the streets to demand an end to corruption, bad governance and mismanagement.

About 10,000 people gathered at Martyrs' Square, which was transformed into a battle zone in the evening between police and protesters who tried to break down a barrier along a road leading to parliament. Some demonstrators stormed government ministries and the Association of Lebanese Banks.

People defied dozens of tear gas canisters fired at them and hurled stones and firecrackers at riot police, some of whom were carried away to ambulances. One policeman was killed and the Red Cross said more than 170 people were injured.

"The police fired at me. But that won't stop us from demonstrating until we change the government from top to bottom," Younis Flayti, 55, a retired army officer, said Sunday.

Nearby, mechanic Sabir Jamali sat beside a noose attached to a wooden frame in Martyrs' Square, intended as a symbolic warning to Lebanese leaders to resign or face hanging.

"Every leader who oppresses us should be hanged," he said, adding he will protest again.

Soldiers in vehicles mounted with machine guns were stationed beside the square Sunday.

Tuesday's catastrophic explosion killed 158 people and injured more than 6,000, destroying parts of the city and compounding months of political and economic meltdown.

"People should sleep in the streets and demonstrate against the government until it falls," said lawyer Maya Habli, as she surveyed the demolished port where the blast erupted.

The prime minister and presidency have said 2,750 tons of highly explosive ammonium nitrate, which is used in making fertilizers and bombs, had been stored for six years without safety measures at the port warehouse.

The government has said it will hold those responsible to account.

Tuesday's blast, which was felt across the county and as far as the island of Cyprus, was recorded by the sensors of the American Institute of Geophysics (USGS) as having the power of a magnitude 3.3 earthquake. It was triggered by a fire in a port warehouse, where a huge shipment of hazardous ammonium nitrate, a chemical that can be used as a fertilizer or as an explosive, had languished for years, according to the authorities. The huge blast also wounded at least 6,000 people and displaced more than 300,000 from their destroyed or damaged homes.

The revelation that the chemicals had languished for years like a ticking time bomb in the heart of the capital has served as shocking proof to many Lebanese of the rot at the core of the state apparatus. Demonstrators on Sunday called for renewed anti-government rallies after a night of angry protests saw them storm several ministries before being expelled by the army. It was a new tactic for a protest movement that emerged last October to demand the removal of a political class long accused of being inept and corrupt.

"The explosion in the port has left a crater 43 meters deep," the Lebanese security official told Agence France-Presse (AFP), citing assessments by French experts working in the disaster area. The crater is much larger than the one left by the enormous blast in 2005 that killed former Prime Minister Rafic Hariri, which measured 10 meters (32.8 feet) across and 2 meters deep, according to an international tribunal investigating his murder. French rescue and police teams are among a much larger group of international emergency response specialists that have flooded into Lebanon to ease pressure on local authorities unable to cope with the disaster relief on their own. Qatari, Russian and German rescuers are also working at the port blast site.