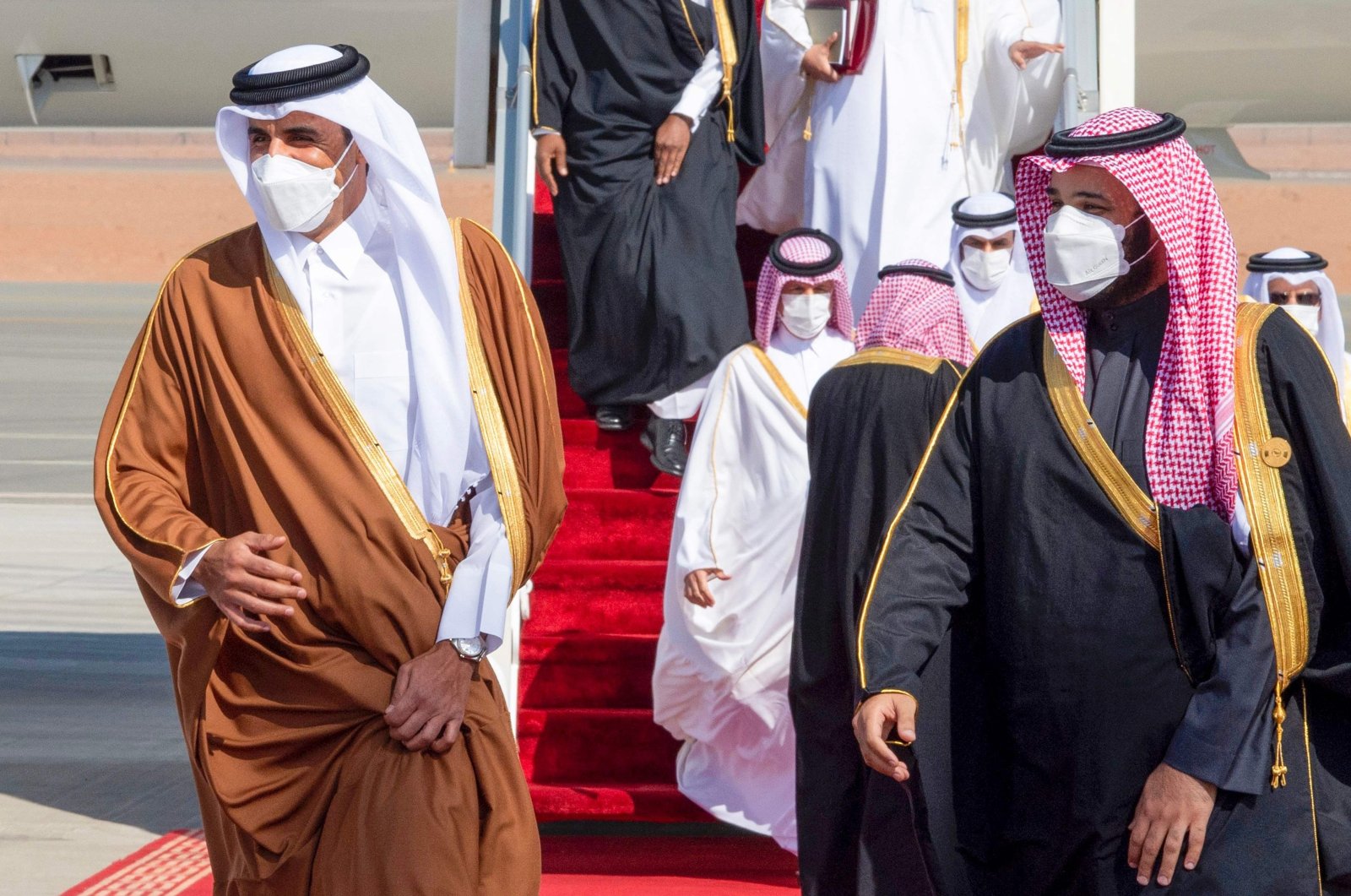 A long-running feud between Qatar and the Saudi-led coalition may well be coming to an end as Gulf Arab leaders gathered in Saudi Arabia on Tuesday for a summit that is expected to see formal agreement toward reconciliation of the disagreements that shattered Gulf unity.

More than a week after the Gulf Cooperation Council (GCC) said that Qatar's ruler was invited to the bloc's summit meeting amid efforts to heal rifts between Doha and a Saudi-led alliance, Emir Sheikh Tamim bin Hamad Al Thani arrived in Saudi Arabia and was greeted with an embrace by the kingdom's crown prince on Tuesday, following an announcement that Riyadh would end its yearslong embargo on the Gulf Arab state. The decision to open borders was the first major step toward ending the diplomatic crisis that has deeply divided U.S. defense partners, frayed societal ties and tore apart a traditionally clubby alliance of Arab states.

The arrival of Sheikh Tamim to the kingdom's ancient desert city of Al-Ula was broadcast live on Saudi TV. He was seen descending from his plane and being greeted with a hug by Saudi Crown Prince Mohammed bin Salman (MBS).

The diplomatic breakthrough comes after a final push by the outgoing Trump administration and fellow Gulf state Kuwait to mediate an end to the crisis. It wasn’t until late Monday – on the eve of the summit of Gulf Arab leaders and just ahead of U.S.President-elect Joe Biden’s swearing in – that the major step to ending the spat was announced.

The Qatari emir has only attended the GCC summit once – when it was hosted by Kuwait – since the blockade was launched. The following two summits were held in Saudi Arabia, and he instead sent an envoy. While the Saudi decision to end its embargo marks a key milestone toward resolving the Gulf spat, the path toward full reconciliation is far from guaranteed. The rift between Abu Dhabi and Doha has been deepest, with the United Arab Emirates (UAE) and Qatar at sharp ideological odds. The UAE's minister of state for foreign affairs, Anwar Gargash, tweeted late Monday that his country was keen to restore Gulf unity. However, he cautioned: "We have more work to do and we are in the right direction.”

The annual summit was expected to also see some form of detente between Qatar and the UAE, Egypt and Bahrain. The meeting in Al-Ula would traditionally be chaired by Saudi King Salman, though his son and heir, the crown prince, may instead lead the meeting. Sheikh Tamim is expected to attend a signing ceremony with Prince Mohammed to declare a new page in relations. This year, Egypt's foreign minister is also attending the summit of the six-nation GCC, which is comprised of Saudi Arabia, the UAE, Bahrain, Kuwait, Oman and Qatar.

The Saudi move toward reconciliation with Qatar comes just weeks after U.S. President Donald Trump's advisor and son-in-law, Jared Kushner, visited the kingdom and Qatar to secure an end to the rift. Kushner has reportedly been invited to attend the signing ceremony in Al-Ula. Normalization with Qatar could buy Saudi Arabia time to strike compromises with the Biden administration on other issues, like its war in Yemen and potential U.S. reengagement with Iran, said Samuel Ramani, a nonresident fellow at the Gulf International Forum.

"Saudi Arabia could frame a partial detente, which allows Qatari civilian planes to fly over Saudi airspace and deescalates the information war, as proof of ‘new thinking’ in Riyadh,” Ramani said ahead of the announcement. At heart have been concerns that Qatar's close relations with Turkey and Iran have undermined regional security.

Patriotic fervor swept through Qatar in support of Sheikh Tamim's resolve. Gas-rich Qatar also took an economic hit from the blockade, and its national airline was forced to take longer and more costly routes. It was unclear how the blockade would impact its ability to host the 2022 FIFA World Cup.

Riyadh – along with Bahrain, UAE and Egypt – cut all ties with Qatar in June 2017, accusing Doha of being too close to Iran and supporting “terrorism.” The Saudi-led coalition issued 13 sweeping demands, including the closure of the Doha-based Al-Jazeera news network and the shuttering of a Turkish military base, in order to end the Qatar blockade, also known as the Gulf crisis. They also demanded Doha curb relations with Riyadh's archrival, Iran. Qatar rejected the demands, calling them "unrealistic" and "not actionable," leading to a stalemate. Four countries announced their stunning blockade on Qatar and cut all transport and diplomatic links with it. The move separated families who'd intermarried with Qataris and ended years of visa-free travel for Qataris in parts of the Gulf. It also pushed Qatar diplomatically closer to Turkey.

Gulf leaders signed a “solidarity and stability” agreement, MBS announced Tuesday, saying that "these efforts helped us reach the agreement of the Al-Ula statement that will be signed at this summit, where we affirm our Gulf, Arab and Islamic solidarity and stability." He also thanked the United States and Kuwait for their mediation.

"There is a desperate need today to unite our efforts to promote our region and to confront challenges that surround us, especially the threats posed by the Iranian regime's nuclear and ballistic missile programme and its plans for sabotage and destruction."

Meanwhile, Turkey welcomed the end of a nearly three-year feud. Shortly after Monday's announcement that Doha and Riyadh had agreed to reopen their airspace and borders, the Turkish Foreign Ministry praised Kuwait's role in the recent agreement and hailed "international actors" who contributed to the decision-making through their mediation and facilitation activities.

"We welcome the decision to open land, sea and air borders between Qatar and Saudi Arabia as of tonight," it said in a statement on Monday. "This development constitutes an important step toward resolving the conflict in the Gulf region that has been going on since June 2017," the ministry added.

It expressed "hope" for a "comprehensive and permanent" resolution of the Gulf dispute "on the basis of mutual respect for the sovereignty of the countries and that other sanctions against the people of Qatar will be lifted as soon as possible."

"Our country, which is a strategic partner of the Gulf Cooperation Council and places great importance to the security and stability of the Gulf region, will continue to support all efforts in this direction," the statement added.

Since the start of the Gulf rift, Ankara emerged as one of Qatar's top partners, sending additional troops and food to meet Qatar's needs just after the embargo began. In 2017, the Turkish Parliament approved a bill supporting the deployment of Turkish troops in Doha. Turkey's open and immediate support and deployment of Turkish troops to deter any military escalation against Qatar prevented further repercussions the country might have encountered.

Almost two months ago, Ankara and Doha inked 10 new agreements that aim to further strengthen bilateral ties between the two countries. The deals were signed after the sixth meeting of the Turkey- Qatar Supreme Strategic Committee that was held in Ankara and chaired by the leaders of the countries on Nov. 26. President Recep Tayyip Erdoğan welcomed Sheikh Tamim with an official ceremony, after which the two leaders held an inter-delegation meeting.

Turkey and Qatar have strengthened military and economic ties in recent years and have signed a total of 52 agreements and five joint declarations prior to November's meeting. With the latest meeting, the total number of deals rose to 62. In addition to Qatari investments in Turkey, Turkish companies are also actively operating in that Gulf nation, particularly in the construction sector ahead of the 2022 World Cup to be held in the country.