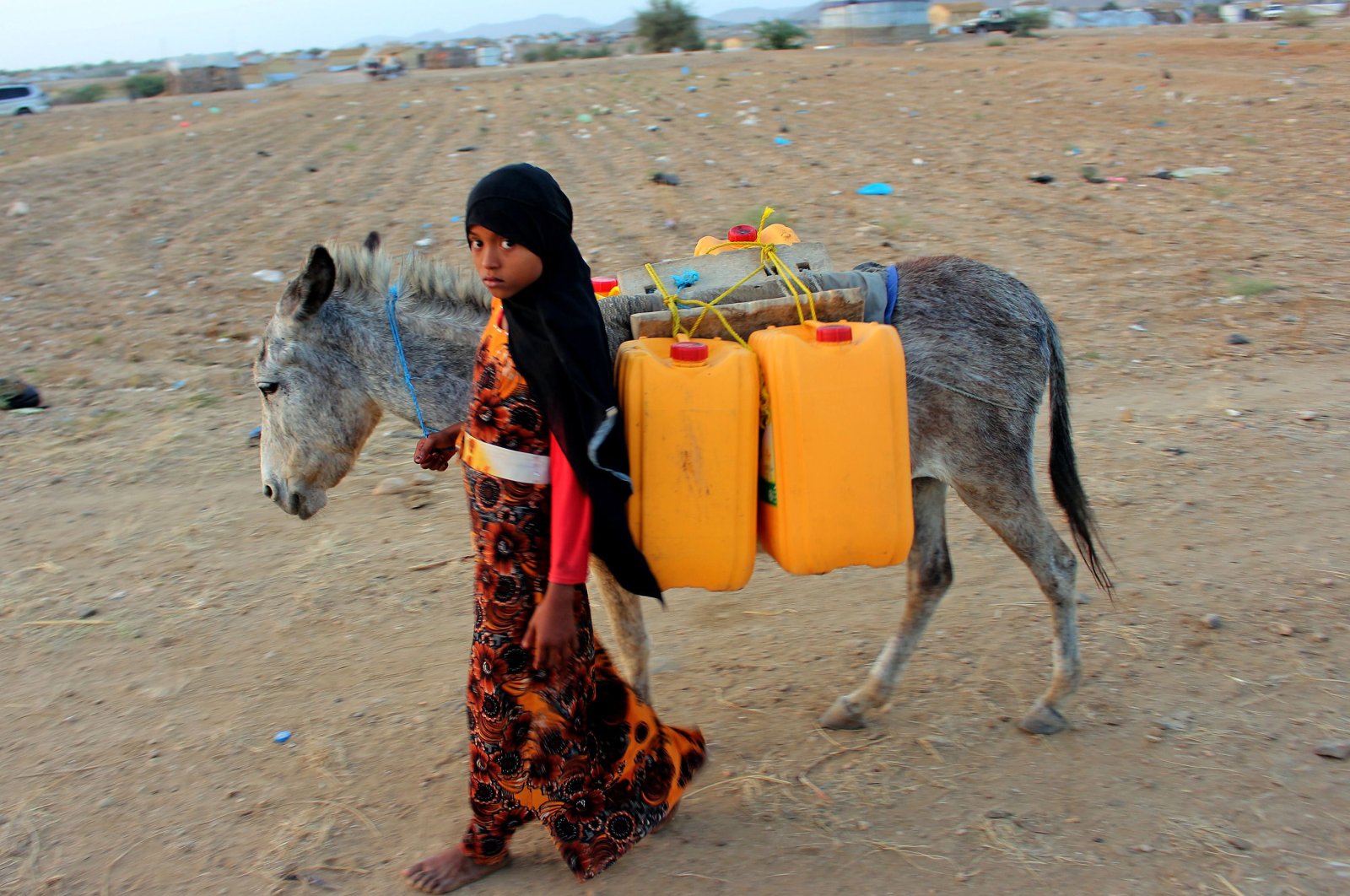 A girl walks with a donkey carrying jerrycans filled with water from a cistern at a makeshift camp for displaced Yemenis with a severe shortage of water, in the northern Hajjah province,Tuesday, March 24, 2020. (AFP Photo)
by Daily Sabah with AP Mar 25, 2020 10:47 am
RECOMMENDED

Saudi military forces have committed grave abuses against civilians in an eastern province of Yemen over the past year, including torture, forced disappearances and arbitrary detention, Human Rights Watch (HRW) said Wednesday, in the latest report of civilian abuse in the regional proxy war in Yemen.

The New York-based watchdog presented chilling testimony from former detainees in Yemen’s remote eastern province of al-Mahrah, which borders Oman and Saudi Arabia. Several Yemenis told HRW they were held and tortured at a secret detention center in the provincial capital. The report documented 16 cases of arbitrary detention and at least five cases of detainees who had been “forcibly disappeared” for months, transferred illegally to neighboring Saudi Arabia.

Michael Page, deputy Middle East director for HRW said: “Saudi forces and their Yemeni allies’ serious abuses against local al-Mahra residents is another horror to add to the list of the Saudi-led coalition’s unlawful conduct in Yemen. Saudi Arabia is severely harming its reputation with Yemenis when it carries out these abusive practices and holds no one accountable for them." He also urged the Saudi and Yemeni governments to release civilians wrongfully detained and investigate the accusations of widespread abuse, as required by international law.

Al-Mahrah – although located far from the heavy fighting in the country – has recently become a flashpoint between local residents and Saudi troops. Saudi and Saudi-backed forces have arrested scores of Yemenis who have thronged the streets in the province to protest the growing Saudi military presence in the area. The demonstrations frequently devolve into violence as troops disperse people with live bullets.

The report came on the eve of the fifth anniversary on Thursday since Saudi Crown Prince Mohammed bin Salman, the former Saudi defense minister and Saudi Arabia's allies launched Operation Decisive Storm in March 2015. Yemen has been devastated by a brutal civil war in which the Houthis, who have occupied the capital, Sanaa, and much of northern Yemen, are battling government troops, backed by a Saudi-led coalition.

In Yemen's civil war, the United Arab Emirates is part of the Saudi-led coalition battling Iranian-backed rebels known as Houthis, who have taken over most of northern Yemen. The UAE entered Yemen's war in March 2015 alongside Saudi Arabia to back Yemen's internationally recognized government, which the Houthis had pushed out of the capital, Sanaa. Saudi Arabia and the UAE, the pillars of the U.S.-backed coalition, have purchased billions of dollars’ worth of weapons from Western countries, particularly from the U.S.

The UAE has largely handled ground operations in the conflict while the Saudis have carried out airstrikes. But ties between the Yemeni government and the UAE have soured, as the UAE has been accused of also supporting separatists in Yemen.