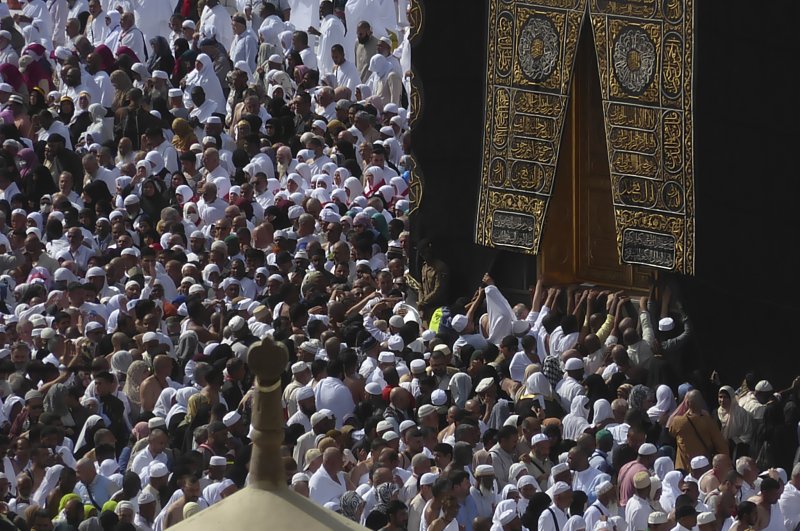 Muslim pilgrims circumambulate the Kaaba, the cubic building toward which Muslim believers turn when praying, at the Grand Mosque, during the minor pilgrimage, known as Umrah, in the Muslim holy city of Mecca, Saudi Arabia, Monday, Feb. 24, 2020. (AP Photo)
by Daily Sabah with Wires Feb 27, 2020 2:16 am
RECOMMENDED

Saudi Arabia announced early Thursday that entry for individuals aiming to perform Umrah pilgrimage or to visit the Prophet's Mosque in Madinah has been temporarily suspended over concerns of the spread of COVID-19, the novel coronavirus.

Umrah, a lesser pilgrimage compared to the annual hajj, involves a visit to Saudi Arabia where Islam's holiest site Kaaba is located.

The coronavirus outbreak has already killed more than 2,700 people, most of them in China, and spread to about 29 other countries, according to a Reuters tally. The number of confirmed cases has risen above 80,000.

The new coronavirus is believed to have originated in a market selling wildlife in the Chinese city of Wuhan late last year and has infected about 80,000 people and killed more than 2,700, the vast majority in China.

Raising the most concern on that score in the Middle East, Iran emerged as a major hotspot, with at least 19 deaths reported across the country Wednesday. The latest health ministry figures show the virus has spread to all four corners of the country. Newly hit regions include southwestern Khuzestan, Lorestan in the west, Semnan in central Iran, the southern province of Hormozgan, and Sistan and Baluchistan as well as Kohgiluyeh and Boyerahmad in the southeast. But despite the rapid spread of coronavirus, authorities have so far dismissed quarantine as an option to control the outbreak.

Several of Iran's neighbors have closed their borders and banned flights from Iran due to fears over the virus, which could hurt Iran's already fragile economy. Iraq, Bahrain, Oman, Lebanon, the United Arab Emirates and Afghanistan have all reported cases of coronavirus involving people who traveled to Iran.

Kuwait's health ministry said on Twitter on Wednesday that the number of people diagnosed with coronavirus in the country had risen to 25 after 13 more cases were confirmed. The ministry also said in a statement that the new cases were related to people traveling to Iran.

Afghanistan, Iraq and Oman also announced their first cases of the virus on Monday and connected them to travel with Iran. Bahrain confirmed three new cases on Wednesday, raising the total number of infections to 26.