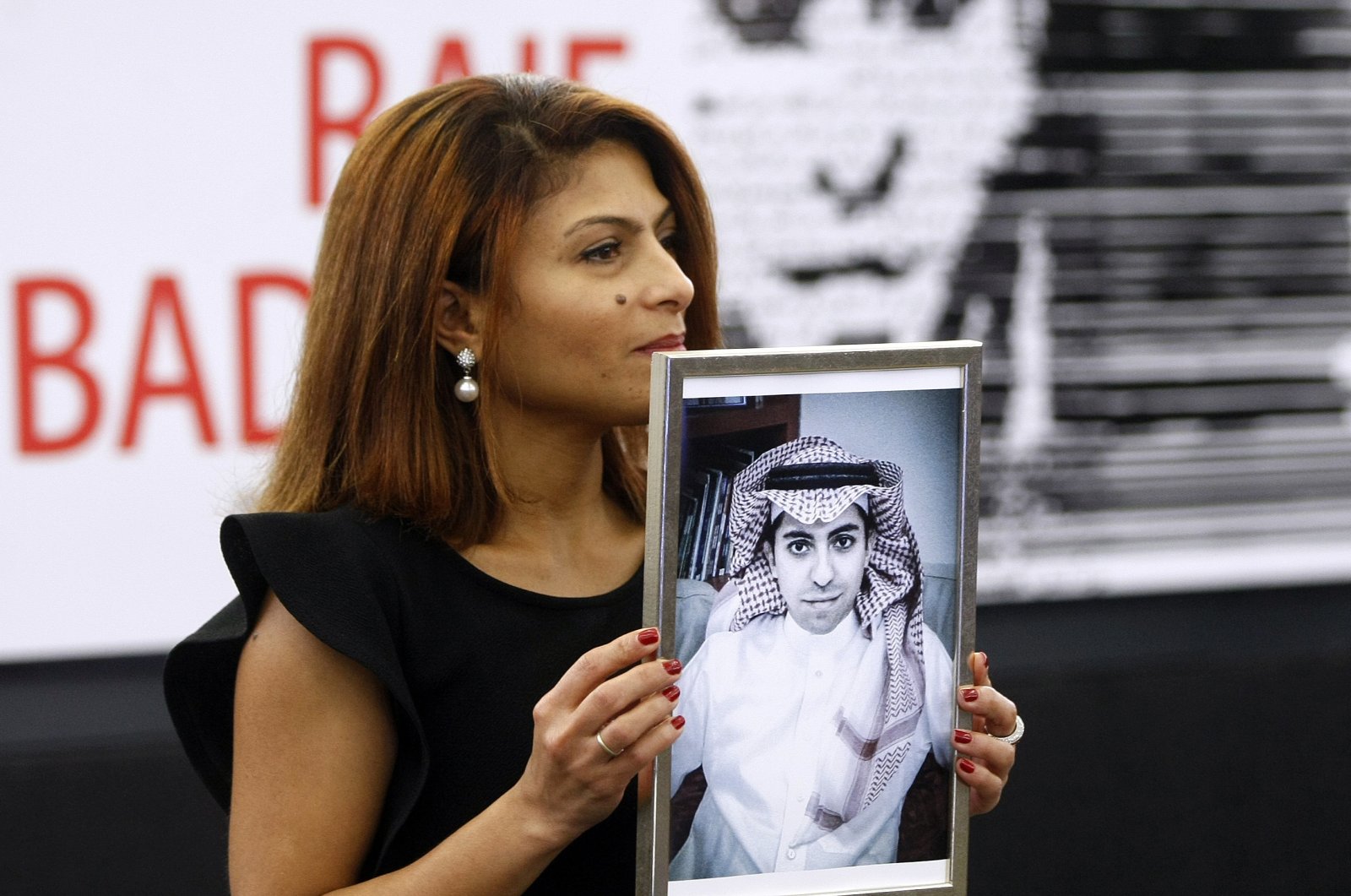 Ensaf Haidar, wife of the jailed Saudi Arabian blogger Raif Badawi, shows a portrait of her husband as he is awarded the Sakharov Prize, in Strasbourg, France, Dec. 16, 2015. (AP Photo)
by Associated Press Apr 27, 2020 6:28 pm
RECOMMENDED

Saudi Arabia's King Salman has ordered an end to the death penalty for crimes committed by minors, according to a statement Sunday by a top official.

The decision comes on the heels of another order instructing judges to end the practice of flogging, replacing it with jail time, fines or community service and bringing one of the kingdom’s most controversial forms of public punishment to a close.

King Salman's son and heir, Crown Prince Mohammed bin Salman, is seen as the force behind the kingdom’s loosening of restrictions and its pivot away from ultraconservative interpretations of Islamic law known as Wahhabism, which many in the country still closely adhere to.

The latest royal decree by King Salman could spare the death penalty for at least six men from the country’s minority Shiite community who allegedly committed crimes while under the age of 18, including Ali al-Nimr, who had participated in anti-government protests. Such activity carries terrorism-related charges in the kingdom for disturbing order and disobeying the ruler.

In a document seen by The Associated Press, the royal decree orders prosecutors to review cases and drop punishments for those who've already served the maximum 10 years.

The decree, however, states that terrorism-related cases of minors will be tried differently. It was not immediately clear whether these cases would also be spared execution or be bound by the 10-year prison limit.

Last year, Saudi Arabia executed a young man convicted of crimes that took place when he was 16 years old. Amnesty International said Abdulkareem al-Hawaj was found guilty of offences related to his participation in protests in Shiite-populated areas of Saudi Arabia.

Saudi Arabia is one of the world's biggest executioners after Iran and China, Amnesty International said in its latest annual report.

It said the kingdom had executed 184 people in 2019, including at least one person charged with a crime committed as a minor.

Amnesty International and Human Rights Watch have long called on the kingdom to abolish the use of the death penalty, particularly for crimes committed by minors.

Capital punishment for crimes committed by people under the age of 18 runs contrary to the U.N. Convention on the Rights of the Child, which Saudi Arabia has ratified.

In April 2019, the Sunni-ruled kingdom beheaded 37 men convicted of terrorism charges. The U.N. human rights chief said at the time that most of them were Shiites who may not have had fair trials and at least three were minors when sentenced.

Crown Prince Mohammed bin Salman has launched a series of social and economic reforms aimed at modernizing the conservative kingdom, which has no codified system of law to go with the texts making up sharia, or Islamic law.

The president of the Saudi government's Human Rights Commission, Awwad Alawwad, confirmed the latest decision in a statement Sunday, saying it helps the kingdom establish “a more modern penal code and demonstrates the kingdom’s commitment to following through on key reforms.”

He said “more reforms will be coming,” and that the two decisions “reflect how Saudi Arabia is forging ahead in its realization of critical human rights reforms even amid the hardship imposed by the COVID-19 pandemic."

The decree expands on a previous order by King Salman issued in late 2018, which set a maximum 10-year prison term for minors in certain cases, except for crimes punishable by death. Now the 10-year maximum applies to all crimes by minors, with the possible exception of terrorism-related crimes.

“This step, if true, needs to nullify current death sentences of all children,” Ali al-Ahmed, a Saudi rights activist in Washington, said.

Saudi Arabia's Supreme Court recently issued a directive to end flogging as a form of punishment sometime in April, according to another document seen by The Associated Press.

The public spectacle of whipping a handcuffed prisoner, often for non-violent crimes, had drawn some comparisons to the types of punishment carried out by extremist groups like Daesh. Saudi authorities had argued it was a form of deterrence against potential criminals. Rights groups criticized the practice as inhumane.

The Supreme Court document said the decision was in line with the kingdom's reforms and developments in the realm of human rights as directed by King Salman and overseen by the crown prince.

Five years ago, prominent Saudi blogger Raif Badawi was given 50 lashes before hundreds of spectators in the metropolitan city of Jiddah. It drew outrage and condemnation from around the world, including from many of Saudi Arabia's Western allies. Badawi’s feet and hands were shackled during the flogging but his face was visible.

Badawi is currently serving a 10-year prison sentence and was ordered to pay more than $266,000 in fines on charges related to his criticism of Saudi Arabia’s powerful clerics on the liberal blog he founded.

While some crimes, such as murder, may carry fixed punishments under Saudi Arabia’s interpretation of Islamic law, or Shariah, many other offenses are considered “tazir," meaning neither the crime nor the punishment is defined in Islam.

Discretionary judgments for “tazir” crimes, such as flogging, have led to arbitrary rulings with contentious outcomes. Muslim countries generally do not practice public flogging.

“This is a good step but we are still waiting to see if existing lashing sentences will be reversed and expunged,” al-Ahmed said.