Scientist’s assassination may harm Biden's options for dialogue with Iran 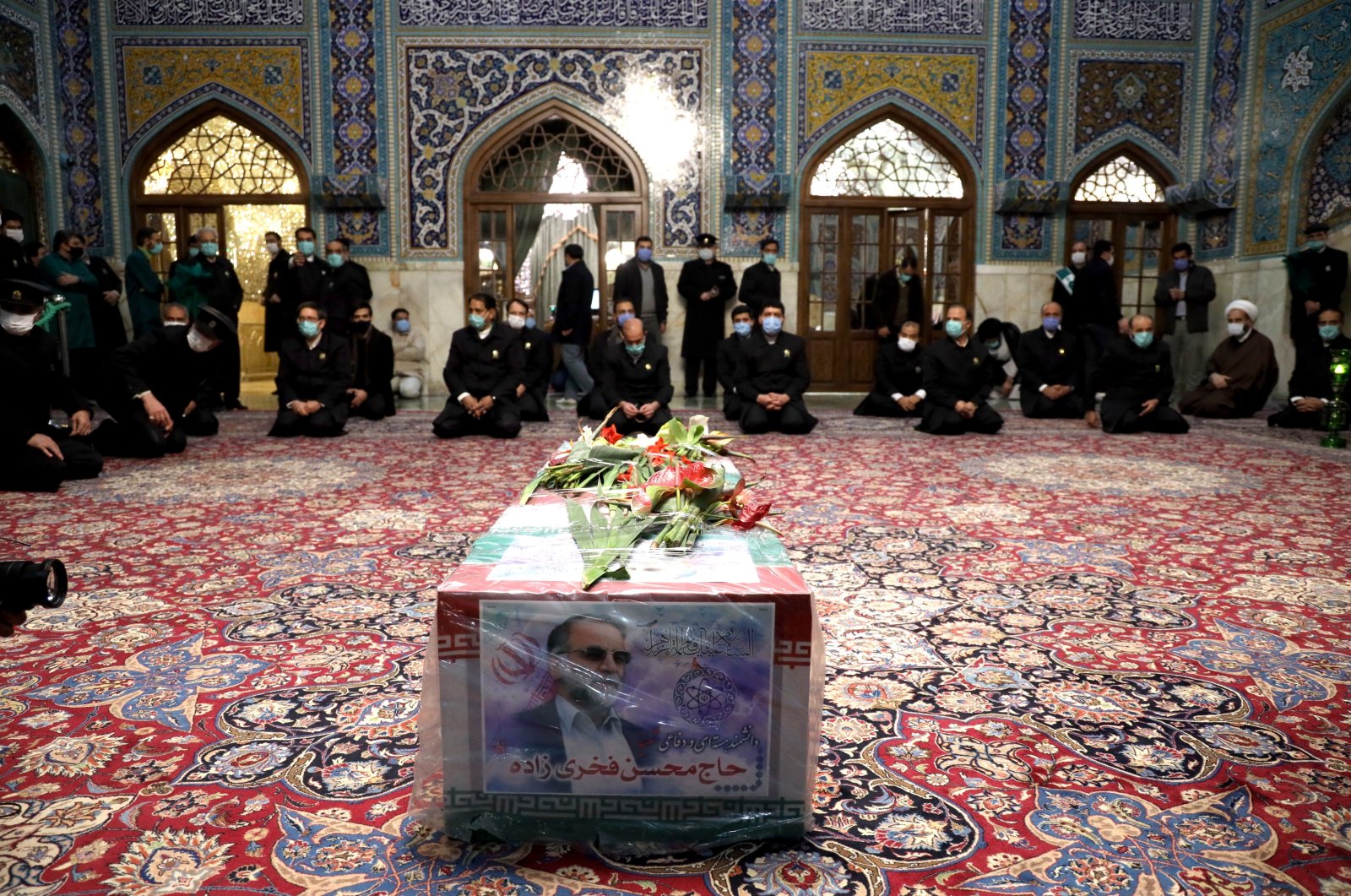 A handout picture provided by the Iranian defense ministry shows family members and officials praying over the coffin of slain Iranian nuclear scientist Mohsen Fakhrizadeh inside the Shrine of Imam Reza, during a funeral ceremony in the city of Mashhad, northeastern Iran, Nov. 29, 2020. (EPA Photo)
by Agencies
Nov 29, 2020 2:25 pm

A top Iranian nuclear scientist's assassination, which Tehran has blamed on Israel, risks not only rising tensions across the region but also severely complicates U.S. President-elect Joe Biden's plans to resume dialogue with the Middle Eastern country, analysts said Saturday.

Iran has accused archenemy Israel of seeking to sow "chaos" by killing 59-year-old Mohsen Fakhrizadeh and has strongly implied that the Jewish state was acting with the blessing of the U.S.

Washington has not officially commented on the operation, in which gunmen targeted Fakhrizadeh's car on a road outside Tehran, according to Iran's Defense Ministry.

But U.S. President Donald Trump has retweeted others' comments on the incident, including at least one that said the scientist had been "wanted for many years by Mossad," the Israeli intelligence agency.

Trump in 2018 withdrew the U.S. from the multination nuclear agreement with Iran, instead, launching a "maximum pressure" campaign, which he appears determined to pursue until he leaves office in January.

"This administration ... is here until Jan. 20" and will "continue to pursue its policies," a senior U.S. official traveling with Pompeo said during a stop Sunday in Abu Dhabi.

"I would hope that this leverage that the administration works so hard to get will be used to good purpose to get the Iranians to, once again, start behaving like a normal state."

But for some American analysts, the killing of Fakhrizadeh was a dangerous act that undercuts Biden's stated intention of offering Iran "a credible path back to diplomacy" as a step toward the U.S. rejoining the nuclear accord.

Brennan, who led the U.S. intelligence agency from 2013-2017, when Barack Obama was president and Biden was vice president, exhorted Iran to "wait for the return of responsible American leadership on the global stage & to resist the urge to respond against perceived culprits."

As the U.S. was moving a carrier group led by the USS Nimitz back to the Gulf – while insisting this had nothing to do with the assassination – Germany warned Saturday against any new "escalation."

"We call on all parties to avoid taking any action which could lead to a new escalation of the situation" which "we absolutely do not need at this moment," a German foreign ministry spokesperson told Agence France-Presse (AFP).

"Weeks before a new government takes office in the United States, existing dialogue with Iran must be maintained in order to resolve through negotiation the conflict over Iran's nuclear program."

That view was shared by Ben Friedman, a defense specialist at George Washington University.

The killing, he said, was "an act of sabotage against U.S. diplomacy and interests" and would "likely help Iranian hardliners who want nuclear weapons."

For Ben Rhodes, a former adviser to Obama, "This is an outrageous action aimed at undermining diplomacy between an incoming U.S. administration and Iran."

"It's time for this ceaseless escalation to stop," he added.

Some analysts, however, saw the killing in Iran as providing leverage to the incoming U.S. administration that could be useful in possible negotiations with Tehran.

"Plenty of time for U.S. and Israel to inflict severe damage on the regime in Iran – and build leverage for the Biden administration."

Meanwhile, Turkey has condemned the killing of Fakhrizadeh.

"We regret that the Iranian scientist Mohsen Fakhrizadeh lost his life as a result of an armed attack in Tehran. We condemn this heinous murder and extend our condolences to the government of Iran and the family of the deceased," said the Foreign Ministry.

Turkey opposes all kinds of attempts to "disrupt peace and tranquility" in the region and terrorism, regardless of the perpetrators or target, it said. "In this regard, we hope that those who committed the action will be unveiled and held accountable before justice, and we invite all parties to act with common sense and restraint, and to avoid attempts that will lead to an escalation in the region."

Fakhrizadeh, who headed research and innovation at the defense ministry, was attacked Friday in Damavand county near Tehran. Assailants reportedly bombed a vehicle ahead of Fakhrizadeh and fired at his vehicle, wounding him and others with him.

The wounded were rushed to a hospital where Fakhrizadeh died from his injuries.

Iran's President Hassan Rouhani joined top officials Saturday in accusing Israel of killing the top nuclear scientist. It is an attack that is fanning the flames of tension in the region.

The attack drew anger and outrage across Iran. A large group of protesters gathered outside Rouhani's office late Friday in Tehran and demanded strong retaliation.

It is the second high-profile assassination of an Iranian since January when a U.S. airstrike killed Gen. Qassem Soleimani in Baghdad.