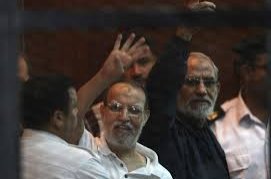 A senior leader of the Muslim Brotherhood group, Essam el-Erian, died in jail at the age of 66 on Thursday due to a heart attack, according to local reports.

El-Erian, the vice-chairman of the group's political wing, the Freedom and Justice Party, was arrested by Egyptian forces in 2013. An Egyptian court issued their final verdicts in September 2019 against el-Erian and other top officials from the Muslim Brotherhood.

Egypt has witnessed an unprecedented crackdown on dissent under the rule of President Abdel Fattah el-Sissi since the ouster of Mohammed Morsi, the country's first democratically elected president. Morsi was elected president in 2012 but was ousted in a military coup a year later.

The military crushed the Muslim Brotherhood movement in a major crackdown, arresting Morsi and many of the group's other leaders, who have been in prison undergoing multiple trials ever since the coup. Egyptian authorities have killed hundreds of Muslim Brotherhood supporters and sent thousands to prison for inciting violence. Activists consider the repression the worst in Egypt's modern history.

Morsi's death while in custody in 2019 drew severe backlash from the international community as it was widely speculated that his death was the result of mistreatment rather than natural causes.