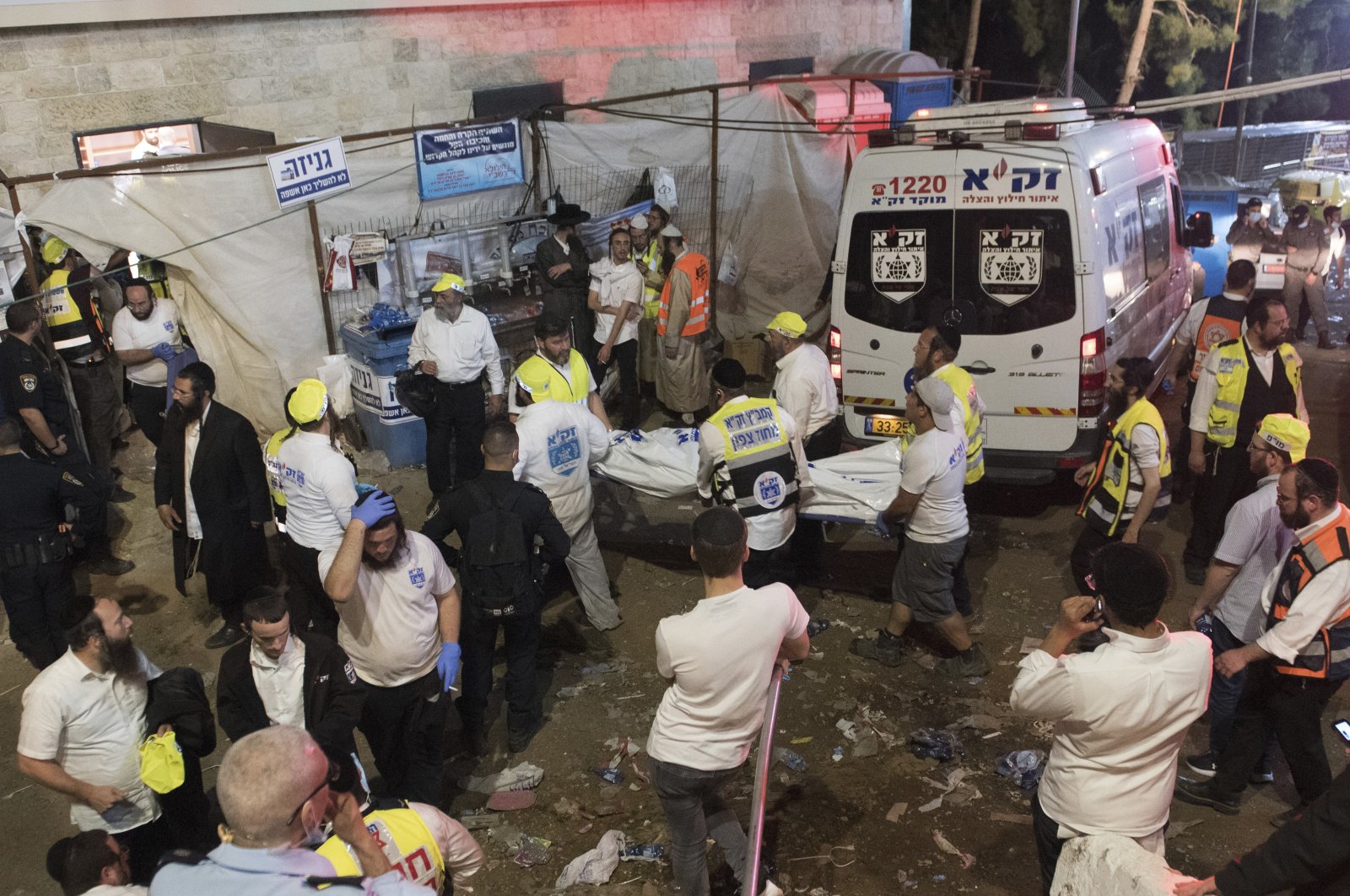 Israeli security officials and rescuers carry a body of a victim who died during a Lag BaOmer celebrations at Mount Meron in northern Israel, Friday, April 30, 2021. (AP Photo)
by Agencies
Apr 30, 2021 9:08 am

At least 44 people were killed and some 150 others were injured Friday in a stampede at a religious festival attended by tens of thousands of ultra-Orthodox Jews in northern Israel. It was one of the country's deadliest civilian disasters.

The stampede began when large numbers of people trying to exit the site thronged a narrow tunnel-like passage, according to witnesses and video footage. People began falling on top of each other near the end of the walkway, as they descended slippery metal stairs, witnesses said.

“Masses of people were pushed into the same corner and a vortex was created,” a man identified only by his first name Dvir, told Israel Army Radio. He described a terrifying sight as the first row of people fell down. He said he was in the next row of people that tripped.

Video footage showed large numbers of people, most of them black-clad ultra-Orthodox men, squeezed in the tunnel. The Haaretz daily quoted witnesses as saying police barricades had prevented people from exiting quickly.

The stampede occurred during the celebrations of Lag BaOmer at Mount Meron, the first mass religious gathering to be held legally since Israel lifted nearly all restrictions related to the coronavirus pandemic. The country has seen cases plummet since launching one of the world’s most successful vaccination campaigns late last year.

Lag BaOmer draws tens of thousands of people, mostly ultra-Orthodox Jews, each year to honor Rabbi Shimon Bar Yochai, a second-century sage and mystic who is buried there. Large crowds traditionally light bonfires, pray and dance as part of the celebrations. This year, the media estimated the crowd at about 100,000 people.

Prime Minister Benjamin Netanyahu, who was helicoptered into the scene, tweeted that the "Mount Meron disaster" was "one of the worst to befall the State of Israel" since its foundation seven decades ago.

"A day of national mourning has been declared on Sunday, let us all stand in solidarity with the families of the victims, and pray for the safety of the injured," Netanyahu said upon arriving at Mount Meron near the northern town of Safed where the incident occurred.

After the stampede, photos showed rows of wrapped bodies lying on the ground, with dozens of ambulances at the site.

Eli Beer, director of the Hatzalah rescue service, said he was horrified by how crowded the event was, saying the site was equipped to handle perhaps a quarter of the number who were there. “Close to 40 people died as a result of this tragedy,” he told the Army radio station.

By Friday morning, Zaka, another ambulance service, said the death toll had risen to 44. Spokesperson Motti Bukchin said families were being notified and the bodies were being taken to a single location for identification. He said he expected the bodies to be buried before sundown of the Jewish Sabbath when funerals do not take place.

The death toll was on par with the number of people killed in a 2010 forest fire, which is believed to be the deadliest civilian tragedy in the country’s history.

Zaki Heller, a spokesperson for the Magen David Adom rescue service, said 150 people had been hospitalized, with six in critical condition.

Heller told the station “no one had ever dreamed” something like this could happen. “In one moment, we went from a happy event to an immense tragedy,” he said.

The Israeli military said it had dispatched medics and search and rescue teams along with helicopters to assist.

Health authorities had warned against holding such a large gathering.

But when the celebrations started, the Public Security Minister Amir Ohana, police chief Yaakov Shabtai and other top officials visited the event and met with police, who had deployed 5,000 extra forces to maintain order.

Before the stampede, Ohana, a close ally of Netanyahu, thanked the police for their hard work and dedication “for protecting the well-being and security for the many participants” as he wished the country a happy holiday.

Netanyahu is struggling to form a governing coalition ahead of a Tuesday deadline, and the national tragedy is sure to complicate those efforts.

"Devastating scenes... in Israel. My thoughts are with the Israeli people and those who have lost loved ones in this tragedy," British Prime Minister Boris Johnson tweeted.

In a statement, France sought to assure "the Israeli people of its deep solidarity in this ordeal".

German Chancellor Angela Merkel extended her "heartfelt sympathy" to Israel. "In the name of the chancellor and the entire government, I would like to express our heartfelt sympathy to the Israeli people for the catastrophe in Meron and its horrific consequences," her spokesman Steffen Seibert told reporters.

"We wish you strength and courage to get through these difficult times," tweeted European Council President Charles Michel.

Israel has fully vaccinated more than half of its 9.3 million population against the coronavirus, but restrictions on massive public gatherings remain in place to stem the spread of the virus.

Ultra-Orthodox Jews, known in Israel as Haredim, have throughout the pandemic shown resistance towards health and safety measures mandated by the government.