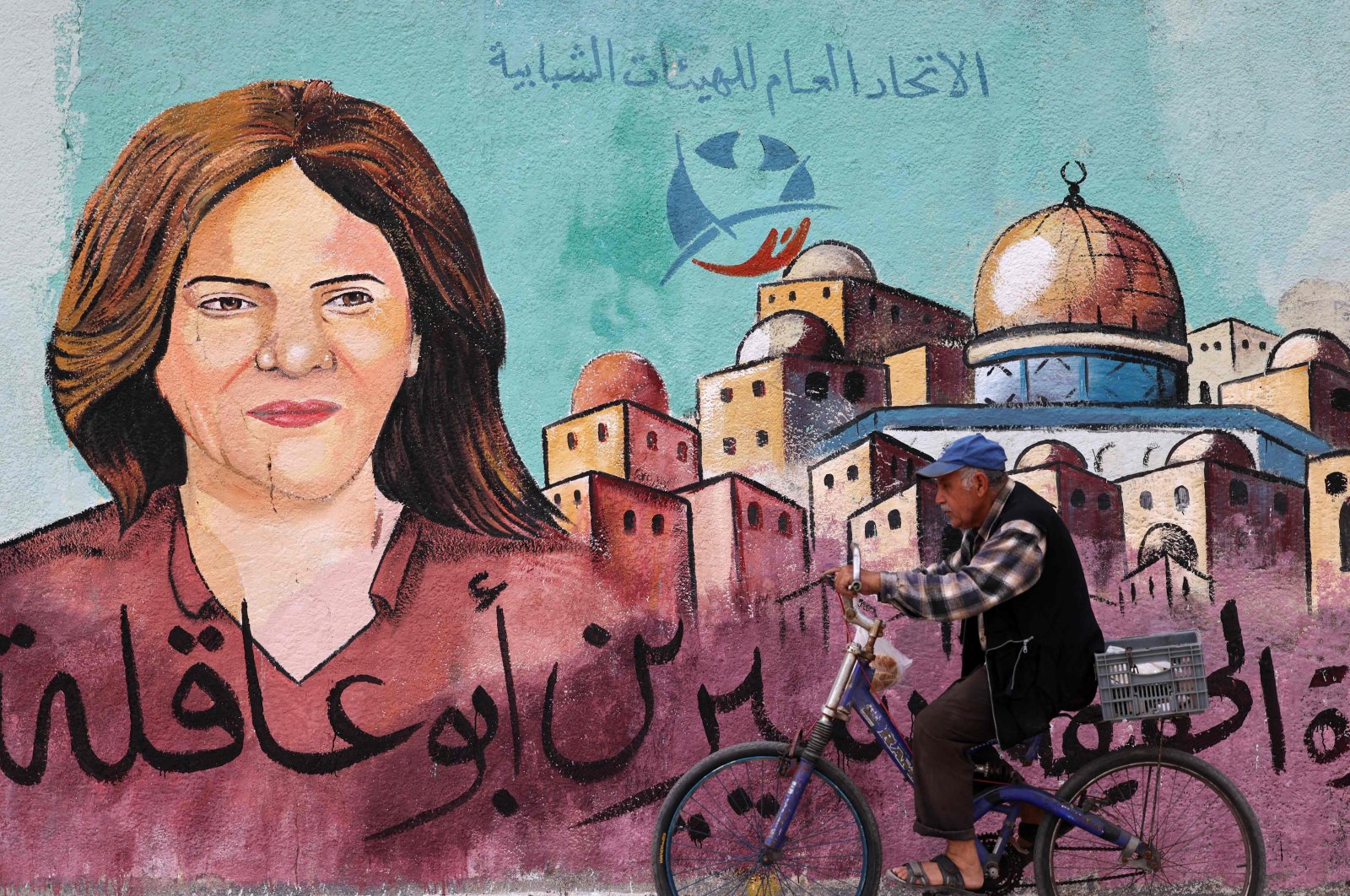 A Palestinian man rides his bicycle in front of a mural painted by an artist in honour of slain veteran Al-Jazeera journalist Shireen Abu Akleh, Gaza City, May 13, 2022. (AFP Photo)
by Agencies May 13, 2022 1:50 pm
RECOMMENDED

Israeli forces are on heightened alert in the occupied Jerusalem and West Bank, according to media reports on Friday, ahead of the funeral of veteran Al-Jazeera journalist Shireen Abu Akleh, two days after she was killed by Israel.

The well-known Palestinian reporter for the broadcaster's Arabic language channel, Abu Akleh was among the reporters who rushed to the northern city of Jenin in the occupied West Bank to cover an Israeli raid before she was shot dead by Israeli forces on Wednesday, according to the Palestinian Health Ministry.

The body of Abu Akleh, a Palestinian Christian born in the occupied East Jerusalem, was transferred to the holy city from the occupied West Bank.

The funeral procession would begin at a hospital in east Jerusalem, and last respects would be paid at a church in the Old City, Al Jazeera said, with her body set to be buried alongside her parents in a nearby cemetery.

Roads would be closed for the procession, the spokeswoman said, with extra forces deployed to "ensure the funeral takes place safely and without violence that could endanger participants or others."

In a sign of Abu Akleh's prominence, she was given what was described as a full state memorial on Thursday at Palestinian president Mahmud Abbas's compound in Ramallah.

Thousands lined the route as her coffin, draped in the Palestinian flag, was driven through the West Bank city, where a street is to be renamed in her honor. Many held flowers, wreaths and pictures of the journalist, who has been widely hailed for her bravery and professionalism.

"Her voice entered every home, and her loss is a wound in our hearts," said mourner Hadil Hamdan.

Speaking to AFP, Abu Akleh's brother Antoun Abu Akleh said that she "was the sister of all Palestinians."

Israel has also issued a public call for a joint probe, stressing the need for Palestinian authorities to hand over the fatal bullet for forensic examination. But Abbas said the proposal had been rejected.

"This crime should not go unpunished," he said during the Ramallah memorial, adding the Palestinian Authority held Israel "completely responsible" for her death.

Fresh violence erupted Friday in the northern West Bank during an Israeli raid on the Jenin camp. The Palestinian Health Ministry said 13 Palestinians were wounded in the clashes, one of them in serious condition.

The injured were brought to the Ibn Sina Hospital, the Jenin-based facility said in a statement confirming the casualties.

Armed clashes are currently taking place inside the Jenin camp where the army has besieged a house in the Al-Hadaf area and is using loudspeakers to urge two young men to surrender, eyewitnesses told Anadolu Agency (AA).

For its part, the official Voice of Palestine Radio said that the Israeli army injured a Palestinian man northeast of al-Bireh city, without giving further details.

The Israeli army has said it carried out a "preemptive and preventive" operation in the West Bank.