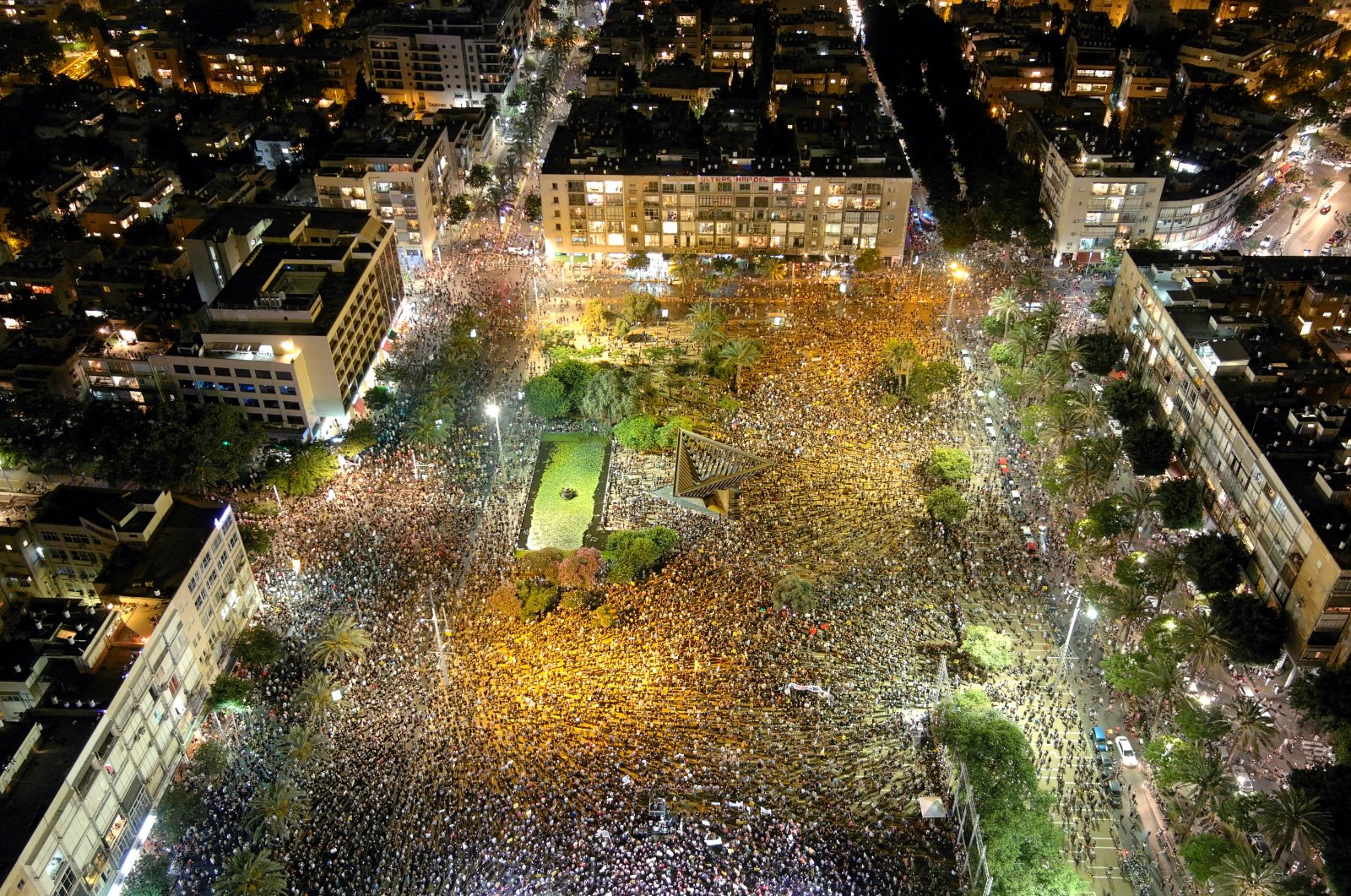 A general view shows Rabin Square as Israelis protest against the government's response to the financial fallout of the coronavirus crisis in Tel Aviv, Israel, July 11, 2020. (Reuters Photo)
by Compiled from Wire Services
Jul 12, 2020 12:05 pm

Thousands of Israelis took to the streets of Tel Aviv against Prime Minister Benjamin Netanyahu's economic policy in light of the coronavirus crisis, media outlets reported on Sunday.

More than 10,000 people gathered in central Rabin Square on Saturday evening to draw attention to the financial difficulties brought about by the coronavirus crisis, especially self-employed Israelis. They accuse the government of not taking care of citizens' needs.

Twelve demonstrators were arrested, a police spokesman said Sunday. Some protesters reportedly clashed with police after they tried to block central streets in Tel Aviv. Three officers were slightly injured after demonstrators used pepper spray on them.

Netanyahu on Thursday presented his aid package to help people through the coronavirus crisis. The program is intended to provide a safety net for the employed, self-employed and businesses through next June, he said.

Coronavirus restrictions put in place earlier this year took a heavy toll on the Israeli economy, with the unemployment rate most recently registered at more than 20%.

The country's daily infection rate has been rising again, prompting new restrictions to be imposed and further increasing criticism of Netanyahu over his crisis management abilities.

On Thursday, Netanyahu announced an economic “safety net” promising quick relief to the self-employed and stipends over the coming year for struggling workers and business owners.

The government is expected to approve the plan on Sunday.

But the large turnout at Rabin Square was a sign of widespread discontent with the government’s policies.

Despite successfully keeping the outbreak under control in the spring, Israel’s new government, which took office in May, has been accused by some of reopening the economy too quickly. That has caused a new spike in infections that is expected to put more people out of work as a result of renewed closures.

Authorities now report record levels of more than 1,000 new cases a day, higher than any peak in the spring.

The death toll is nearing 340.

After three inconclusive elections in under a year, Netanyahu and his main rival, retired military chief Benny Gantz, agreed in May to form an “emergency” government with a mandate to tackle the coronavirus crisis.

In a statement, Gantz, who serves as defense minister and “alternate” prime minister, acknowledged the pandemic has brought “the largest health, economic and social crisis” in Israel’s history. “We understand the public outcry, and we will do everything we can to be responsive to it,” he said.

In the face of an angry electorate, Netanyahu’s support has tumbled. A recent Midgam Research & Consulting poll on Channel 12 TV found just 46% of respondents approved of Netanyahu’s job performance, down from 74% in May.