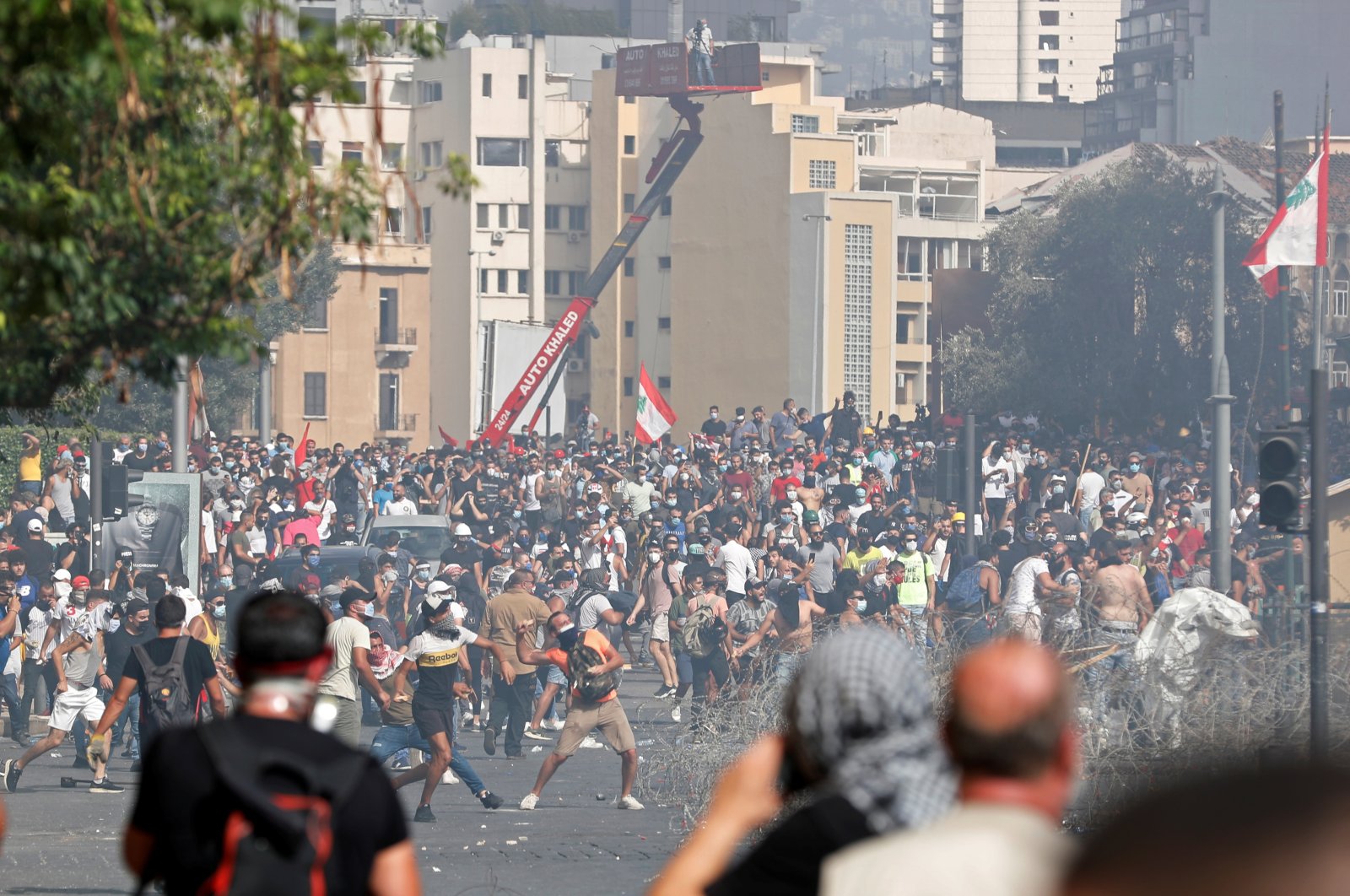 Demonstrators throw stones during a protest as they try to break through a barrier to get to the parliament building following Tuesday's blast, in Beirut, Lebanon August 8, 2020. (REUTERS Photo)
by Agencies Aug 08, 2020 6:30 pm
RECOMMENDED

Police fired tear gas and clashed with demonstrators in Lebanon's capital on Saturday at the start of a planned protest over this week's massive explosion that devastated large parts of Beirut and killed more than 150 people.

Thousands of people poured into Beirut’s main square, where they set up symbolic nooses to hang politicians whose corruption and negligence they blame for Tuesday's explosion at the Port of Beirut.

The huge blast was caused by thousands of tons of ammonium nitrate improperly stored at the port for more than six years, apparently set off by a fire. It was the biggest in Lebanon’s history and caused an estimated $10 billion-$15 billion worth of damage, according to Beirut’s governor. It also left hundreds of thousands of people homeless.

The protest Saturday was the first significant demonstration since the explosion and organizers planned to hold a symbolic funeral for the dead. As the protest got underway, however, small groups of young men began throwing stones at security forces.

Dozens of protesters entered the premises of the Lebanese foreign ministry chanting slogans against the government and political establishment, footage shared on social media confirms. Retired army officer Sami Ramah read a statement on the building's steps after dozens of protesters pushed their way into the building.

"This authority must step down,” he said.

Protesters raised flags with the image of a fist that has come to symbolize nationwide anti-government protests and burned a portrait of President Michel Aoun.

Demonstrators also stormed the headquarters of the Lebanese association of banks and the Energy Ministry building.

Footage broadcast live by Lebanese TV channels showed protesters taking over the energy ministry building as powerless police officers looked on, with one of the demonstrators saying: "They ruled Lebanon for 30 years, now Lebanon is ours."

"We entered the energy ministry and we are here to stay. They will be surprised by our actions," he said, referring to the ruling political class protesters want to remove.

According to officials one policeman died during the clashes.

"A member of the Internal Security Forces died while ... helping people trapped inside the Le Gray hotel," the police force said on Twitter.

It "came after he was assaulted by a number of murderous rioters, which led him to fall and die," the statement added, without providing additional details.

Earlier today the police in Beirut confirmed to Reuters that rubber bullets were fired in the central Martyrs' Square. Live coverage on local television stations showed several people bloodied from rubber bullets shot as police used teargas to disperse protesters trying to break into parliament square. The Lebanese Red Cross said 110 people were injured during the demonstration in central Beirut, while 32 others were taken to hospital.

The gathering at Martyrs Square and outside the parliament building and government headquarters came amid popular anger against Lebanon’s political leadership. The country’s ruling class, made up mostly of former civil war-era leaders, is blamed for widespread corruption, incompetence and mismanagement that contributed to Tuesday’s explosion.

The protest came as senior officials from the Middle East and Europe arrived in Lebanon in a show of solidarity with the tiny country that is still in shock suffered after Tuesday’s blast.

Lebanon is mired in its worst economic and financial crisis in decades making it difficult for many people who had their properties damaged to fix them.

In a show of anger, the president of the Christian opposition Kataeb party said its three legislators have decided to resign from Parliament over this week's “disaster.” Sami Gemayel called on every “honorable” member of parliament to resign and work for the “birth of a new Lebanon.”

A senior Kataeb party official was killed in the blast, which claimed at least 154 lives, wounded more than 5,000 people and laid waste to the country’s largest port and nearby areas.

Also killed were 43 Syrians, the country's embassy in Beirut said. Lebanon is home to some 1 million Syrian refugees.

The Dutch foreign ministry said Saturday that Hedwig Waltmans-Molier, the wife of the Netherlands’ ambassador to Lebanon, had also died of injuries sustained in Tuesday's blast.

Documents that surfaced after the blast showed that for years officials had been repeatedly warned that the presence of 2,750 tons of ammonium nitrate at the port posed grave danger, but no one acted to remove it. Officials have been blaming one another since the explosion and 19 people have been detained including the port’s chief, head of Lebanon’s customs department and his predecessor.

“We will support Lebanon through all available means,” Ahmed Aboul Gheit, the secretary-general of the 22-member Arab League told reporters after meeting President Michel Aoun on Saturday morning. Aboul Gheit said he would take part in a donor conference for Lebanon in France on Sunday and convey Lebanon’s demands to the international community.

Later on Saturday the president of the European Council, Charles Michel, arrived in Beirut for a brief visit. Turkey’s vice president and the country's foreign minister arrived Saturday morning and met Aoun, saying that Ankara was ready to help rebuild Beirut's port and evacuate some of the wounded from Lebanon to Turkey for treatment.

At the site of the blast in Beirut’s port, workers were still searching for dozens of people who have been missing since Tuesday. Bulldozers were also seen removing debris near the giant grain silos that are still partly standing.

International aid has been flowing to Lebanon for days and several field hospitals have been set up around Beirut to help treat the wounded.

President Donald Trump said Friday that he had spoken by telephone with Aoun and French President Emmanuel Macron, who paid a brief visit to Lebanon on Thursday. Trump did not mention the investigation but noted that medical supplies, food and water were being sent from the United States, along with emergency responders, technicians, doctors and nurses.

The ammonium nitrate, a chemical used in fertilizers and explosives, originated from a cargo ship called MV Rhosus that had been traveling from the country of Georgia to Mozambique in 2013. It made an unscheduled detour to Beirut as the Russian shipowner was struggling with debts and hoped to earn some extra cash in Lebanon. Unable to pay port fees and reportedly leaking, the ship was impounded.

In 2014, the material was moved from the ship and placed in a warehouse at the port where it stayed until the explosion.