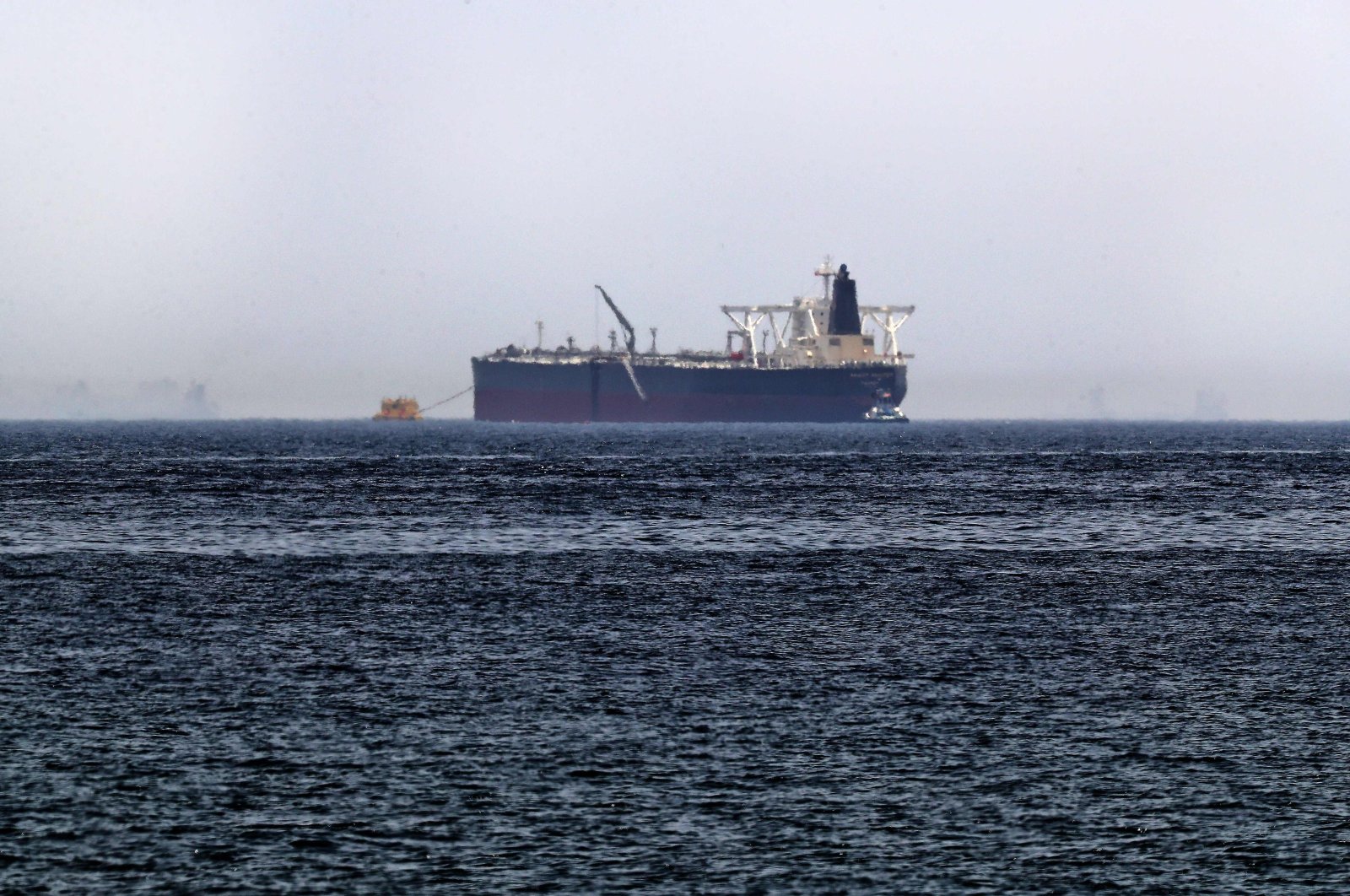 The crude oil tanker Amjad, one of two reported tankers that were damaged in mysterious "sabotage attacks," off the coast of the Gulf emirate of Fujairah, United Arab Emirates, May 13, 2019. (AFP Photo)
by Anadolu Agency Dec 24, 2020 4:13 pm
RECOMMENDED

Apart from building strategic ties with Israel, the United Arab Emirates' (UAE) attempts to control international naval trade in the Gulf and its activities in war-torn Yemen are increasingly becoming a source of concern for regional and global players.

Over the past five years, the UAE has pursued an ambitious strategic agenda in the Red Sea, building military installations and securing control of the southern coasts of Yemen along the Arabian Sea in the Bab al-Mandab strait and Socotra Island.

Analysts believe that despite reducing its military footprint in Yemen in 2019, the UAE consolidated its role in the southern regions. It has continued to finance and provide training to thousands of Yemeni fighters drafted in various groups such as the Security Belt Forces, the Shabwani and Hadrami Elite Forces, the Abu al-Abbas Brigade and the West Coast Forces. These militia groups work independently of the legal government and even challenge it.

In April 2020, the UAE-supported separatist group known as the Southern Transition Council (STC) announced its self-ruling administration in the southern governorates. The Yemeni government called it an attempt to "divide the country and threaten its stability.”

The militias controlling these areas are loyal to the UAE and opposed to the legitimate government. In addition to controlling Yemen's land and sea lines, Abu Dhabi has gained access to the Horn of Africa along with strategic maritime points in the Red Sea. It has managed to secure deals with African countries on the western shores of the Red Sea to increase its influence over the Berbera Port in Somaliland, the Assab Port in Eretria, the Port of Djibouti and the Bosasso and Mogadishu ports in Somalia.

Al-Mokha is a small port city situated directly on the Bab al-Mandab, the narrowest point between the Arabian Peninsula and Africa and the gateway to the Red Sea. It was liberated from Houthi rebels in February 2017 by UAE-backed Yemeni forces. Since then, the UAE has been the only ruling power in the area between the Hodeidah and Taiz provinces. It has trained militias on the west coast under the names Giants Brigade and Tihama Brigade, as well as fighters loyal to Tareq Saleh, the nephew of former Yemeni President Ali Abdullah Saleh, who commands the Guards of the Republic.

Speaking to Anadolu Agency (AA), Abdulhafez Alhatami, a Yemeni journalist from Hodeida, said the UAE is now increasingly backing Tariq's forces at the expense of others.

"In 2019, the UAE cut down military supplies including heavy weaponry and financial aid to Giant Brigade and Tihama Brigade to force them to team up with Guards of the Republic,” he said, noting that the UAE had summoned the commander of the Giants Brigade, Abu Zarah al-Muharrami, and forced him to give up control of the western coast to Saleh's forces.

The UAE was also behind the formation of joint militias put together with cadres from all three forces. Recent reports suggest that the UAE has appointed a new commander to this joint force that controls Yemen's western coast. Sources said this handover process took place in the coastal city of Mokha.

The new commander has been tasked to address disputes between militia leaders and build stronger ties with local people who have often protested against the UAE's presence in the area. Observers believe that Abu Dhabi's actions have further queered the pitch for Yemen's problems.

While the port and military base deals have been agreed to formally between Abu Dhabi and African states on the western shores of the Red Sea, it is unlikely that the UAE will hand these valuable ports back to Yemen.

According to the Yemen Data Project, the Saudi and UAE-led coalition has conducted more than 22,180 airstrikes on Yemen since the beginning of the war, an average of over 10 attacks per day. Moreover, Human Rights Watch (HRW) has documented at least 90 unlawful coalition airstrikes that have hit homes, markets, hospitals, schools, mosques and detention centers. Some of the attacks may amount to war crimes.

Tawfik Alhamidi, a Yemeni human rights activist, told AA that the UAE forces on the western coast have practiced illegal actions such as closing the port of Mokha, displacing residents of Dhubab and building military bases on Perim Island.

"They have established secret prisons, banned fishing and allowed smuggling activities. All these actions undoubtedly will tear Yemen apart and create an unstable political and security situation,” he said.

In 2019, CNN traced U.S.-made weapons sold to the UAE that had found their way to militias in Yemen. The arms included over half a dozen mine-resistant ambush-protected (MRAP) all-terrain vehicles manufactured in Texas. They had been transferred to the Giants Brigade, a militia allied with the UAE.

The legitimate government's opposition has hardly deterred the UAE, given its strong influence on many armed groups.

"The legitimate government is powerless. It did not protect the sovereignty of Yemen, let alone bombing its army and carving out islands and cities by UAE,” said Alhamidi.

On the larger front, observers believe the UAE's attempts to control international naval trade lanes by undermining the interests of regional and international forces might lay the groundwork for a trickier situation along the Red Sea.