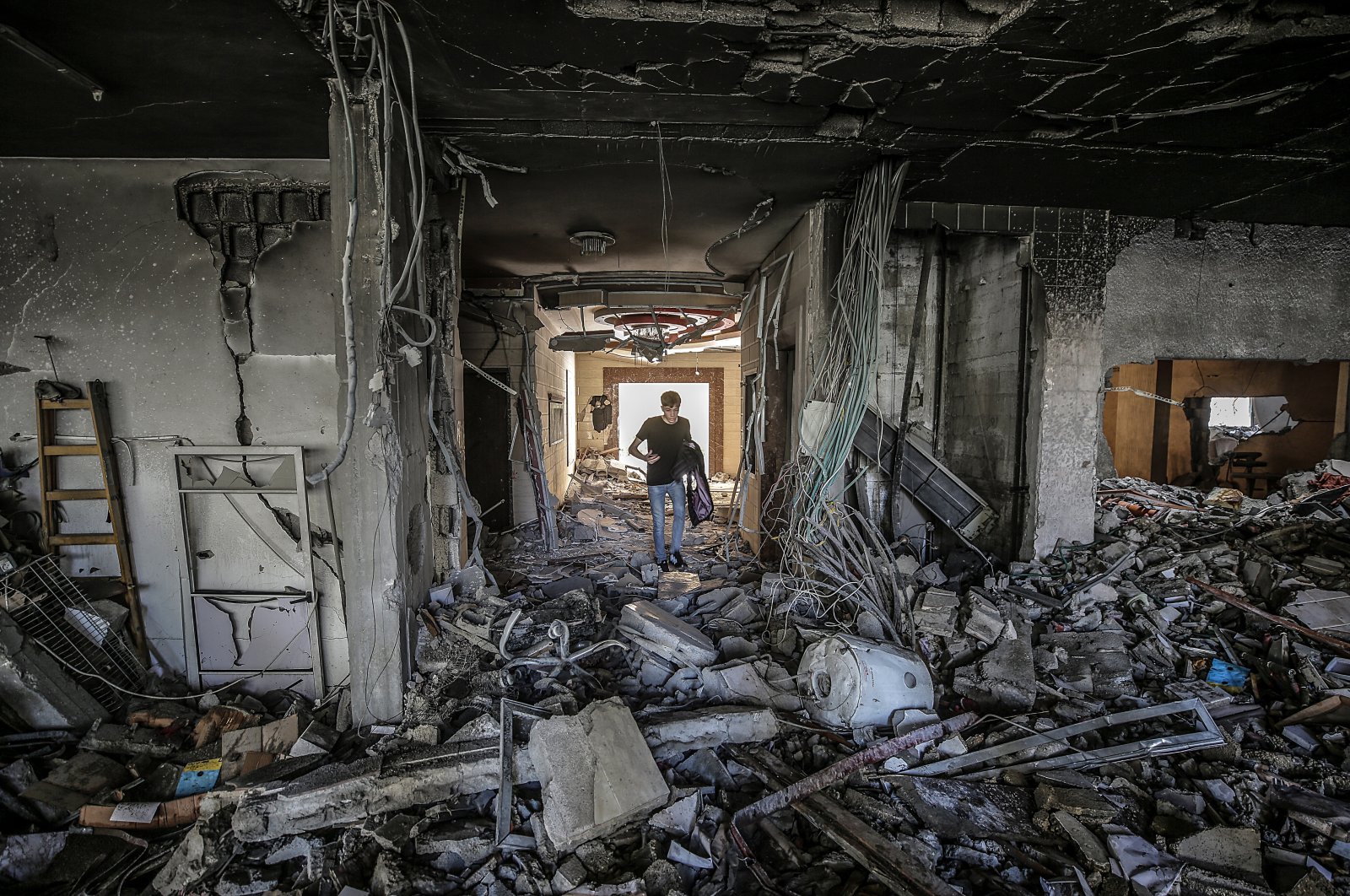 A Palestinian inspects his destroyed house after Israeli airstrikes in Gaza Strip, Palestine, May 20, 2021. (EPA Photo)
by DAILY SABAH May 20, 2021 5:36 pm
RECOMMENDED

U.N. Secretary-General Antonio Guterres said Thursday he was "deeply shocked" by the continued air and artillery bombardment by Israeli Defense Forces (IDF) in Gaza Strip and called for an immediate cease-fire in the Palestinian enclave.

"I am deeply shocked by the continued air and artillery bombardment by the Israeli Defence Forces in Gaza," Guterres said during United Nations General Assembly's special session on attacks in Palestine, urging cease-fire between Israel and Palestinian resistance group Hamas.

"If there is hell on earth, it is the lives of children in Gaza," the official said, noting that he and the U.N. Mideast envoy are engaged in “extensive diplomatic efforts” in the region, including with Egypt, Jordan and Qatar, to stop the conflict. Guterres called on all members of the international community “to do everything in their power to enable the parties to step back from the brink.”

The U.N. chief also called on Israel and Hamas “to allow for mediation efforts to intensify in order to bring the fighting to an end” and urged Israeli authorities to abide by the laws, “including the proportionate use of force” and called on them “to exercise maximum restraint in the conduct of military operations.”

Al least 232 Palestinians, including 65 children, 39 women have died since May 10, according to the Gaza Health Ministry. Since the fighting began, Gaza’s infrastructure, already weakened by a 14-year blockade, has rapidly deteriorated. The U.N. said Thursday, at least 75,000 Palestinians were displaced due to Israeli attacks on Gaza. As recently as Tuesday the U.N. had reported the number as 52,000.

Palestinian foreign minister Riyad al-Maliki told U.N. General Assembly that Israel "is targeting families as they sleep to sow the seeds of terror among our people." He emphasized that while Palestinians are "working for peace," it "cannot come at the expense of our people, and its rights."

Al-Maliki rejected statements by Western leaders, arguing that Israel has the right to defend itself. He said Tel Aviv is "occupying our land" and "persecuting" Palestinians.

Sheikh Mohammed said continuing Israeli settlement activity in Palestine has taken on a scale that can be described as "ethnic cleansing of Palestinian people." He called Israeli attacks on residential areas, media, medical facilities in Gaza "flagrant violation of international law."

Meanwhile, Çavuşoğlu ensured that Turkey will not remain silent in face of "unspeakable atrocities and brutality" in Palestine.

"A tragedy has been taking place in Palestine for many years. A heart-breaking tragedy is continuing before our eyes," Çavuşoğlu said. "Through repetition, the perpetrators of this tragedy want us to become insensitive to these outrageous crimes, the oppression of the Palestinian people, and violations of their basic human rights and freedoms," he added. Çavuşoğlu asserted that acts of Israeli aggression "amount to war crimes."

"It is unfortunate and disturbing that the U.N. Security Council once again failed to deliver," he said. "At a time when the world needed it most to protect international peace and security, the position of the Council has once again been that of inaction and dysfunction."