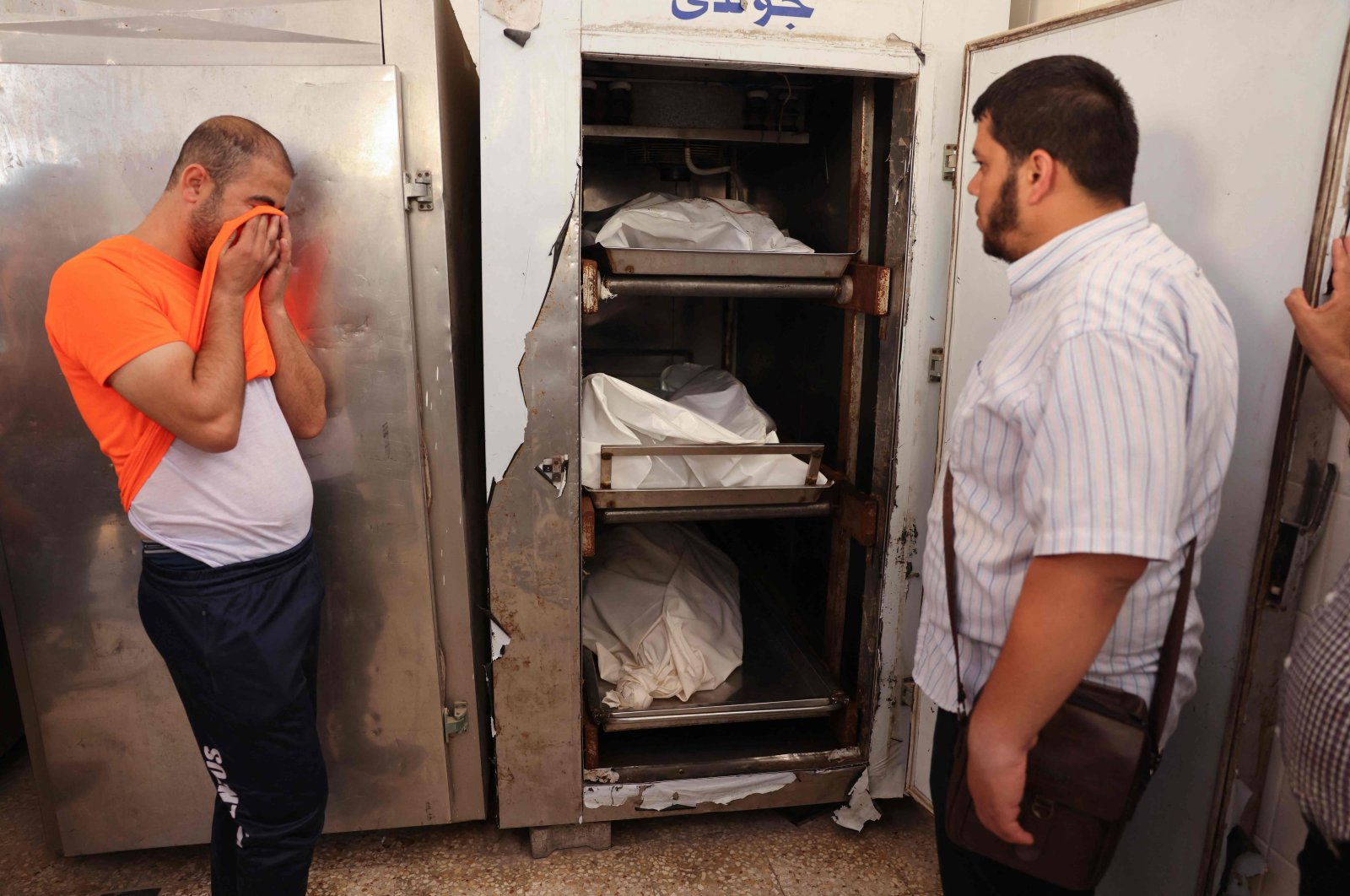 A brother weeps in front of the corpses at the morgue, where Iyad, a 33-year-old wheelchair-bound Palestinian man killed in his house along with his pregnant wife and their 3-year-old daughter during an Israeli airstrike, were trasported, Deir el-Balah, Gaza Strip, Palestine. (AFP Photo)
by Agencies
May 20, 2021 10:34 am

Israel unleashed a wave of airstrikes across the Gaza Strip early Thursday, killing at least one Palestinian and wounding several others.

The latest strikes came after Israeli Prime Minister Benjamin Netanyahu pushed back against U.S. pressure to wind down the offensive against Gaza's resistance group Hamas.

Explosions shook Gaza City and orange flares lit up the night sky, with airstrikes also reported in the central town of Deir al-Balah and the southern town of Khan Younis. As the sun rose, residents surveyed the rubble of at least five family homes destroyed in Khan Younis. There were also heavy airstrikes on al-Saftawi Street, a commercial thoroughfare in Gaza City.

An Israeli airstrike smashed into the Khawaldi family’s two-story house in Khan Younis, destroying it. The 11 residents, who were sleeping in a separate area out of fear, were all wounded and hospitalized, said Shaker al-Khozondar, a neighbor. Shrapnel hit his family home next door, killing Hoda al-Khozondar, his aunt, and wounding her daughter and two cousins, he said.

Weam Fares, a spokesperson for a nearby hospital, confirmed the aunt's death and said at least 10 people were wounded in strikes overnight.

Netanyahu has pushed back against calls from the Biden administration to wrap up the operation that has left hundreds dead. It marks the first public rift between the two close allies since the fighting began last week and could complicate international efforts to reach a cease-fire. His pushback also poses a difficult early test of the U.S.-Israel relationship.

After visiting military headquarters, Netanyahu said Wednesday he appreciated "the support of the American president,” but that Israel would push ahead to return "calm and security” to its citizens. He said he was "determined to continue this operation until its aim is met.”

U.S. President Joe Biden had earlier told Netanyahu that he expected "a significant de-escalation today on the path to a cease-fire,” the White House said. Biden had previously avoided pressing Israel more directly and publicly for a cease-fire with Gaza’s Hamas. But pressure has been building for Biden to intervene more forcefully as other diplomatic efforts gather strength.

Egyptian negotiators have also been working to halt the fighting, and an Egyptian diplomat said top officials were waiting for Israel’s response to a cease-fire offer. The diplomat spoke on condition of anonymity in line with regulations.

Moussa Abu Marzouk, a top Hamas official, told Lebanese Mayadeen TV that he expected a cease-fire in a day or two. Israeli security officials said they do not expect a cease-fire before Friday, an Israeli news outlet Channel 12 TV reported Thursday.

German Foreign Minister Heiko Maas was expected in the region Thursday for talks with Israelis and Palestinians. Israel’s Foreign Ministry said the foreign ministers of Slovakia and the Czech Republic would join him after being invited "to express their solidarity and support” for Israel.

The current round of fighting in Gaza was preceded by days of tension and Israeli aggression in occupied East Jerusalem, where hundreds of Palestinians were assaulted by Israeli forces at Al-Aqsa Mosque, a flashpoint site sacred to Muslims, and in the Sheikh Jarrah neighborhood. Heavy-handed police tactics at the compound and the threatened eviction of dozens of Palestinian families by Jewish settlers had inflamed tensions.

Since then, Israel has launched hundreds of airstrikes that it says have targeted Hamas’ infrastructure. Hamas and other groups embedded in residential areas have fired over 4,000 rockets at Israeli cities.

At least 230 Palestinians have been killed, including 65 children and 39 women, with 1,710 people wounded, according to the Gaza Health Ministry. Since the fighting began, Gaza’s infrastructure, already weakened by a 14-year blockade, has rapidly deteriorated. The United Nations said Thursday, at least 75,000 Palestinians were displaced due to Israeli attacks on Gaza. As recently as Tuesday the U.N. had reported the number as 52,000.

Medical supplies, water and fuel for electricity are running low in the territory, on which Israel and Egypt imposed the blockade after Hamas seized power in 2007. Israeli attacks have damaged at least 18 hospitals and clinics and destroyed one health facility, the World Health Organization (WHO) said. Nearly half of all essential drugs have run out. Two of Gaza’s most prominent doctors, including the No. 2 in Gaza’s coronavirus task force, were killed when their homes were destroyed.

Just as Gaza was climbing out of the second wave of coronavirus infections, its only virus testing lab was damaged by an airstrike and has been shut. Health officials fear that further outbreaks may occur among the tens of thousands of displaced residents who are crowded into makeshift shelters.

At one U.N.-run school where 1,400 people were taking shelter, Nawal al-Danaf and her five children were crammed into a single classroom with five other families. Blankets draped over cords crisscrossed the room to carve out sleeping spaces.

“The school is safe from the war, but when it comes to corona, with five families in a room, everyone infects each other,” said al-Danaf, who fled Israeli tank shelling on the northern Gaza town of Beit Lahiya a few days ago.

Blankets and laundry dangled from the railings of the school’s balcony, as women looked down into a yard where children were playing and men sat chatting. No one wore a mask or could do any social distancing in the cramped quarters.

Gaza’s health infrastructure was already collapsing before this latest war, said Adnan Abu Hasna, a spokesperson for UNRWA, the U.N. agency that provides vital assistance to 75% of the enclave’s population who are refugees. “It’s frightening,” he said, according to The Associated Press (AP).

Now health facilities are struggling to handle both the casualties of war and the everyday needs of Gaza’s 2 million people.

“It’s layer-upon-layer of crisis. And there never is really enough time between each crisis to rebuild,” said Matthias Schmale, the UNRWA director in Gaza. “The (health care) system has gradually been quite significantly weakened. I wouldn’t say it’s on its knees, but getting close.”

The bombardment has driven more than 56,000 Gazans from their homes, fleeing into 59 schools run by UNRWA. The U.N. agency is providing them with water and basic hygiene supplies, including face masks. Unknown numbers more have taken refuge with relatives.

As of Monday, when the clinic was damaged, Gaza had recorded more than 105,000 coronavirus infections, including 986 deaths. Some 80 people were in critical condition with the virus. Gaza’s COVID-19 vaccination drive, already slow, has stopped, said WHO’s top official in Gaza, Sacha Bootsma. Just under 39,000 people, or 2% of Gaza’s population, have received vaccinations. There are only enough doses to vaccinate another 15,000, and those expire in June, raising fears they will be unusable by the time they can be given.

“In a war, there are responsibilities to protect health institutions and health care workers,” Schmale said. He said this week a senior lab technician who works at a main UNRWA health clinic was seriously wounded in an airstrike as he rushed home to help his wife evacuate. He is in intensive care with severe brain damage.

“The price the civilian population is paying is unbearable and unacceptable, and health care workers are an element of that,” Schmale said. “Our staff are as terrified as the rest of the population. They are really afraid to go to work after heavy nights of shelling or bombing.”

Only about half of government-run primary care centers are operating. Sixteen of UNRWA’s 22 health care centers were working as of Wednesday. Most of Gaza relies on the U.N. centers, according to UNRWA. All of the government’s 13 hospitals are running, though some have sustained damage, and as of Monday, 16 private or NGO-run hospitals were working.

But all are badly in need of emergency medical supplies. WHO listed some 40 key medicines and medical supplies that it is waiting for, including anesthetics, antibiotics, sutures and blood bags. Gaza’s border with Israel has been closed throughout the fighting.

During one brief opening, UNRWA was able to bring in five fuel trucks, enough to help it run its facilities for a few weeks. But other trucks of food and medicine could not enter, reportedly prevented by ongoing shelling. Two days ago, Egypt sent in a supply convoy that included medical supplies and fuel, but that fuel is expected to run out Thursday. If the border stays closed, supplies will begin to run out and “we will need so-called humanitarian corridors open to bring stuff in,” Schmale said.

The conflict in the Middle East has stirred up a diplomatic stand-off at the U.N. between France and the United States, the first open tension between the two allies since Biden took power. Despite guaranteed opposition from Washington, France proposed another draft U.N. Security Council resolution calling for the end of hostilities between Israel and the Palestinians, as well as humanitarian access to the Gaza Strip. According to the text obtained by Agence France-Press (AFP), the draft "demands an immediate cessation of hostilities" and calls for "intensification and acceleration of diplomatic efforts and support for a negotiated two-state solution."

The text has been circulated among the 15 Security Council members, who have until Thursday to weigh in, diplomats said. France has not given any indication on when a vote might be held. The U.S. has repeatedly vetoed similar resolutions in recent days, saying it is pursuing other avenues to solve the crisis.

France's latest proposal – announced in a statement from Paris on Tuesday evening – quickly drew a firm response from the U.S., signaling it would wield its veto again if needed. A U.S. spokesperson at the U.N. told AFP "we are focused on intensive diplomatic efforts underway to bring an end to the violence and that we will not support actions that we believe undermine efforts to de-escalate."

Meanwhile, top diplomats of several Muslim countries gathered in New York on Wednesday ahead of the U.N. General Assembly's special meeting on the situation in Palestine.

Pakistan's Foreign Minister Shah Mahmood Qureshi hosted a working dinner, which was attended by Turkish Foreign Minister Mevlüt Çavusoğlu, Palestine's Foreign Minister Riad Al-Malki, Tunisia Foreign Minister Othman Jerandi, President of the U.N. General Assembly Volkan Bozkir and envoys of The Organisation of Islamic Cooperation (OIC) countries in the U.N, according to a statement by Pakistan mission to the U.N.

Speaking on the occasion, Qureshi said the entire Muslim world is outraged over Israel's use of indiscriminate and disproportionate force against innocent Palestinians.

"He (Qureshi) reiterated Pakistan's strongest possible condemnation of Israel's deliberate and systematic assault against Palestinian worshippers in the Al-Aqsa Mosque during the month of Ramadan; violation of the sanctity of the holy sites; its policy of expansion of illegal settlements; as well as forced eviction of Palestinians, and demolition of their homes with impunity," the statement read, as Anadolu Agency (AA) reported. Qureshi also expressed gratitude to all OIC countries, who along with Pakistan, played a proactive role in convening the special meeting of the U.N. General Assembly.

"(I) hope that special meeting of the United Nations General Assembly will help send a strong message on behalf of the OIC to the international community to help end the Israeli aggression and to take concrete steps to find a solution to the Palestinian issue," the Pakistani minister said.