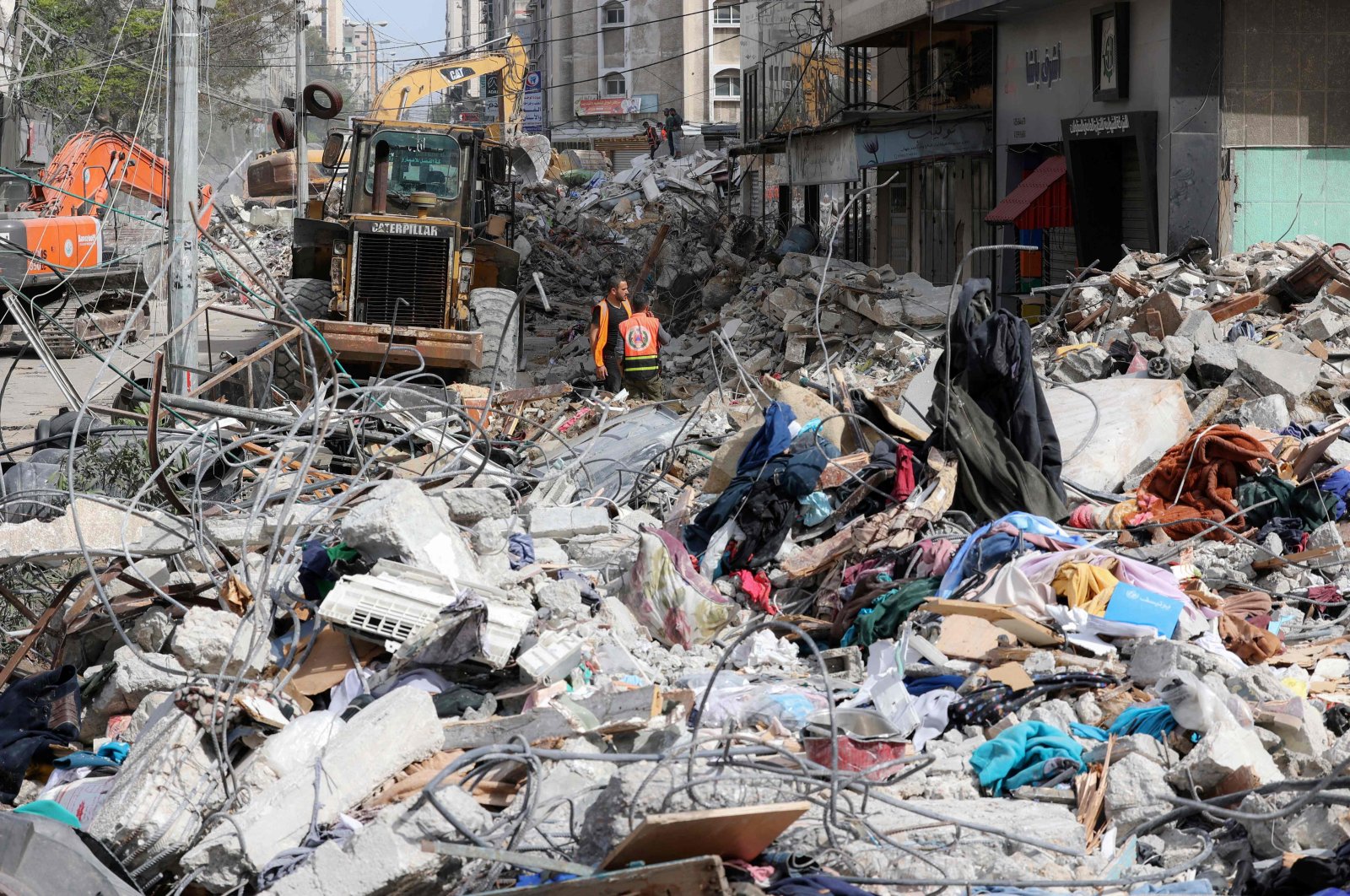 An excavator clears the rubble of a destroyed building in Gaza City's Rimal residential district following massive Israeli bombardment on the Hamas-controlled enclave, Gaza, May 16, 2021. (AFP Photo)
by Agencies May 16, 2021 6:18 pm
RECOMMENDED

The United Nations Secretary-General Antonio Guterres urged an end to the "senseless cycle of bloodshed, terror and destruction" and return to negotiations for a two-state solution to the conflict, as Israel continues to target Palestinian civilians in Gaza.

"The current hostilities are utterly appalling. This latest round of violence only perpetuates the cycles of death, destruction and despair, and pushes farther to the horizon any hopes of coexistence and peace," Guterres said during his address at the U.N. Security Council (UNSC).

The UNSC met for the third time to discuss the escalating tension between Israel and Palestine and Israel's recent air raids on Gaza.

"Rockets and mortars on one side and aerial and artillery bombardments on the other must stop," Guterres urged.

The U.N. continues to negotiate with all parties for a cease-fire, he said, stressing that "leaders on all sides have a responsibility to curb inflammatory rhetoric and calm the rising tensions."

Guterres said he is "appalled" by the deaths of Palestinian civilians, including women and children, in Gaza. He also "deplored" Israeli fatalities from rockets launched from Gaza.

The U.N. chief also warned that conflicts are not only dragging Israelis and Palestinians but also the region into a spiral of violence with devastating consequences and could create a new danger for the entire region.

"The United Nations is working tirelessly with all sides to restore calm," U.N. Middle East envoy Tor Wennesland told the council. "The international community has a crucial role to play. It must take action now to enable the parties to step back from the brink."

Truce efforts by Egypt, Qatar and the U.N. have so far offered no sign of progress. The United States sent an envoy to the region and President Joe Biden spoke with Israeli Prime Minister Benjamin Netanyahu and Palestinian President Mahmoud Abbas on Saturday.

A total of 181 Palestinians, including 52 children and 31 women, have been killed and 1,225 more injured since Israel started attacks on Gaza last Monday.

The tensions spread from East Jerusalem to Gaza after Palestinian resistance groups there vowed to retaliate against Israeli assaults on the Al-Aqsa Mosque and Sheikh Jarrah if they were not halted.