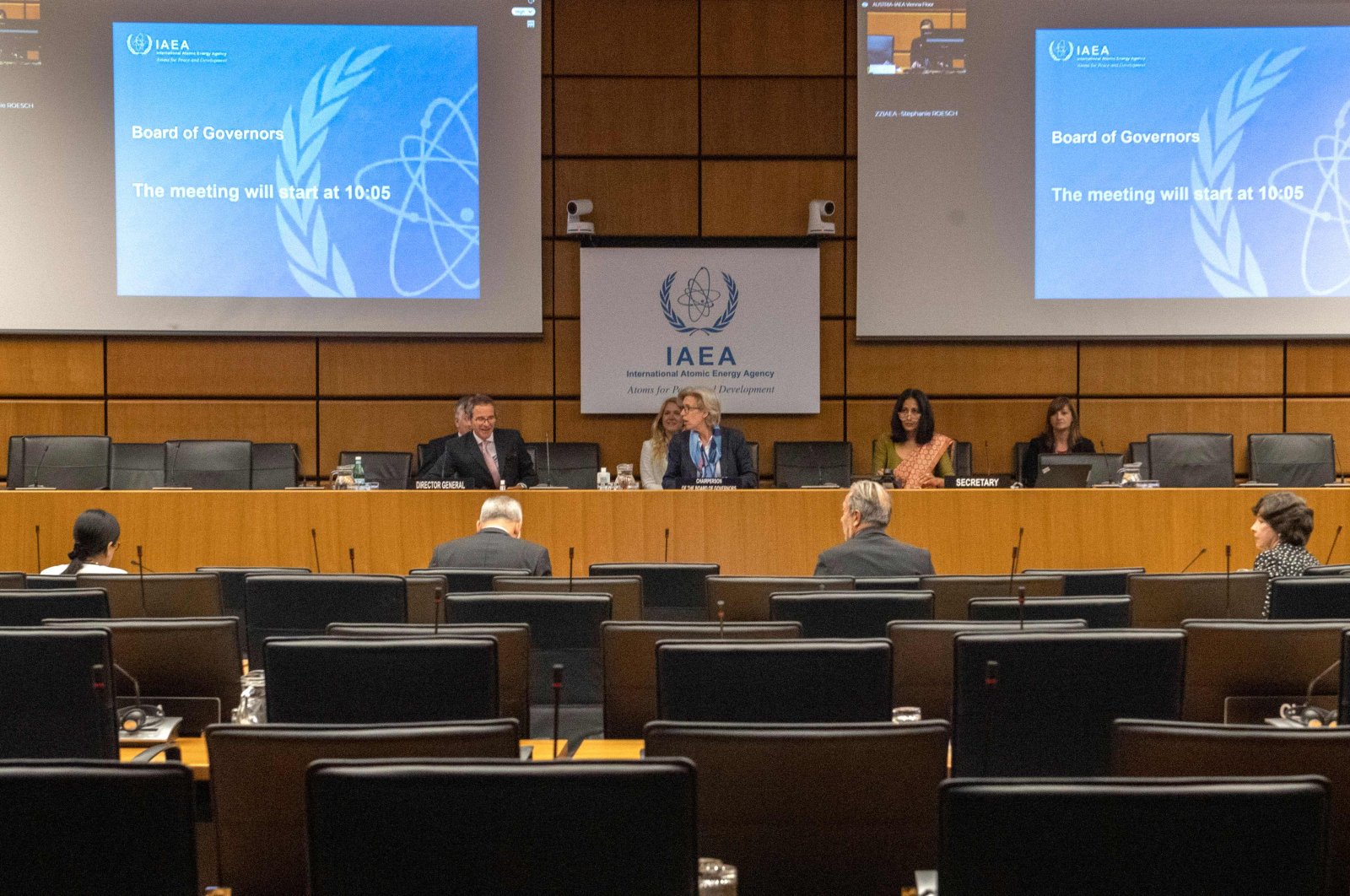 Rafael Grossi (L), director-general of the International Atomic Energy Agency (IAEA), opens a virtual meeting of the Board of Governors of the IAEA, due to coronavirus safety-related measures, at the agency's headquarters in Vienna, Austria, June 15, 2020. (AFP Photo)
by French Press Agency - AFP Jun 15, 2020 12:12 pm
RECOMMENDED

The U.N. nuclear watchdog's governing body began meeting on Monday as a row brews over Iran's refusal to allow access to two sites where nuclear activity may have occurred in the past.

The Vienna-based International Atomic Energy Agency (IAEA) expressed "serious concern" in a report earlier this month that Iran has been blocking inspections at the sites.

The Board of Governors, one of the agency's policy-making bodies, is expected to discuss the report during its meeting. If they pass a resolution critical of Iran, it would be the first of its kind since 2012.

Even though the two sites are not thought to be key to Iran's current activities, the agency says it needs to know if past activities going back almost two decades have been properly declared and all materials accounted for.

The report detailed efforts made by the agency's officials to get access to the locations.

Iran told the agency the report was a source of "deep regret and disappointment" and hinted the queries were based on "fabricated information" from "intelligence services."

Western states have voiced concern over Iran's denial of access to the sites, with the United States being particularly vocal.

In a statement to the Board of Governors opening this week's meeting, IAEA Director General Rafael Grossi called on Iran "to cooperate immediately and fully with the agency, including by providing prompt access to the locations specified by us."

The latest row over access comes as a landmark deal between Iran and world powers in 2015 continues to unravel.

Under the deal, known as the Joint Comprehensive Plan of Action (JCPOA), Iran committed to curtailing its nuclear activities in return for sanctions relief and other benefits.

But the country has slowly abandoned its commitments in retaliation for U.S. President Donald Trump's decision two years ago to renounce the deal and reimpose swingeing sanctions.

Iran's stockpile of enriched uranium is now almost eight times the limit fixed in the accord, according to an IAEA assessment published earlier this month.

However, the level of enrichment is still far below what would be needed for a nuclear weapon.

The IAEA says it continues to have access to all the facilities needed to monitor Iran's current nuclear activity.

The latest tension will further complicate efforts by the deal's EU signatories – the so-called E3 of France, Germany and Britain – to keep the deal from collapsing.

Trump has called for the E3 to follow his lead and leave the deal.

Last month, the U.S. said it was ending sanctions waivers for nations that remain in the Iran nuclear accord – a move likely to have the most impact on Russian firms working on Iran's nuclear program.

The American move brought condemnation from the E3 and was branded "unlawful" by Tehran.

Iran is also concerned that the U.S. is pushing for an extension to an international arms embargo against Tehran which is set to be progressively eased from October.