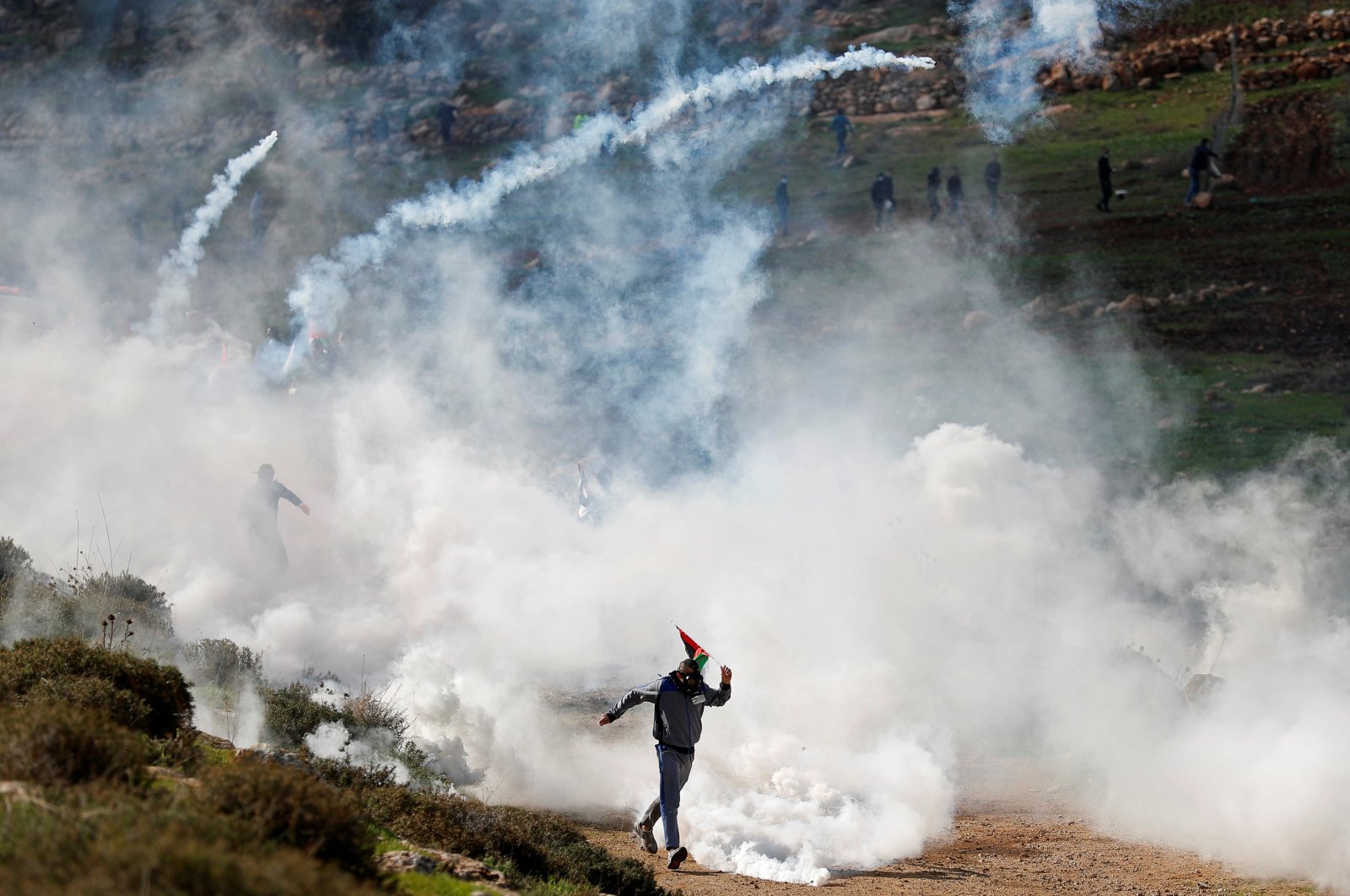 A Palestinian demonstrator runs away from tear gas canisters fired by Israeli forces during a protest against Jewish settlements, in Beit Dajan in the Israeli-occupied West Bank, Palestine, Dec. 18, 2020. (Reuters Photo)
by Agencies Dec 18, 2020 1:58 pm
RECOMMENDED

United Nations human rights experts called Thursday for an impartial and independent investigation into the killing of a 15-year-old boy by Israeli security forces during the weekly anti-settlement demonstrations on Dec. 4 in the occupied West Bank, citing a lack of accountability.

The experts asserted that the killing of Nihad Abu Ali by the Israeli Defense Forces (IDF) took place under circumstances where there was no threat of death or serious injury to the Israeli security forces and is a grave violation of international law.

"Intentional lethal force is justified only when the security personnel are facing an immediate threat of deadly force or serious harm," they said, according to remarks carried by Anadolu Agency (AA).

The Palestinian teenager was shot and seriously injured by an Israeli soldier in the village of Al-Mughayir, 27 kilometers (16.8 miles) northeast of Ramallah, while he was protesting against the construction of a nearby illegal Israeli settlement outpost.

According to the U.N. Human Rights Office, demonstrators had thrown stones at Israeli security forces, who responded with rubber-coated metal bullets, tear gas and eventually live ammunition. Abu Ali was hit in the abdomen with a bullet from a 0.22 Ruger Precision Rifle fired by an Israeli soldier from an estimated range of 100-150 meters (330-500 feet). He was rushed to hospital after failed attempts to stop his internal bleeding, where he was pronounced dead.

Israel has been criticized by a U.N. human rights body for its killings of protesters in Gaza and the treatment of the Palestinians, declaring it a "war crime" under the Statute of Rome. The Israeli military has injured nearly 1,050 Palestinian children across the occupied Palestinian territories between Nov. 1, 2019, and Oct. 31, 2020. Meanwhile, civil society organizations documented 155 Palestinian children's deaths by Israeli security forces using live ammunition or crowd-control weapons since 2013. The high casualty toll has triggered a diplomatic backlash against Israel and new charges of excessive use of force against unarmed protesters.

According to experts, investigations led by the IDF of fatal shootings of Palestinians by their soldiers rarely result in appropriate accountability. Only three indictments on criminal charges have been issued for offenses directly tied to those killings. In one case, the charges were subsequently dropped. In the second case, the responsible soldier reached a plea deal and was sentenced to nine months in prison for death by negligence. In the third case, a soldier was convicted of not obeying orders and sentenced to one month in military prison.