US adopts map of Morocco that includes disputed Western Sahara 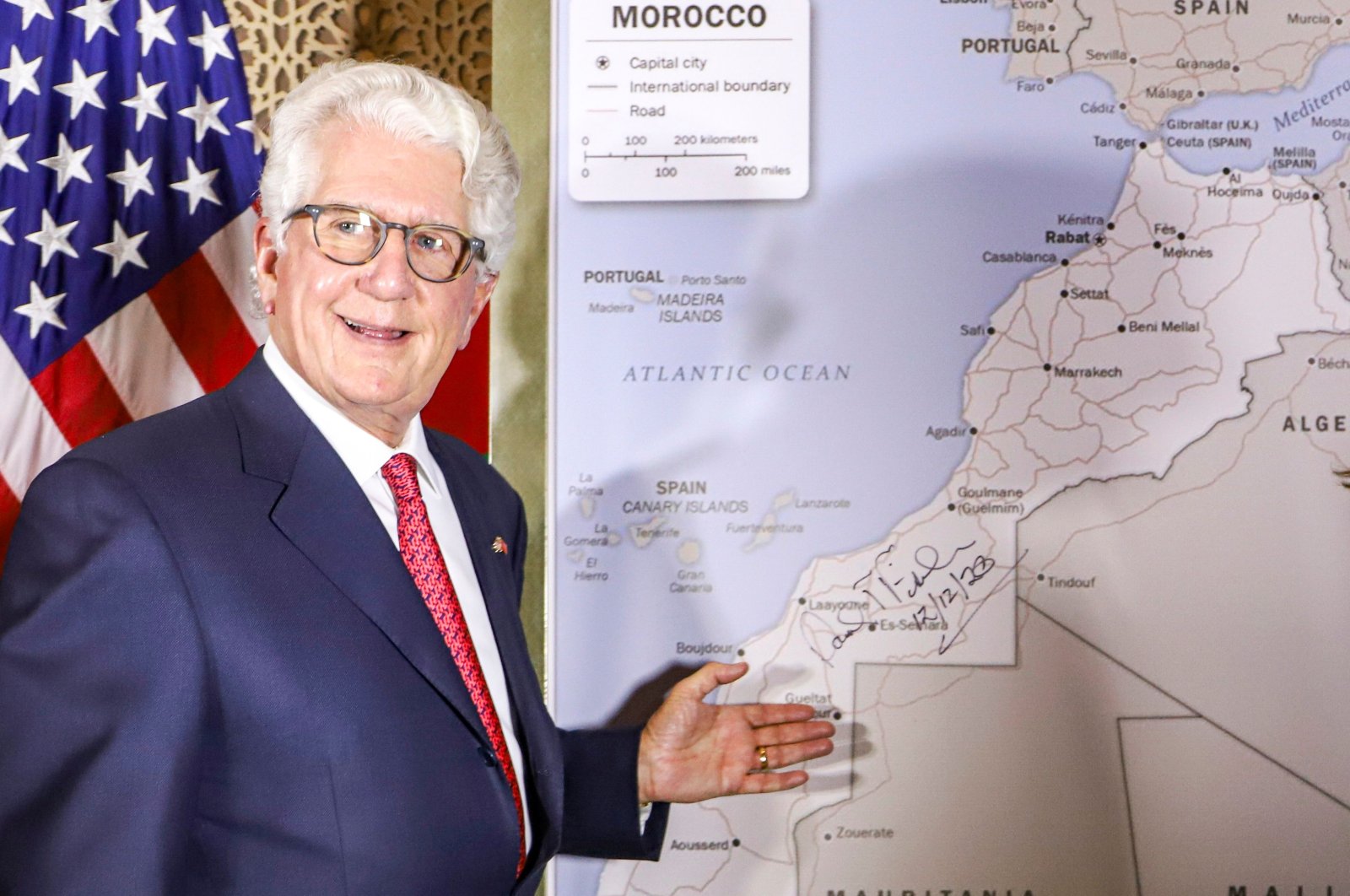 David T. Fischer, U.S. ambassador to the Kingdom of Morocco, stands in front of a U.S. State Department-authorized map of Morocco recognizing the internationally disputed territory Western Sahara as a part of the North African kingdom, in the capital Rabat, Morocco, Dec. 12, 2020. (AFP Photo)
by DAILY SABAH WITH AGENCIES Dec 13, 2020 2:31 pm
RECOMMENDED

The United States on Saturday adopted a "new official" map of Morocco that includes the disputed territory of Western Sahara, the U.S. ambassador to Rabat said.

"This map is a tangible representation of President Trump's bold proclamation two days ago, recognizing Morocco's sovereignty over Western Sahara," Ambassador David Fischer said according to a statement seen by Agence France-Presse (AFP). He then signed the "new official U.S. government map of the kingdom of Morocco" at a ceremony at the U.S. Embassy in the capital Rabat. The map will be presented to Morocco's King Mohammed VI, he added.

Western Sahara is a disputed and divided former Spanish colony, mostly under Morocco's control, where tensions with the Polisario Front have simmered since the 1970s. The Algerian-backed movement holds a fifth of Western Sahara and has campaigned for a vote on self-determination through decades of war and deadlock.

Morocco on Thursday became the fourth Arab state this year – after the United Arab Emirates (UAE), Bahrain and Sudan – to announce it had agreed to normalize relations with Israel. With barely a month left in office, U.S. President Donald Trump fulfilled a decades-old goal of Morocco's by backing its sovereignty in Western Sahara. The move was part of the outgoing American leader's diplomatic push to bring Israel and Arab states together. He announced Thursday that Morocco was now the fourth Arab state this year to recognize Israel. Trump said Israel and Morocco would restore diplomatic and other relations, including the immediate reopening of liaison offices in Tel Aviv and Rabat and the eventual opening of embassies. U.S. officials said there will also be joint overflight rights for airlines.

The Polisario condemned "in the strongest terms the fact that Trump attributes to Morocco something which does not belong" to the country, namely sovereignty over Western Sahara. The movement dismissed the announcement and vowed to fight on until Moroccan forces withdraw from all of Western Sahara.

The prime minister of Algeria – Morocco's neighbor, regional rival and the key foreign backer of the Polisario Front – on Saturday criticized "foreign maneuvers" that he said were aimed to "destabilize Algeria."

"There is now a desire by the Zionist entity to come closer to our borders," Prime Minister Abdelaziz Djerad said, in reference to Israel.

The deal is the result of talks conducted by the president's senior adviser, son-in-law Jared Kushner, and his chief international negotiator, Avi Berkowitz. Morocco has for years had informal ties with Israel. They established low-level diplomatic relations during the 1990s following Israel’s interim peace accords with the Palestinians, but those ties were suspended after the outbreak of the second Palestinian uprising in 2000.

Both the Palestine Liberation Organization (PLO) and Hamas, which controls the Gaza Strip, condemned the deal, just as they did with the earlier Israeli normalization accords with the UAE, Bahrain and Sudan.

“Any Arab retreat from the (2002) Arab peace initiative, which stipulates that normalization comes only after Israel ends its occupation of Palestinian and Arab lands, is unacceptable and increases Israel’s belligerence and its denial of the Palestinian people’s rights,” Bassam Al-Salhe, a member of the PLO's Executive Committee, told Reuters.