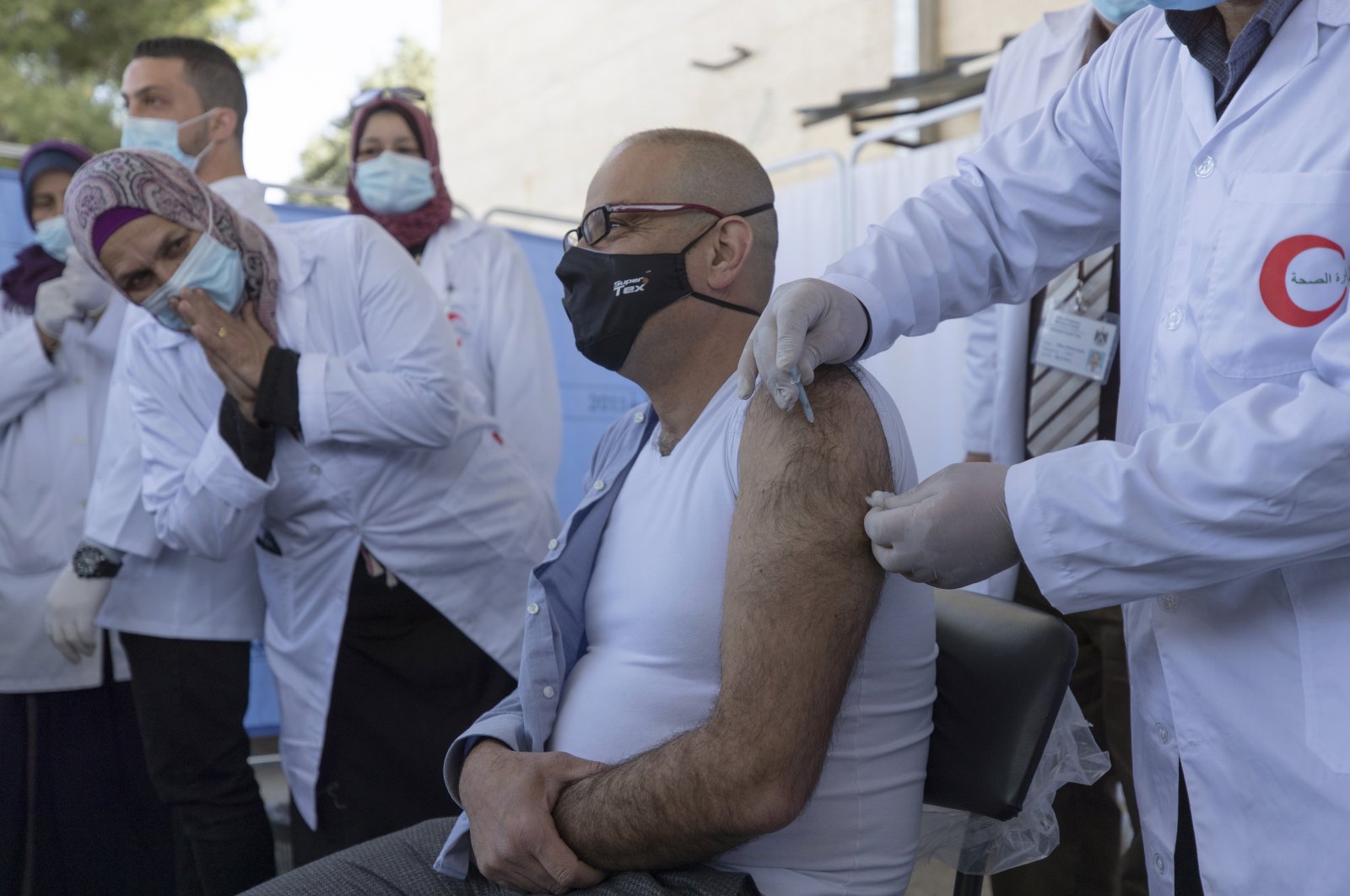 A medic administers a Moderna COVID-19 vaccine to a fellow medic during a campaign to vaccinate front-line medical workers, at the health ministry, in Bethlehem, the West Bank, Palestine, Feb. 3, 2021. (AP Photo)
by DAILY SABAH WITH AGENCIES Feb 09, 2021 1:05 pm
RECOMMENDED

A shortage of COVID-19 vaccines is dashing hopes of inoculating most of the Palestinian population in the West Bank and the Gaza Strip as Israel refuses to provide the occupied territories with promised jabs.

The Palestinian Health Ministry started a COVID-19 vaccination campaign on Feb. 2, with health workers being first in line. Palestinian health authorities have received only 2,000 of the 5,000 doses pledged by Israel to the Ramallah-based Palestinian Authority (PA).

"We are waiting to receive 300-500 doses for the medical care providers in the Gaza Strip from the 2000 doses sent by Israel," Abd Al-Nasser Soboh, the head of the World Health Organization's (WHO) emergency team in Gaza, told Anadolu Agency (AA).

Israel, which is carrying out an aggressive inoculation campaign for its own citizens, has faced mounting global pressure in recent weeks, including from the United Nations, to help Palestinians access vaccines. Tel Aviv, however, refused to give the vaccine to the Palestinians, saying the PA is responsible for public health under the Oslo Accords.

The United Nations as well as leading rights groups have argued that the Jewish state must ensure the Palestinians are vaccinated, citing its obligations under international law as an occupying military power. Israel has occupied the West Bank since the 1967 Six-Day War. Its forces withdrew from Gaza in 2005, but have maintained a tight blockade on the strip since 2007, the year Hamas took power.

Earlier, Israeli Prime Minister Benjamin Netanyahu told journalists that he "approved" the small vaccine shipment to the West Bank given Israel's "interest in there not being high infections there."

"We are not New Zealand and we are not Australia," Netanyahu said at a rare press conference. "We are joined to the Palestinians; they work here, they come here."

The PA previously said it expects to receive vaccines through the U.N.-backed COVAX program, set up to help less wealthy nations respond to the pandemic. It also had signed contracts with four vaccine providers, including the makers of Russia's Sputnik V. Its procurement arrangements should be enough to cover 70% of the Palestinian population in the West Bank and Gaza, the PA has said.

In the West Bank, home to some 2.8 million Palestinians, more than 108,000 coronavirus cases have been recorded, including 1,325 deaths. In Gaza, a deeply-impoverished territory with an estimated 2 million residents, Hamas authorities have registered more than 51,000 cases, including 523 deaths.

Assistant Health Minister Ali Abd-Rabu said Palestinian authorities are seeking to acquire more doses from other sources so they can immunize the 5.1 million people in the West Bank and Gaza Strip.

"We do our obligations towards our people," he told AA. "We have registered on the COVAX initiative to provide vaccines for 20% of the population."

Abd-Rabu said 37,440 coronavirus vaccines produced by the American drug company Pfizer and the German firm BioNtech will be dispatched by the end of February under the COVAX initiative.

Palestinians say they will receive another 240,000-400,000 doses of the AstraZeneca vaccine from COVAX by the end of February. The Palestinian Health Ministry has already received 10,000 doses of Russia's Sputnik V vaccine. According to the WHO office in Gaza, health authorities are waiting to receive 11,200 vaccine doses before launching a mass inoculation campaign in the Gaza Strip. Palestinian civilians, however, fear that the vaccine shortage could cost the lives of their beloved ones.

"We lost our neighbor due to COVID-19 this week," said Sahar Faroun, 27, from the town of Al-Ezareyah, East of Jerusalem. "Every day we lose one of our beloved because of the shortage of the vaccine," she said. "Most of the infected people are elders, and they pass away without anyone caring about them."

With a population of around 22,000 Palestinians, the town of Al-Ezareyah is located adjacent to the Ma'ale Adumim settlement, where 38,155 people live. The vaccines are available to the settlers, but not to the Palestinians.

"When the pandemic started, I was looking for any hope to see an end to these hard days," said Lara Soboh, 28, an accountant, who lives between Ramallah and Nablus in the West Bank.

"When news came about a new vaccine against the virus, I felt that hope is still there, but months passed and we didn't receive any," Soboh lamented. "Once I have the chance to receive the vaccine, I will regain my free movement inside the West Bank and outside."

The PA's limited control in the West Bank is another hurdle for efforts to immunize the Palestinian population. The PA only controls 38% of the West Bank, while 62% of the occupied territory is under Israel's military control.

Since December, more than 3.4 million of Israel's 9 million people have received a coronavirus vaccine jab in what is seen as the world's fastest per-capita campaign. Despite the inoculations, however, Israel has been registering a daily average of 6,500 new COVID-19 cases, down from around 8,000 in mid-January. A strict nationwide lockdown, in force since Dec. 27 and extended four times to combat the infection rate, has not helped slow down the disease as January was the nation's deadliest month yet, with more than 1,000 COVID-19 fatalities, according to Agence France-Presse (AFP).

Israeli Prime Minister Benjamin Netanyahu urged citizens aged 50 and over to get vaccinated while warning people to not drop their guard as virus limitations are removed.

"Relaxing the lockdown does not mean that the rise in morbidity is behind us. To the contrary, it isn't, it's still around and in full force," he said in remarks relayed by his office. The government also increased fines for businesses or schools operating in violation of the restrictions.

Many ultra-Orthodox institutions had opened during the lockdown in defiance of instructions, and some frustrated entrepreneurs have announced they will reopen their businesses even before the lockdown is entirely lifted.