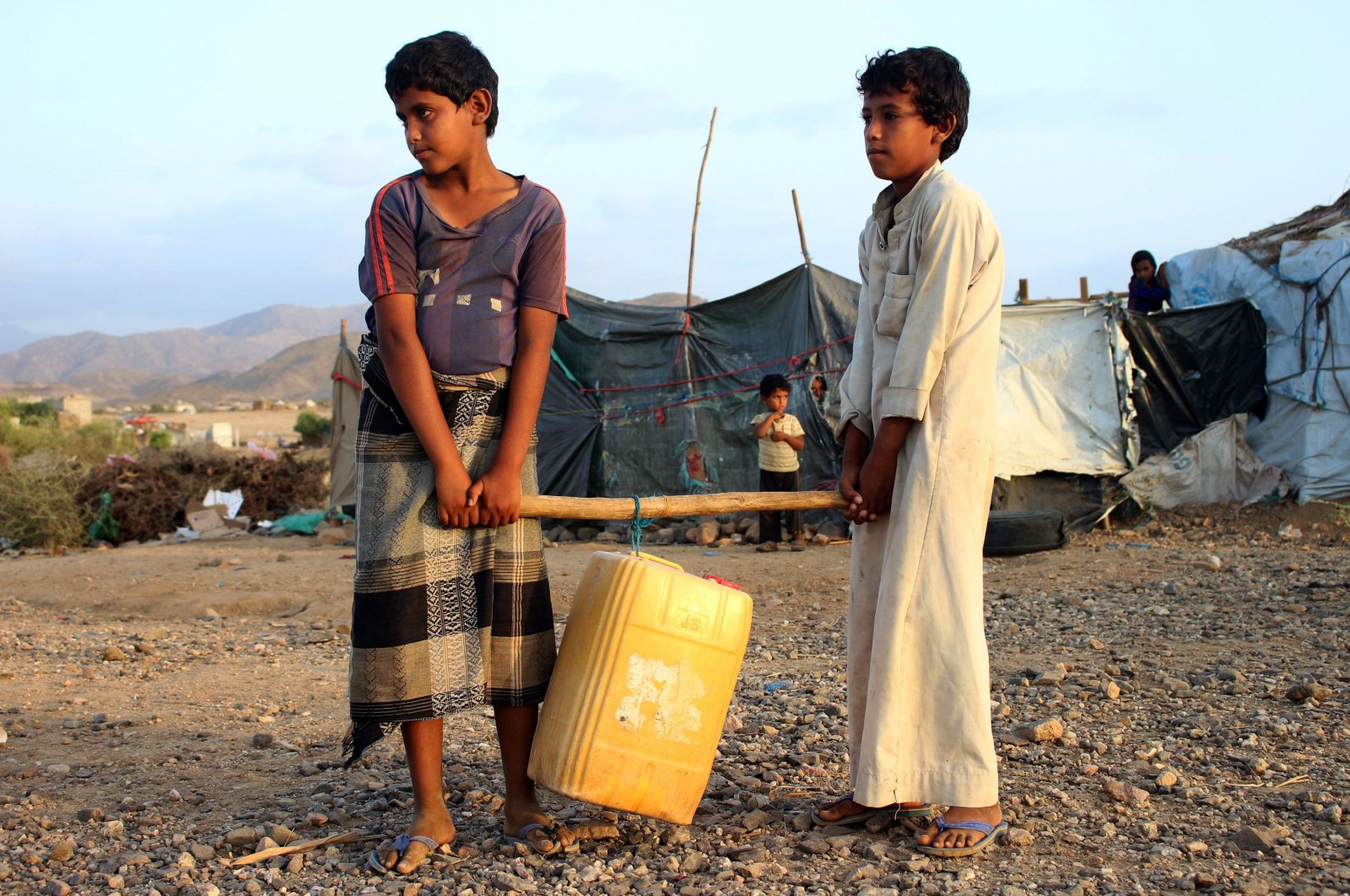 Boys carry a jerrycan filled with water from a cistern at a makeshift camp for displaced Yemenis in severe shortage of water in the northern Hajjah province, Tuesday, March 24, 2020. (AFP Photo)
by Yusuf Selman İnanç Mar 26, 2020 1:18 pm
RECOMMENDED

Yemen is among the few countries which have not reported any coronavirus infections yet. Yemen’s neighboring country Saudi Arabia continues to grapple with the impacts of the virus, including the closure of the Mecca and Medina hold sites and a caseload of at least 900. Yemeni officials, however, have not mentioned the presence of the virus in the war-torn country. It does not imply that the country has immunity against the virus. This just points to the fact that an ongoing war has deteriorated the health system as a Norwegian Refugee Council (NRC) report indicated on Tuesday.

According to the NRC, Yemen is unable to take any precautions against the outbreak of the coronavirus, increasing the concerns as to what may happen in case of an outbreak. The NRC report said “any outbreak could have catastrophic consequences for displaced families. Five years of war have damaged and destroyed thousands of hospitals, and water and sanitation systems have collapsed.” Underlining the presence of other contagious diseases such as cholera, which claimed thousands of lives across the country, the NRC’s Yemen country director, Mohammed Abdi said: “We’re extremely concerned that on top of everything else, the possibility of coronavirus reaching Yemen will have devastating consequences for an already overstretched health system and vulnerable population. Five years of war have crippled Yemen’s ability to respond to an outbreak, and it is now a race against time to prepare.”

One of the precautions against the spread of an outbreak was to suspend flights to the country. However, this measure has had a negative impact since millions of people are in dire need of humanitarian aid, which is transferred by plane to cargo ships. The NRC said its activities had to be scaled back, being limited to the delivery of only the most essential humanitarian aid. The report said: “In the event of an outbreak and a complete lockdown any prolonged closure of the airports and ports could have a massive impact on the humanitarian situation with Yemen relying heavily on imported food, fuel and medicines.”

The war in Yemen has been going on for six years, dragging regional and international actors to the scene. On the one hand, a Saudi Arabia-led coalition backs the internationally recognized government but at the same time, has repeatedly been accused of committing war crimes and violating human rights. On the other hand, Iranian-backed Shiite militias, the Houthis, have been waging a war in a bid to take control of the country. As part of the latest efforts for a cease-fire, the United Nations offered a plan this week. U.N. Secretary-General Antonio Guterres urged warring parties to halt the arms exchange since the consequences of a coronavirus outbreak would be unbearable. Despite the fact that the warring parties welcomed the offer, the cease-fire has not been implemented on the ground yet.