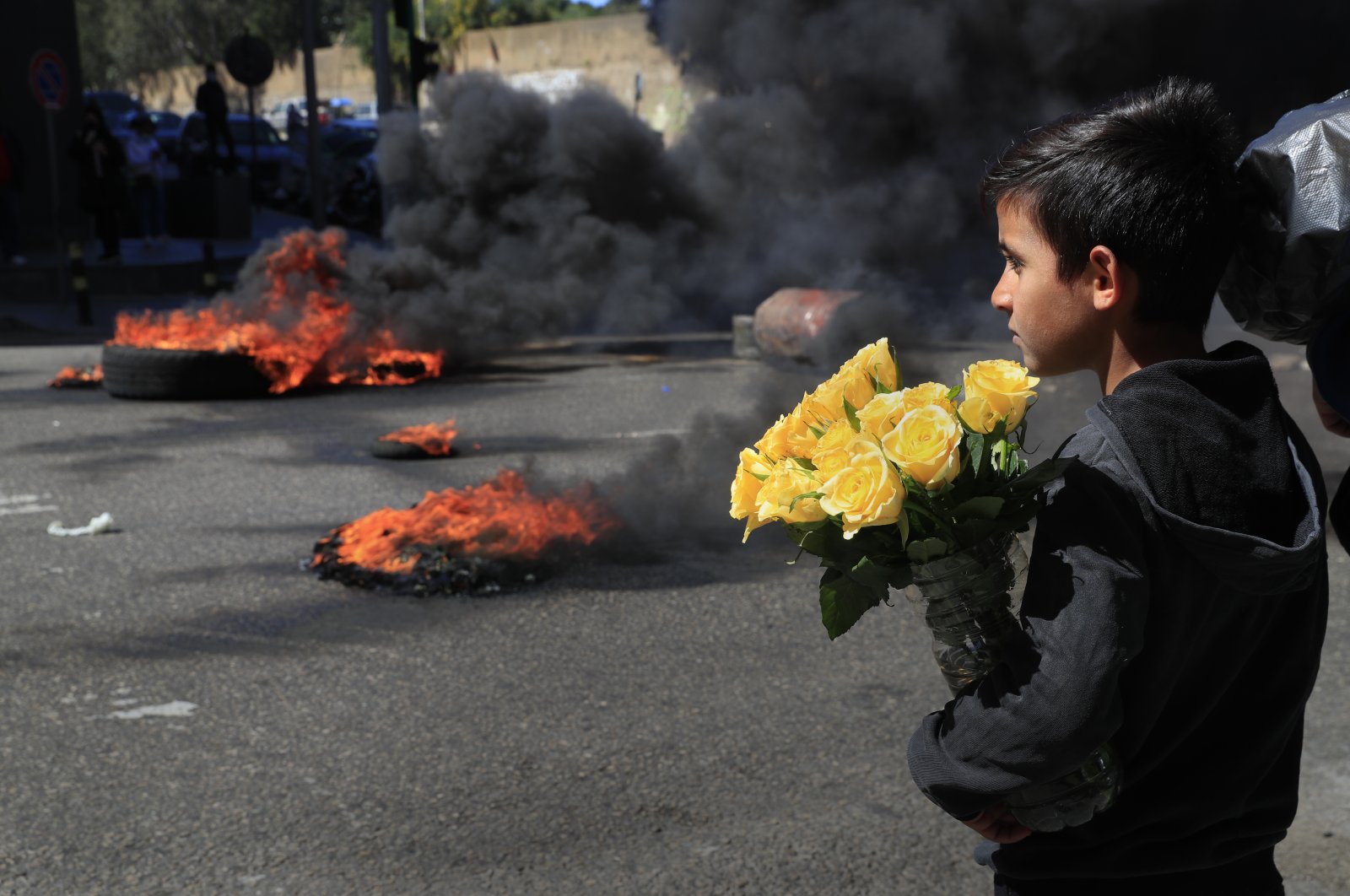 A Syrian boy who sells flowers on the street watches protesters burn tires to block a main road during a protest against the crash of the local currency, in Beirut, Lebanon, March 16, 2021. (AP Photo)
by Associated Press
Mar 17, 2021 9:09 am

Outraged protesters returned to the streets of Lebanon's capital Tuesday, blocking roads with burning tires and garbage containers as the currency continued to plummet to all-time lows and the country’s financial crisis intensified.

The protests resumed, although in smaller numbers, following several days of relative calm as the Lebanese pound continued its slide, plunging to a new low of 15,000 to the U.S. dollar on the black market.

"Where are the people? Come down, we are hungry, we are fed up!” yelled Ahmad Shuman, a protester frustrated at the small number of people taking part in demonstrations.

In another Beirut neighborhood, small groups of young men, some driving scooters, pelted shop windows with stones and asked them to close in an apparent attempt to broaden public outrage and force shutdowns.

In a panic, motorists queued outside gas stations fearing rising prices. Police went around to some gas stations in the south of Lebanon to ensure no one was hoarding fuel in anticipation of price hikes.

The currency has lost 90% of its value since October 2019, when anti-government protests erupted, including more than 25% in the past few weeks alone. Inflation and prices of basic goods have skyrocketed in the country, which imports more than 80% of its basic goods.

Senior politicians, meanwhile, have refused to work together to form a new government that would implement the reforms needed to extract the nation from the crisis.

The currency crash has pushed more than half the population into poverty. It has also depleted foreign reserves, raising concerns that Lebanon's central bank will not be able to finance subsidies of some basic commodities, including fuel in coming weeks.

Meanwhile, lawmakers approved $200 million in assistance from the central bank's shrinking foreign reserves to go to Lebanon's electricity company. The transfer is to cover fuel purchases for the next few weeks to prevent the country from plunging into darkness.

The crisis is posing the gravest threat to Lebanon’s stability since the 1975-90 civil war. France’s foreign minister warned last week that Lebanon is running out of time before total collapse, putting the blame squarely on the country’s leaders whose refusal to come together to form a government has exacerbated the crisis.

U.S. State Department deputy spokesperson Jalina Porter, speaking to reporters in Washington on Monday, said the U.S. is concerned about developments in Lebanon and the apparent inaction of the country’s leadership in the face of multiple ongoing crises.

"Lebanon’s political leaders need to put aside their partisan brinkmanship and form a government that will quickly implement critical and long-needed reforms, restore investor confidence, and rescue the country’s economy,” she said.

Lebanon’s government resigned in August following a massive explosion at Beirut’s port that killed 211 people, wounded more than 6,000 and damaged entire neighborhoods in the capital.

Disagreements between President Michel Aoun, who is an ally of the militant group Hezbollah, and Prime Minister-designate Saad Hariri, who is opposed to the group, have so far delayed the formation of a Cabinet. Hariri was chosen for the post in October.