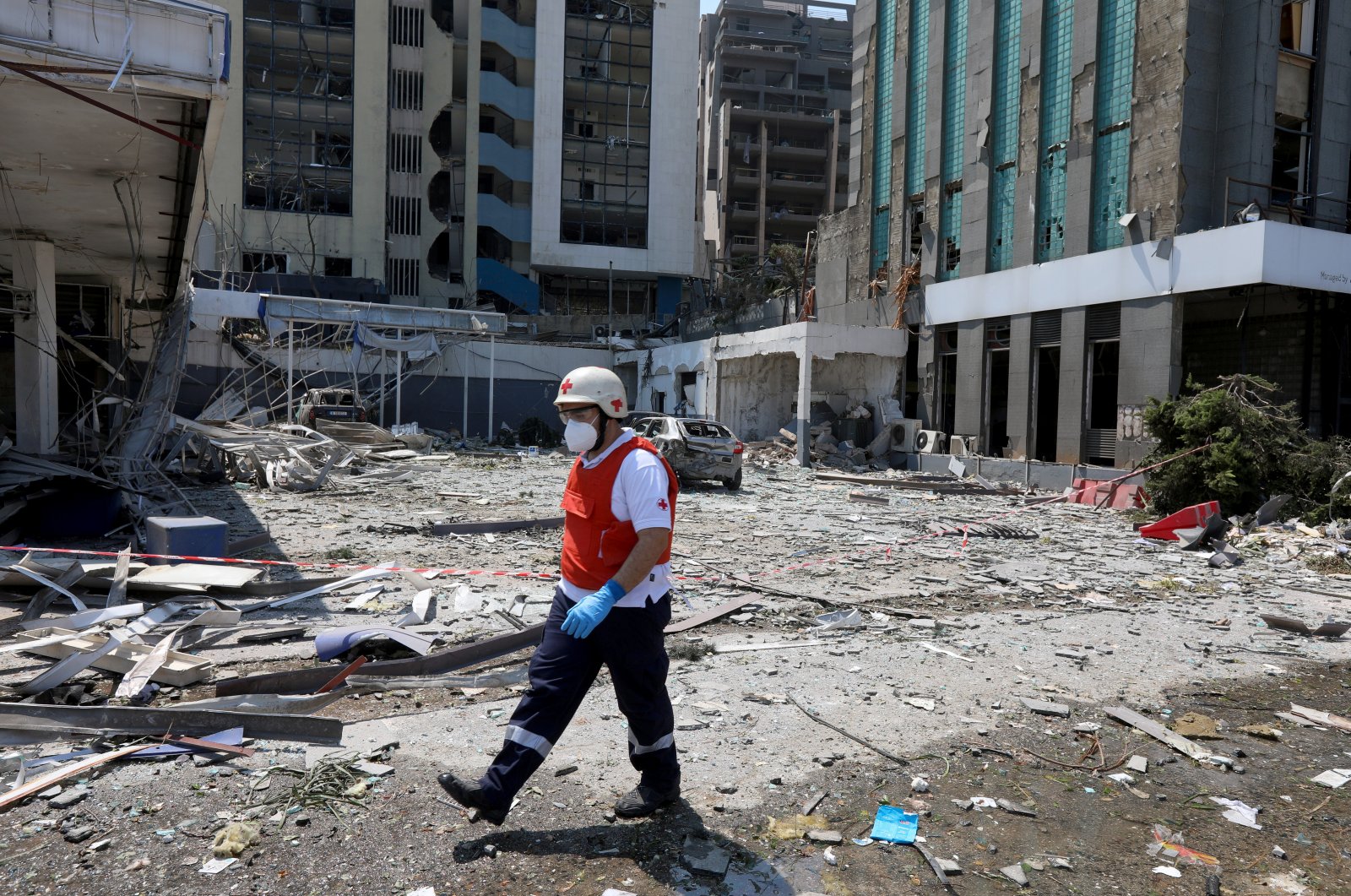 Emergency medical aid and pop-up field hospitals were dispatched to Lebanon on Wednesday, as the world offered assistance and paid tribute to the victims of the huge explosion that devastated Beirut.

The blast, centered on the city's port, caused massive destruction and killed at least 113 people, heaping misery on a country already in crisis.

Emergency medical aid from Kuwait arrived in the Lebanese capital Wednesday morning, as the Lebanese Red Cross said that more than 4,000 people were being treated for injuries after the explosion which sent glass shards and debris flying.

Lebanon's Prime Minister Hassan Diab has called on "friendly countries" to support a nation already reeling from its worst economic crisis in decades as well as the coronavirus pandemic.

President Recep Tayyip Erdoğan was one of the first heads of state to offer help to Lebanon.

In a phone call, Erdoğan extended his condolences to his counterpart Michel Aoun, as well as to the Lebanese people, Turkey's Communications Directorate said in a statement.

Erdoğan said Turkey would stand by Lebanon and was ready to provide humanitarian assistance, especially in terms of health care, to the Lebanese people.

He also published a message in Arabic on Twitter.

"I offer my condolences to the relatives of those who have lost their lives in the explosion at the port of Beirut and I pray Allah gives them patience and stamina,” Erdoğan said.

Gulf states were also among the first to respond, with Qatar announcing it would send field hospitals to ease pressure on Lebanon's strained medical system.

Crews at Doha's Al-Udeid air base loaded hundreds of collapsible beds, generators and burn sheets onto an air force cargo plane, one of four due to fly from the Gulf to the Mediterranean on Wednesday.

Iran's President Hassan Rouhani said in a message to his Lebanese counterpart that Tehran was "ready to offer medical and medicinal aid and help treat the injured." Jordan's King Abdullah II also promised to dispatch a field hospital.

"The field hospital will include specialists and medical staff, to contribute in offering medical services and treatment to support our brothers in Lebanon," Jordanian state television said in a report.

Dutch authorities announced that 67 aid workers were headed for Beirut, including doctors, police officers and firefighters.

Close allies and traditional adversaries of Lebanon alike sent their condolences, with Iran and Saudi Arabia – long rivals for influence over the country – both sending messages of support.

"Our thoughts and prayers are with the great and resilient people of Lebanon," Iranian Foreign Minister Mohammad Javad Zarif tweeted.

Saudi Arabia said it was following the situation with "great concern."

Unusually, neighboring Israel offered humanitarian aid – to a country with which it is still technically at war.

"Defence Minister Benny Gantz and Foreign Minister Gabi Ashkenazi, on behalf of the State of Israel, have offered the Lebanese government – via international intermediaries – medical and humanitarian aid, as well as immediate emergency assistance," a statement said.

U.S. President Donald Trump said, "it looks like a terrible attack" and that U.S. generals had told him that the powerful explosions appeared to have been caused by a "bomb of some kind," without offering evidence.

Egypt expressed "deep concern" at the destruction, and Arab League chief Ahmed Aboul Gheit offered condolences, stressing "the importance of finding the truth about the explosions."

Syria's Bashar Assad wrote to Aoun that "on behalf of the Syrian Arab people, we extend our sincere condolences to you and the Lebanese people."

Outside the region, President Vladimir Putin said that "Russia shares the grief of the Lebanese people," according to a Kremlin statement.

"I ask you to convey words of sympathy and support to the families and friends of the victims, as well as wishes for a speedy recovery to all affected."

French President Emmanuel Macron said in a tweet in Arabic that "France is at the side of Lebanon. Always."

His office said two military planes would take off for Lebanon later Wednesday with search and rescue experts, 15 tons of sanitary equipment and a mobile clinic.