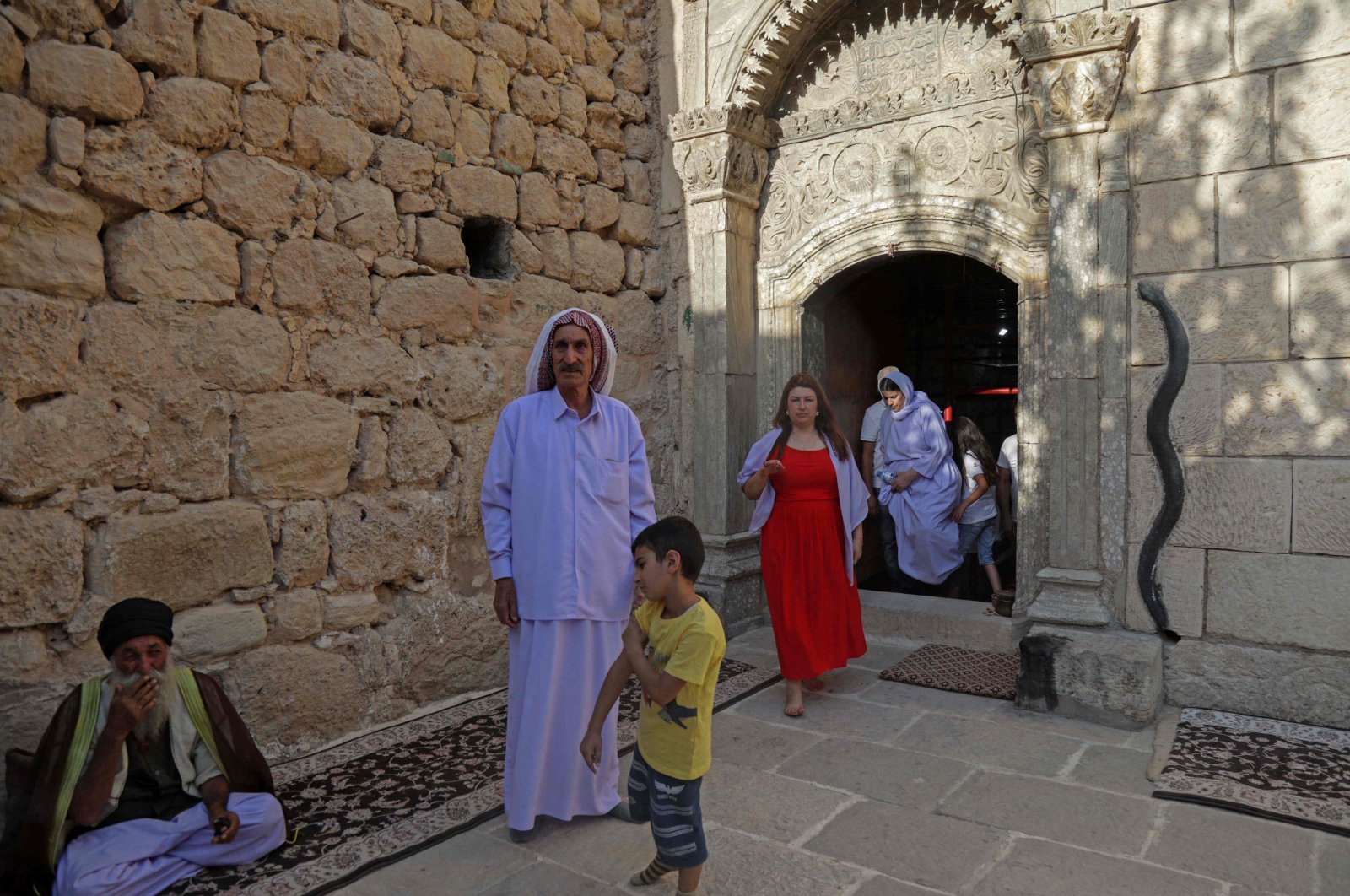 Iraqi Yazidis gather during a religious ceremony at the Lalish temple in a valley near the city of Dohuk, in northern Iraq, on August 1, 2022. (Photo by SAFIN HAMED / AFP)
by Agencies Aug 04, 2022 6:34 pm
RECOMMENDED

Living in harsh conditions in camps for eight years and unable to return to their homes due to PKK terrorists in northern Iraq's Sinjar region, the Yazidi community says the international community has abandoned them.

"We can't go back to our homes due to some (PKK) forces in Sinjar and the problems people are experiencing there," Saud Seydo, a resident of the Sharya refugee camp, told Anadolu Agency (AA).

"International organizations give us no help going back to our homes," he added.

"We have no income, our financial situation is not good, and we cannot return to Sinjar," another resident adds.

They are afraid of returning to their houses, refugee Ali Hudada said, adding that if the Iraqi government officially declares Sinjar safe, then they can return.

In an Aug. 3, 2014 attack on the Sinjar district, where Yazidis live, Daesh kidnapped and killed thousands of people, including women and children, or detained them in areas they hold.

Some 300,000 people lived in Sinjar before the attacks, two-thirds of them Yazidi and the rest Sunni Kurds and Arabs.

Daesh has been active in the Iraqi provinces of Salahuddin, Anbar, Kirkuk and Diyala, at a time when the federal government is struggling to contain attacks by the terrorist group by launching security and military operations in the country's northern, western and eastern regions.

In 2017, Iraq declared victory over Daesh by reclaiming all territories the terrorist group controlled since the summer of 2014, estimated to be about one-third of the country's territory. But the PKK terror group remains active in the region.

Eight years on since the Daesh terror group's massacres of Yazidis, more than 200,000 survivors are still displaced from their homes in Iraq, the United Nations said Thursday.

The needs of displaced persons living in and outside camps, and returnees remain high said the U.N. International Organization for Migration (IOM).

After seizing swathes of Iraq in 2014, Daesh carried out horrific massacres, including in the northern region of Sinjar where the Kurdish-speaking Yazidi minority has long been rooted.

A lack of adequate shelter and basic services such as running water, electricity, health care and education is making durable solutions difficult for Yazidis returning home or seeking to do so.

"Families are forced to focus on meeting their most basic needs rather than on meaningfully rebuilding their lives," the IOM said.

Daesh destroyed around 80% of public infrastructure and 70% of civilian homes in Sinjar city and its surrounding areas, the Geneva-based agency said.

Some are known to be held by Daesh, which persecuted Yazidis for their non-Muslim faith, but the whereabouts of others are uncertain.

Survivors among the non-Arab, Kurdish-speaking minority are unable to mourn lost loved ones, many of whom lie in unmarked and mass graves still awaiting exhumation, said the IOM.

"The scale of the atrocities committed against the Yazidi community is such that it will have an impact on generations to come," said Sandra Orlovic, IOM Iraq's reparations officer.

"The government of Iraq and the international community need to create conditions that will assure Yazidis that such atrocities will not happen again and support them in healing and rebuilding their lives."

The Norwegian Refugee Council said in May that violence and sluggish reconstruction had prevented Sinjar city's Yazidi, Muslim Kurdish and Arab residents from returning home, as had a surge in violence earlier in the month.

"A staggering 99 percent of those who applied for government compensation had not received any funding for damaged property," the aid group added.

In early May, fighting broke out between Iraqi troops and some Yazidi fighters affiliated with the PKK terror group.

More than 10,000 people fled the fighting, adding to the displaced population.