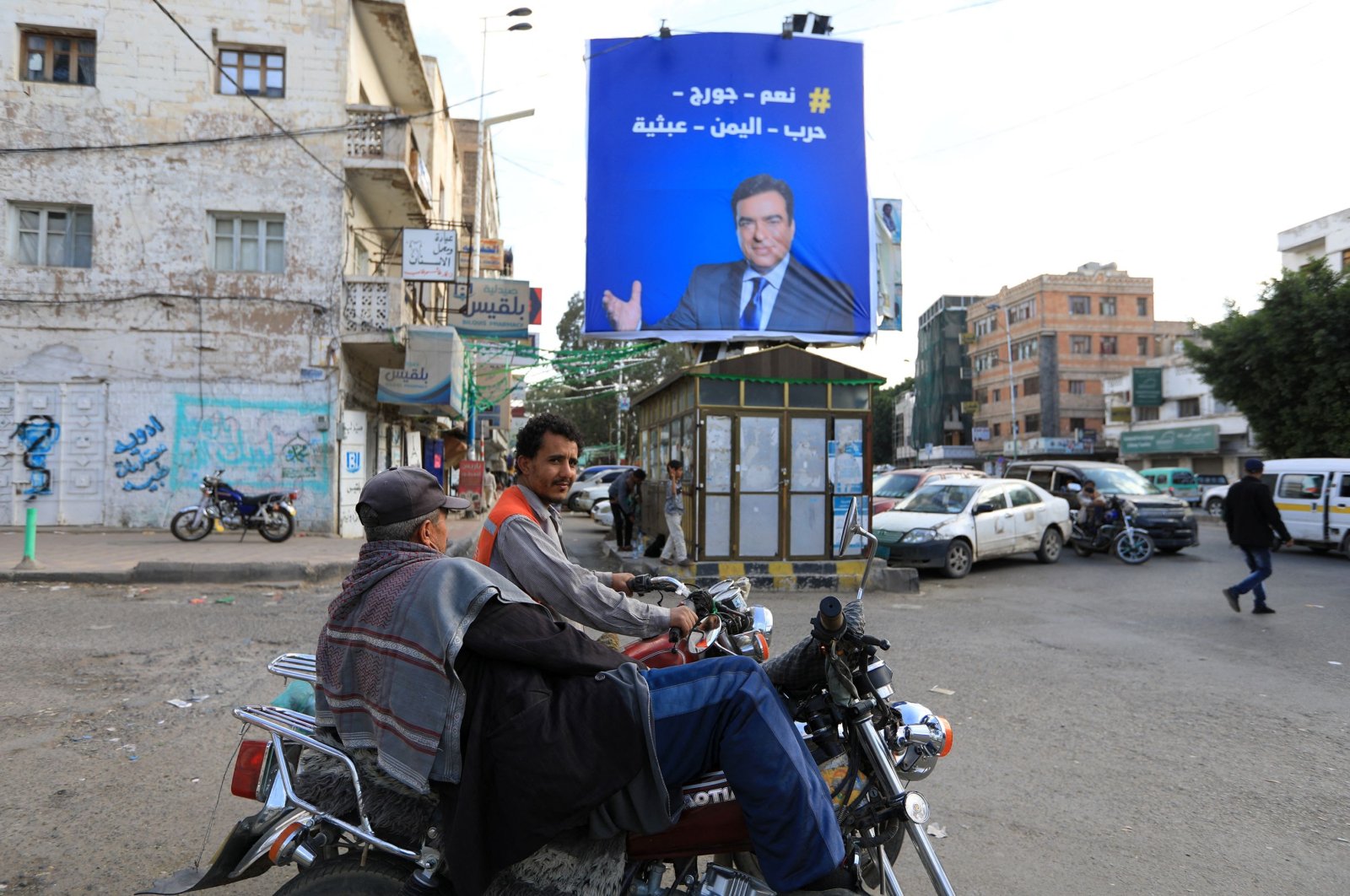 A portrait of Lebanese Information Minister George Kordahi is displayed on a billboard in Sanaa, Yemen, Oct. 31, 2021. (AFP Photo)
by Agencies Nov 03, 2021 8:50 am
RECOMMENDED

The Yemeni Foreign Ministry said it had summoned its ambassador, Abdullah al-Deais, for consultation because of the comments made by Kordahi on the conflict in Yemen, according to a statement cited by the Yemeni official news agency, SABA. The statement noted that al-Deais had delivered a letter from his government to the Lebanese Foreign Ministry on Wednesday about Kordahi's comments about the situation in the desert country.

"The government and people of Yemen will continue to confront the Iranian project and its militias, and will be the safety valve for the Arab peninsula and the region in general," the statement added, according to Anadolu Agency (AA).

Prior to the Yemeni move, Saudi Arabia, Kuwait, United Arab Emirates (UAE) and Bahrain recalled their ambassadors in protest of Kordahi's comments about the Saudi-led military campaign in Yemen in a televised interview said to be recorded before he took his post in the new Cabinet of Prime Minister Najib Mikati.

Asked if he "thinks that the Houthis, like Hezbollah, are defending their land as an armed organization," Kordahi responded: "Of course they are defending themselves... My personal opinion is that this war in Yemen needs to end. Houses, buildings, villages, and cities are being attacked by fighter jets."

Kordahi said last week that he has no intention to apologize for his comments or resign but confirmed he is committed to the Lebanese government program and policies.

On Monday, Mikati said that his country was facing a "downhill slope" in its growing diplomatic row with Gulf Cooperation Council (GCC) countries. The GCC is a six-member regional body comprised of Saudi Arabia, Kuwait, Bahrain, the UAE, Oman and Qatar.

Mikati said, "We face a downhill slope and if we don't avoid it, we will end up where nobody wants us to," the pro-Iranian Beirut-based Al-Mayadeen TV channel reported him as saying. Mikati also urged Kordahi, who made the comments, to "put his patriotic sense above all else" to defuse the crisis with Saudi Arabia.

The diplomatic row between Lebanon and Saudi Arabia is aggravating divisions in Lebanon, already reeling from an economic meltdown and its own social tensions. Some are pushing for the resignation of the Cabinet minister whose comments sparked the crisis, in order to protect economic and political ties with the Gulf. Others are defending him, describing calls for his removal as extortion.

Yemen has been engulfed by violence and instability since 2014, when Iran-aligned Houthi rebels captured much of the country, including the capital, Sanaa. A Saudi-led coalition aimed at reinstating the Yemeni government has worsened the situation and caused one of the world’s worst man-made humanitarian crises.