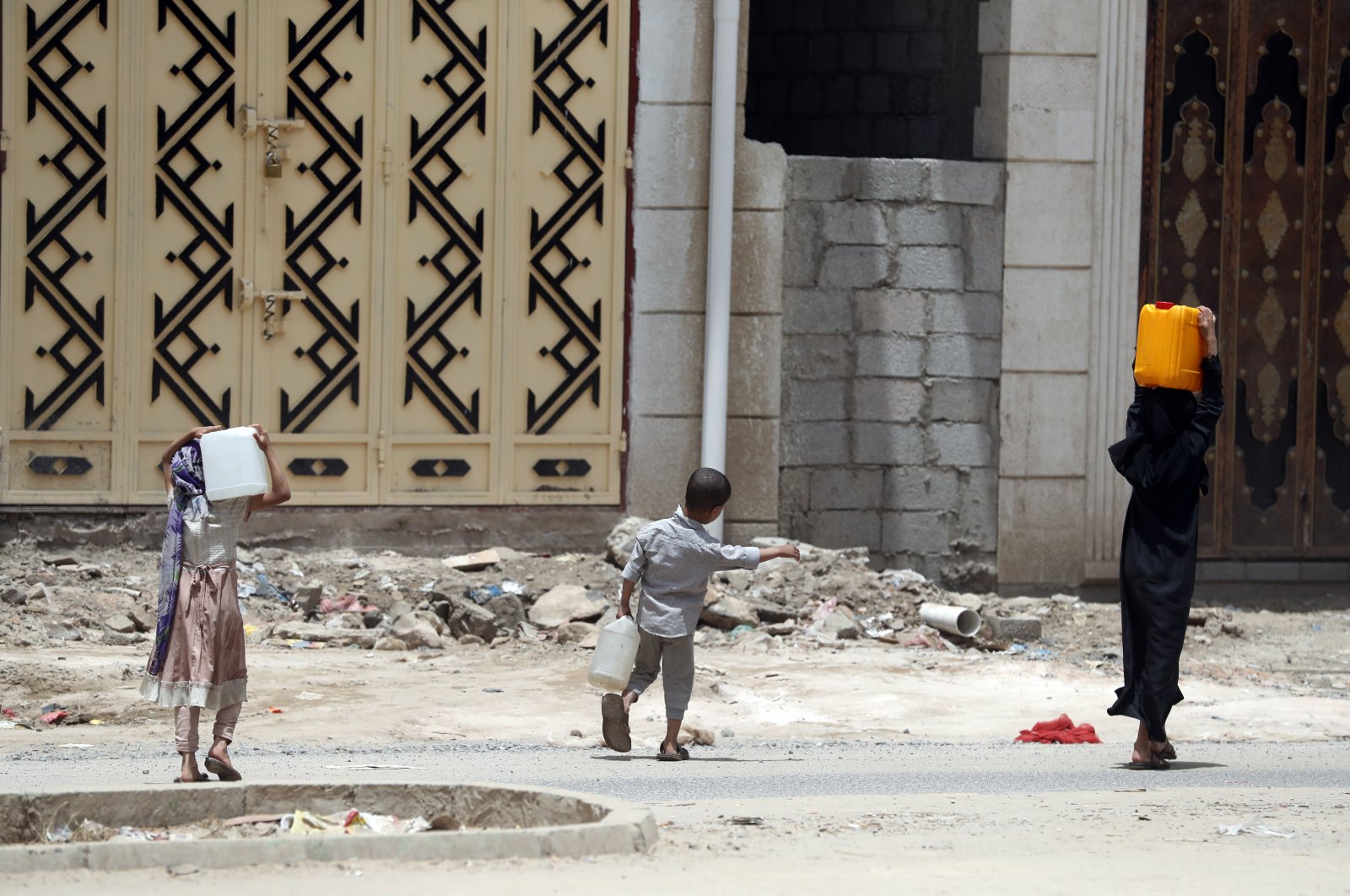 Yemeni children carry water-full bottles after filling them from a charity tap amid concerns over the spread of the coronavirus COVID-19, in Sanaa, Yemen, April 5, 2020. (EPA Photo)
by French Press Agency - AFP Apr 16, 2020 1:05 pm
RECOMMENDED

Yemen's war shows no signs of abating, one week after the Saudi-led military coalition declared a unilateral truce due to the coronavirus threat looming over the impoverished nation.

Yemen announced its first case of the COVID-19 respiratory disease on April 10, as aid organizations warn the country's health system, which has all but collapsed since the conflict broke out in 2014, is ill equipped to handle the crisis.

The coalition supporting the government against the Iran-backed Houthi rebels said the fortnight-long cease-fire was designed to head off the pandemic, in a move welcomed by the United Nations but dismissed by the insurgents as political manoeuvering.

Has a cease-fire been agreed?

Despite Saudi Arabia's announcement of a halt in military activities from April 9, fighting on the ground and coalition airstrikes continue.

"We don't have a cease-fire agreement that all of the major players have signed up to yet," Peter Salisbury, an analyst at the International Crisis Group, told Agence France-Presse (AFP).

U.N. Special Envoy for Yemen Martin Griffiths said April 10 he had sent revised proposals to both sides to secure a nationwide cease-fire and the "urgent resumption" of political dialogue.

The confirmation of Yemen's first coronavirus case "makes it even more imperative to stop the fighting immediately," he said.

What do the Houthis want?

The rebels are negotiating from a strong position after recent military gains, as they advance toward the government's last northern stronghold of Marib, an oil-rich region which would be a major strategic prize.

Hours before the Saudi-led coalition's truce announcement, the Houthis released a document with a long list of demands including the withdrawal of foreign troops and the end of the coalition's blockade on Yemen's land, sea and air ports of entry.

"The Houthis see a cease-fire as more than just a halt to military activities," Salisbury said.

The rebels also demanded that the coalition pay government salaries for the next decade and hand over compensation for rebuilding, including homes destroyed in airstrikes.

"Saudi Arabia may want out of the Yemen war and is certainly prepared to pay for a lot of reconstruction, but they are not likely to sign an agreement that calls for their total capitulation," said Elana DeLozier, a fellow at the Washington Institute for Near East Policy.

Why is Saudi offering an olive branch?

The cease-fire announcement comes at a sensitive time for Saudi Arabia, which is reeling from plunging oil prices and grappling with a serious coronavirus outbreak of its own.

It has for some months indicated it is seeking to extricate itself from the costly conflict that has killed tens of thousands of Yemeni people and triggered what the U.N. calls the world's worst humanitarian crisis.

Experts say that pressure on the Saudis to reduce civilian casualties in airstrikes, a drawdown by their coalition partner the United Arab Emirates' in mid-2019, together with rifts within the government camp, have weakened the coalition and strengthened the rebels' resolve.

"The coronavirus threat provided a face-saving way to announce a cease-fire without seeming to give in to the Houthis," DeLozier said.

What does this mean for Yemenis? "We in Yemen don't want an announcement of a cease-fire, we want an actual cease-fire on the ground," Abdulhaq al-Amiri, 35-year-old resident of Sanaa, told AFP.

An estimated 24 million Yemenis – more than 80 percent of the population – depend on some form of humanitarian or protection assistance for survival, according to the U.N.

More than three million are displaced, many in camps that are especially vulnerable to disease.

Bashir al-Fadli, a 28-year-old from Sanaa, said that neither the coalition nor the rebels have the Yemeni people's interest at heart.

"We are sick and tired of war... and the only loser is the Yemeni citizen, with no salary, no water, no electricity, no education – yet both sides don't care," he said.

For Amjad Ali, 28, the novel coronavirus is just another issue the Yemenis will have to deal with.

"The whole world is scared of the coronavirus, except for Yemen. We here have become accustomed to death."