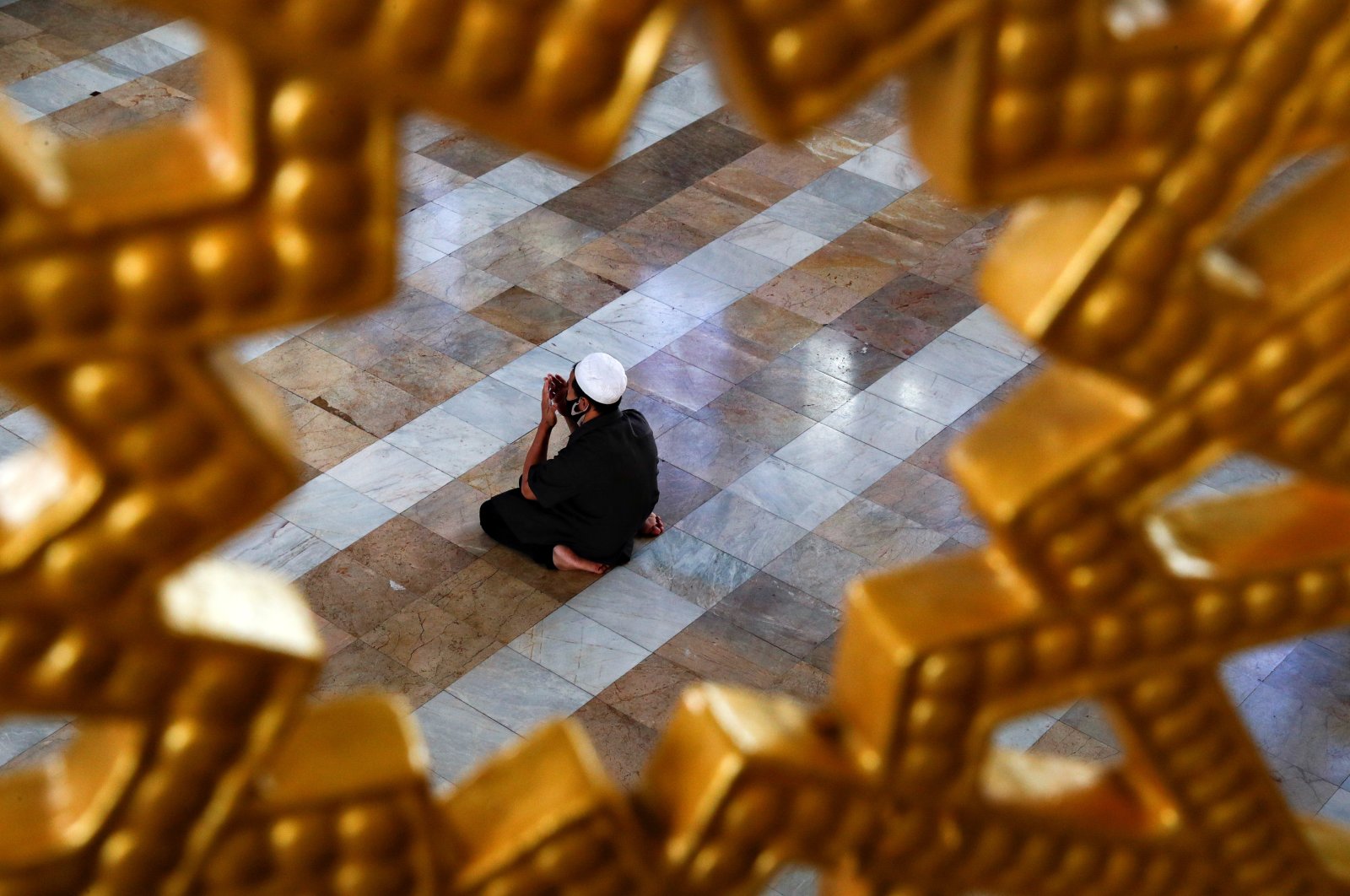 A Muslim man wearing a protective face mask prays at a mosque on the first day of the holy fasting month of Ramadan, amid the coronavirus outbreak, in Bangkok, Thailand, April 24, 2020. (Reuters Photo)
by Daily Sabah with AFP
Apr 24, 2020 9:51 am

Muslims around the world began marking Ramadan under coronavirus lockdowns on Friday with unprecedented bans on family gatherings and mass prayers, while a pushback in some countries has sparked fears of a surge in infections.

The virus has upended life around the planet as nations try to stop the spread of the disease that has so far claimed nearly 190,000 lives, infected close to 2.7 million people and hammered the global economy.

During Ramadan, Muslims have to abstain from eating, drinking and smoking from dawn to sunset. Devout Muslims also mark the month by performing special evening prayers, known as the taraweeh, however these will not be able to take place in mosques in most places due to the pandemic.

Most Muslim-majority countries announced that the holy month started as of Thursday night, including Turkey, Kuwait, Qatar, Tunisia, Lebanon, Egypt, Saudi Arabia, the United Arab Emirates and Iraq's Sunni Muslim minority. The beginning and end of Islamic months are determined by the sighting of the new moon.

The Gulf sultanate of Oman announced the crescent was not spotted, thus Ramadan will begin on Friday night, along with Iran.

This year, the holy daytime fasting month will be a somber affair for many across Asia, the Middle East and North Africa.

"It pains me that we are starting this month under circumstances that prevent us from praying together in the mosques," Saudi Arabia's King Salman said in a statement published by the state news agency SPA. Salman also praised health workers, security personnel, soldiers at the borders and all those working amid the pandemic and thanked them for their "great work."

The kingdom is home to Mecca and Medina, the two holiest sites of Islam.

In most Middle Eastern countries, there are strict nighttime curfews in line with social distancing requirements, which were initially extended into Ramadan, such as in Egypt, the UAE, Tunisia and Morocco. Widespread rules have been imposed banning praying in mosques or meeting relatives and friends for large "iftar" meals at dusk – a centerpiece of the monthlong fast.

In Turkey, Ramadan began as a four-day curfew to curb the spread of the coronavirus was in effect in 31 provinces since Wednesday midnight. It will the third consecutive weekend the country imposes a curfew in its most populated cities, where coronavirus infections are much more common, and this week the lockdown was extended to four days to also cover the April 23 National Sovereignty and Children’s Day.

The restrictions have put a damper on spirits in Indonesia, the world's biggest Muslim majority nation, where national religious organizations have called on the faithful to stay at home.

"I'm disappointed that I can't go to the mosque, but what can we do? The world is different now," she said.

However, some religious leaders in Asia – home to nearly a billion of the world's Muslims – have waved off fears about the spread of COVID-19.

Several thousand worshipers attended evening prayers Thursday at the biggest mosque in the region's capital Banda Aceh, though crowds were smaller than usual.

"I'm not worried because I'm wearing a face mask and keeping my distance," said Cut Fitrah Riskiah, one of those taking part.

The threat of large religious gatherings has been highlighted in recent weeks by waves of infections in Asia, linked to separate, massive Islamic congregations in Malaysia, Pakistan and India.

The World Health Organization (WHO) has called for a stop to some Ramadan activities to limit exposure. But in Bangladesh, clerics have pushed back at attempts to shrink the number of people going to mosques. Pakistan has seen its mosques crammed in the lead up to Ramadan with the faithful sitting shoulder-to-shoulder and paying little heed to social distancing.

Mohamad Shukri Mohamad, the top Islamic cleric in the conservative Malaysian state of Kelantan, planned to skip public prayers and family meals, even if it meant not seeing his six children and 18 grandchildren.

"This is the first time in my life that I've been unable to go the mosque," he told Agence France-Presse (AFP).

"But we must accept it and obey the rules of social distancing to protect our lives," he said.

Muslim-majority Malaysia has extended a strict lockdown until mid-May with mosques, schools and most businesses closed, and police checkpoints set up to catch rule-breakers.

Even popular Ramadan bazaars, where Muslims buy local delicacies before breaking their fast, have been banned.

Instead, Malaysians can only order from so-called "e-bazaars," where people order goods online and have them delivered to their homes.

In neighboring Indonesia, fears of a spike in coronavirus cases when millions travel to hometowns and ancestral villages at the end of Ramadan has forced the country of some 260 million to issue a ban on the annual exodus.

The government has also announced a clampdown on all air and sea travel across the 17,000-island archipelago.

Jakarta resident Erik Febrian said he was relying on a computer to allow him to keep in touch with his out-of-town parents until he can see them in person at the end of Ramadan.

"Thanks to technology I can video-call my parents every day during Ramadan, and keep an eye on their health," he said.

Salah Jibril, an unemployed Palestinian man who lives with his wife and six children in a cramped two-bedroom apartment in the Gaza Strip, said he was not sure how his family would cope without Ramadan donations.

"The markets and mosques are closed. The good people who give us money or aid each Ramadan are facing a tough situation," he said.

"This is the hardest Ramadan we have faced. We don't know how we will cope."