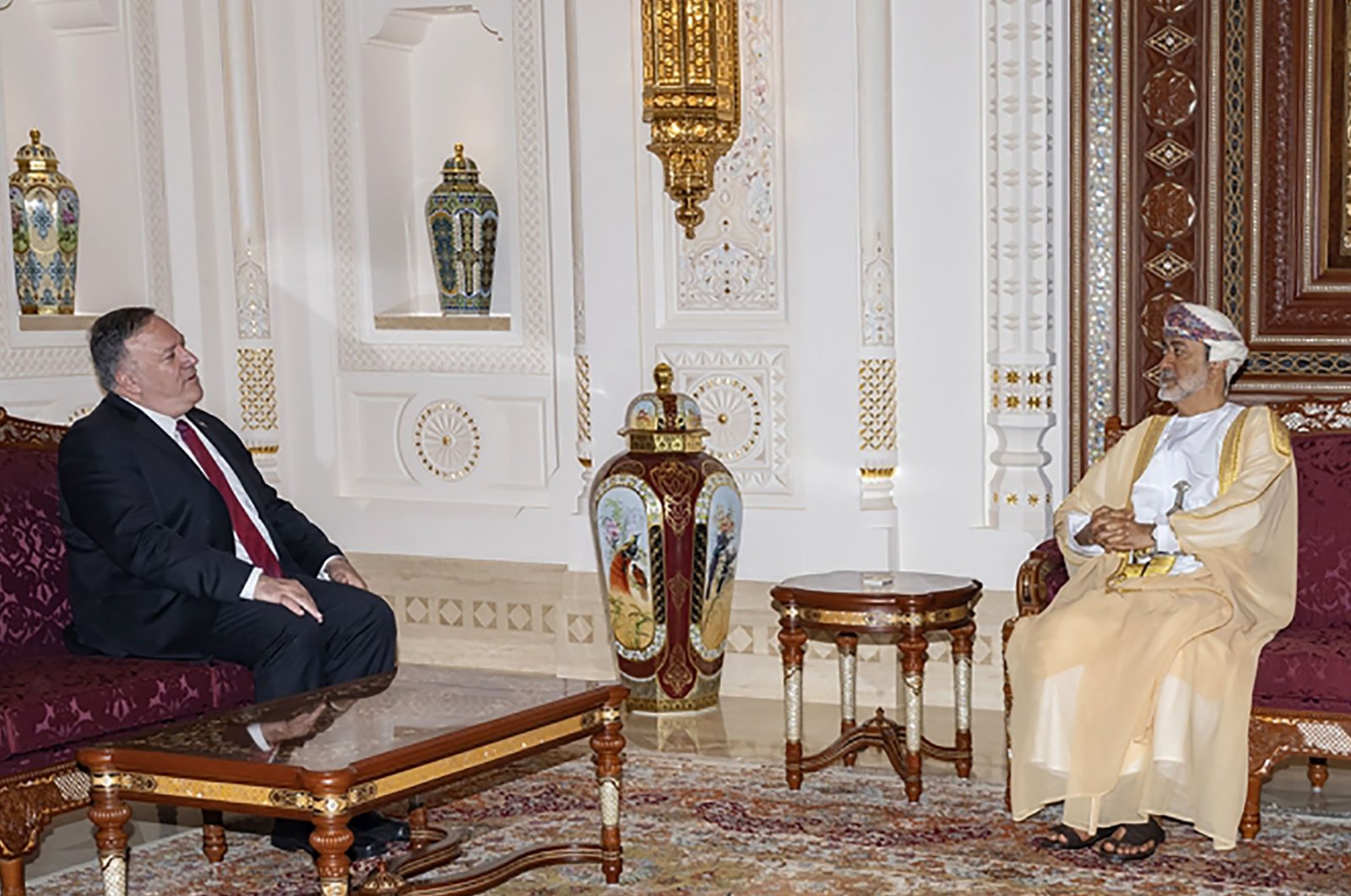 U.S. Secretary of State Mike Pompeo met the Sultan of Oman Thursday on the final leg of his Middle Eastern tour following a U.S.-brokered deal on normalizing ties between Israel and the United Arab Emirates (UAE).

In a meeting with Sultan Haitham bin Tariq al-Said, Pompeo said on Twitter the pair discussed "the importance of building regional peace, stability, and prosperity through a united Gulf Cooperation Council."

Haitham took power in January after Sultan Qaboos bin Said died after a half-century at the helm of the Gulf country.

In the turbulent region, Oman has worked to maintain its neutrality and has kept friendly relations with a range of actors in the area, including arch-foes like the United States and Iran – for whom Oman has acted as a go-between.

Last week, Oman's international relations portfolio was given to Badr al-Busaidi. Previously, the title Foreign Minister was held by the Sultan, while Yousuf bin Alawi was the longstanding person responsible for foreign affairs.

Tel Aviv's intelligence minister said a few days after the UAE-Israel accord was announced on Aug. 13 that Bahrain and Oman could be the next Arab nations to formalize ties with the country.

Oman praised the U.S.-sponsored accord between the UAE and Israel but has not commented on its own prospects for normalized relations.

"Aspects of the existing bilateral cooperation between the Sultanate and the United States were reviewed within the framework of the strong relations binding them and matters of mutual interest," the state-run Oman News Agency said in a report of the sultan's meeting with Pompeo.

Before arriving in the capital Muscat, Pompeo traveled to Jerusalem, Sudan, Bahrain and the UAE on his trip through the Middle East, one that included him offering a recorded message in Jerusalem supporting President Donald Trump's reelection campaign for the Republican National Convention. That speech cast aside his own advice to American diplomats to be apolitical and bulldozed a long tradition of nonpartisanship by previous secretaries of state.

On Wednesday Pompeo held closed-door meetings with Bahrain's royal family and top officials of the UAE amid Trump's push for Arab nations to recognize Israel.

In a statement after the meeting, Pompeo said they had discussed the "importance of building regional peace and stability, including the importance of Gulf unity and countering Iran’s malign influence in the region" while the state-run Bahrain News Agency reported that King Hamad bin Isa bin Salman al-Khalifa “stressed the importance of intensifying efforts to end the Palestinian-Israeli conflict.”

According to the agency, the king said that it included a two-state solution for an independent Palestinian state with east Jerusalem as its capital – a longtime Arab stance.

During his visit to Khartoum, Pompeo aimed to create a platform for “deepening the Sudan-Israel relationship” while Prime Minister Abdalla Hamdok sought to reach an agreement for removing Sudan from the U.S. terror list.

The prime minister, however, urged the Trump administration not to link the removal of Sudan’s name from its list of state sponsors of terrorism to the normalization of ties with Israel, said Information Minister Faisal Saleh.

"The transitional government does not have the mandate ... to decide on normalization with Israel. This matter will be decided after the completion of the transitional authority,” said Saleh, referring to the legislative body that has yet to be formed.

The U.S.' chief diplomat was hopeful other nations would follow the UAE, which became only the third Arab country to establish relations with the Jewish state, after Egypt and Jordan. It seems as though Pompeo left empty-handed, however, after none of the conservative Arab nations he visited, for now, are willing to follow Abu Dhabi and normalize ties with Tel Aviv.