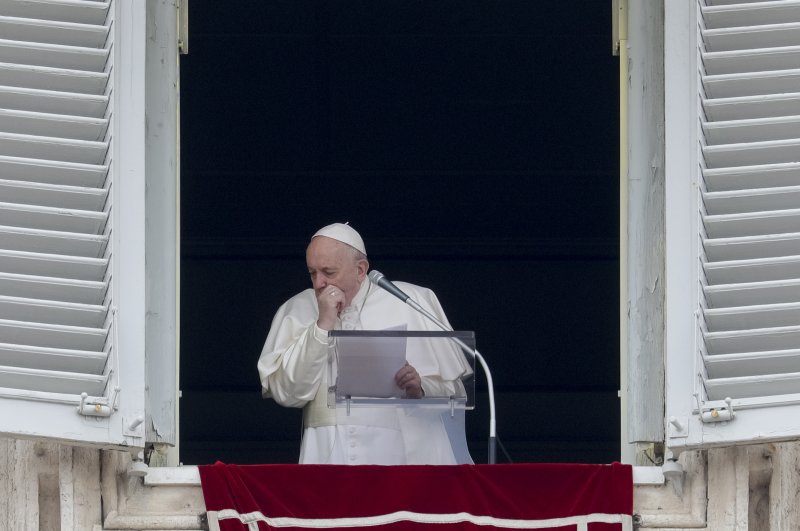 Pope Francis coughs during the Angelus noon prayer from the window of his studio overlooking St. Peter's Square, at the Vatican, March 1, 2020. (AP Photo)
by Associated Press
Mar 01, 2020 3:31 pm

A coughing Pope Francis told pilgrims gathered for the traditional Sunday blessing that he is canceling his participation at a week-long spiritual retreat in the Roman countryside because of a cold.

It is the first time in his seven-year papacy that he has missed the spiritual exercises that he initiated early in his pontificate to mark the start of each Lenten season. Such retreats are typical Jesuits, an order to which he belongs.

The 83-year-old pontiff, who lost part of a lung to a respiratory illness as a young man, has canceled several official engagements this week as he battled an apparent cold.

His weekly appearance Sunday to pilgrims from a window high above St. Peter’s Square was the first time he has been seen publicly since Ash Wednesday when he was seen coughing and blowing his nose during Mass.

Francis paused twice to cough Sunday while addressing the faithful. At the end of his address, he asked for prayers for the spiritual retreat, adding that, "unfortunately a cold prevents me from participating this year. I will be following the meditation from here.”

Earlier this week, the pope canceled two planned official audiences – formal affairs in the Apostolic Palace where Francis would have delivered a speech and greeted a great number of people at the end. Those were to include an audience with an international bioethics organization and with members of the scandal-marred Legion of Christ religious order.

Francis has never previously canceled so many official audiences or events in his papacy. He was, however, continuing to work from his residence at the Vatican's Santa Marta hotel and was receiving people in private, the Vatican press office said. On Saturday, those private meetings were with the head of the Vatican's bishops' office, Francis' ambassadors to Lebanon and France and a Ukrainian archbishop.

He was to have left Sunday for the retreat outside of Rome.

The Vatican has described Francis's condition as "a slight illness," without giving other details. Francis' illness, though, has come amid general alarm in Italy over the coronavirus outbreak, which has infected more than 1,100 people, mostly in northern Italy.

There have been just six cases reported in Lazio, where Rome is located, to date.