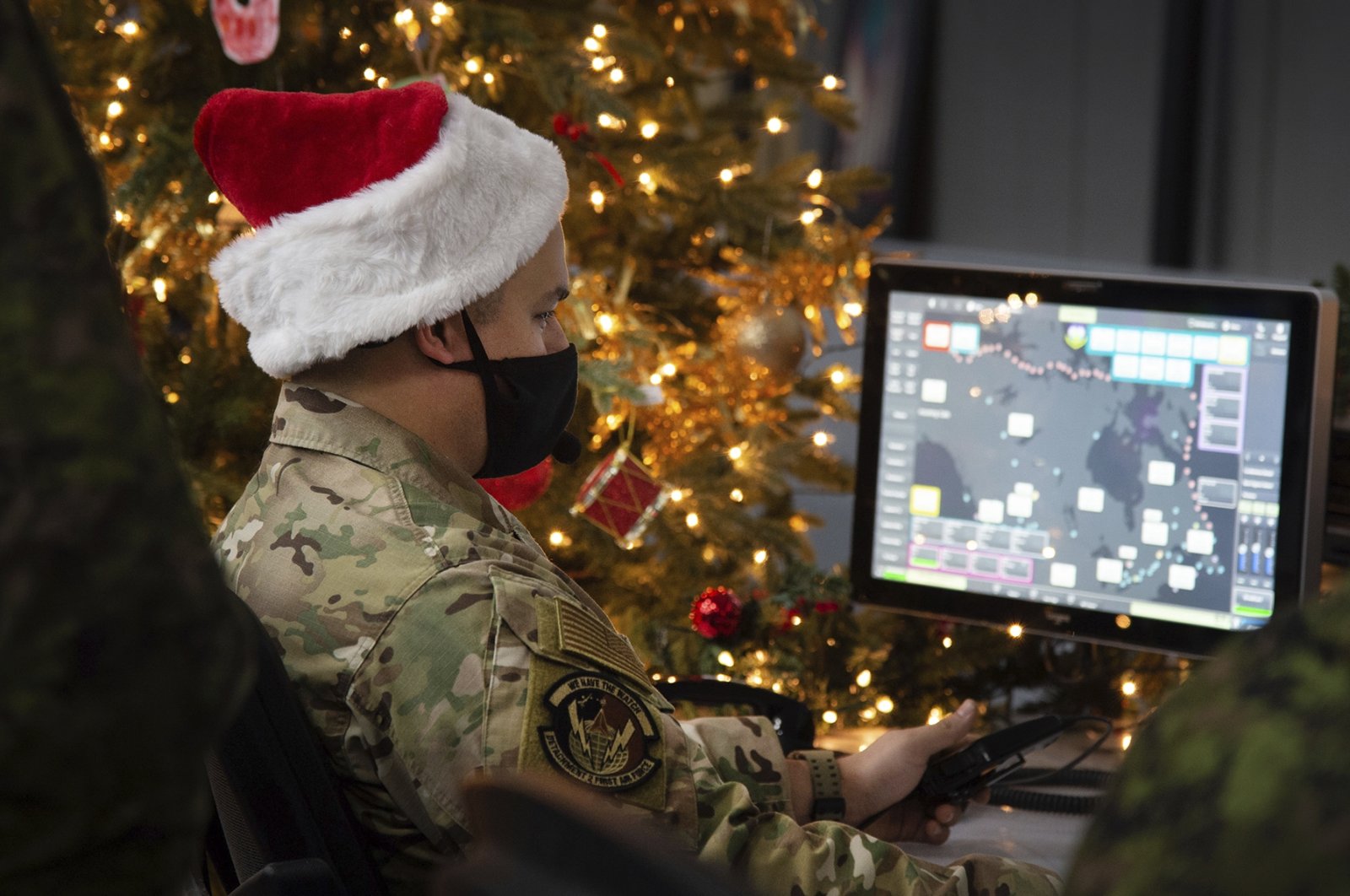 In this photo provided by the North American Aerospace Defense Command, a 22 Wing member is seen showing how they track Santa on his sleigh on Christmas Eve during a media preview at the Canadian Forces Base in North Bay, Canada, Dec. 9, 2021. (NORAD via AP)
by ASSOCIATED PRESS Dec 24, 2021 5:59 pm
RECOMMENDED

He's making a list, checking it twice, going make sure he's masked up all tight, Santa Claus is coming to town.

Rest assured, kids of all ages: Santa’s coming this Christmas Eve, and a second holiday with COVID-19 won’t stop him.

That’s the word from the joint U.S.-Canadian military operation that for 66 years has been tracking Jolly Old St. Nicholas on his global mission and has assured us all – first by land line and more recently by iPhone, Android, OnStar, Facebook, YouTube and more – that he’s on his way with a sleigh stuffed with toys and a welcome dose of joy.

From deep inside NORAD headquarters, dozens of volunteers field an unrelenting wave of phone calls to 1-877-HI-NORAD (1-877-446-6723). They and other volunteers working off-site because of coronavirus distancing protocols will answer such questions as “When will he come to my house? What kind of cookies does he like?” said program manager and NORAD spokesperson Preston Schlachter.

Want to watch? Visit https://www.noradsanta.org, check out #NORADTracksSanta and @NoradSanta on Twitter, or use the associated apps. You can also email noradtrackssanta@outlook.com for the latest updates.

Even before Friday’s takeoff, the NORAD webpage had been visited more than 3 million times, Schlachter said.

“Every household, every country is having to deal with the impact of this pandemic. Santa Claus is an icon, and he is a source of joy for a lot of people,” Schlachter said.

For those worried about Santa’s safety – or their own – the bearded man likely will be wearing a mask at each stop, and of course, he’s wearing gloves, Schlachter noted. For the technically inclined, NORAD’s website offers more data on the voyage (Weight of gifts at takeoff: 60,000 tons, or 54,600 metric tons; sleigh propulsion: nine RP, or reindeer power).

Like any good Christmas tale, the program’s origin has been told for generations.

In 1955, Air Force Col. Harry Shoup – the on-duty commander one night at NORAD’s predecessor, the Continental Air Defense Command – answered a call from a child who dialed a number that was misprinted in an ad in a newspaper, thinking she was calling Santa.

Shoup “answered the call, thought it was a prank at first, but then realized what had happened and assured the child that he was Santa, and thus started the tradition that we are celebrating now 66 years later,” Schlachter said.

NORAD’s mission is to watch the skies above North America for any potential threats. Come early Christmas Eve, the Santa operation begins when a cluster of radar stations in northern Canada and Alaska pick up an infrared signature emanating from Rudolph’s nose. NORAD’s array of geostationary satellites above the Earth monitors the journey.

“We Have the Watch,” is NORAD’s military-mission motto.

And when it comes to Santa, NORAD adds:

“Santa calls the shots. We just track him.”