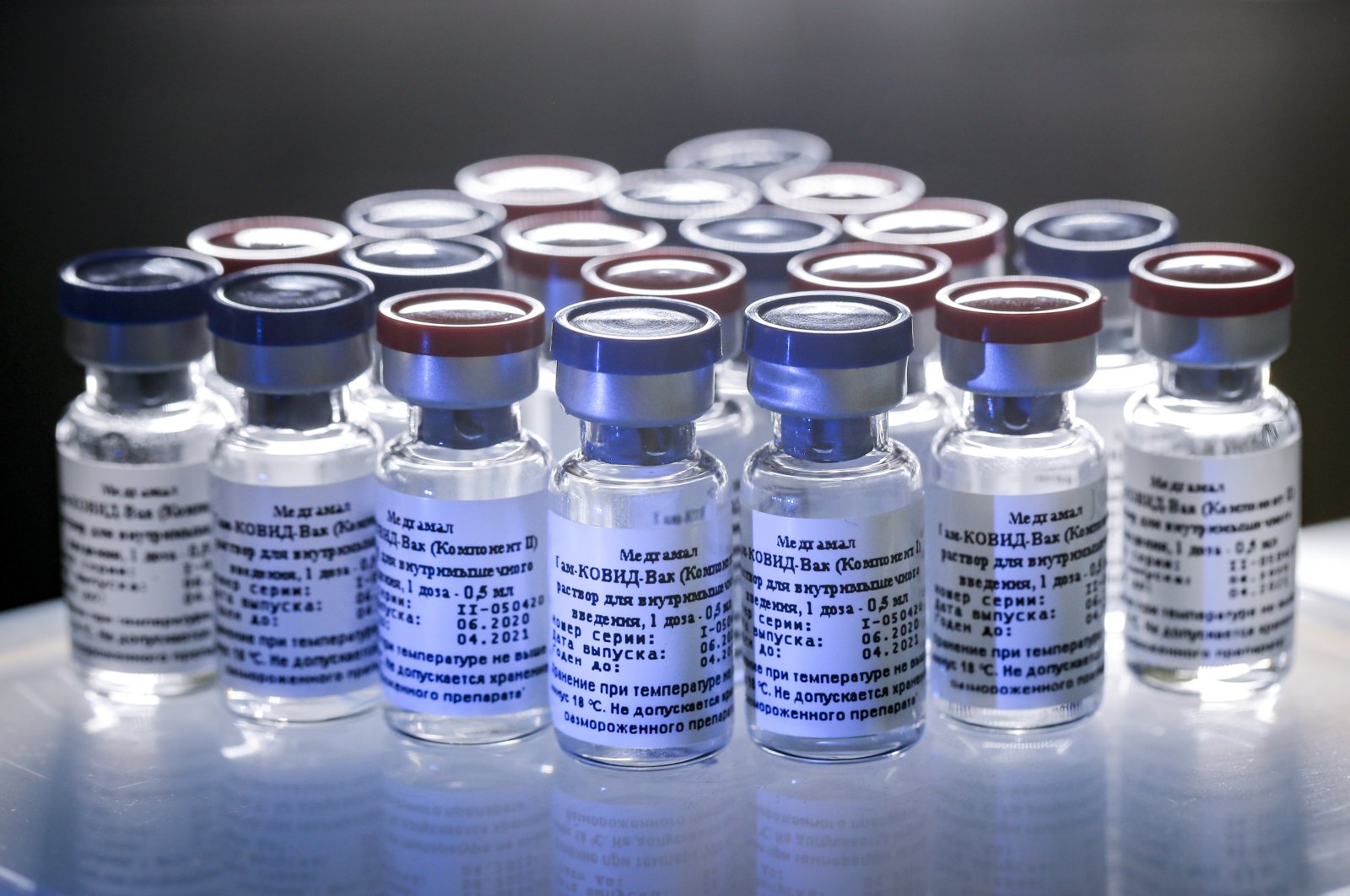 In this handout photo taken on Thursday, Aug. 6, 2020, and provided by Russian Direct Investment Fund, a new vaccine is on display at the Nikolai Gamaleya National Center of Epidemiology and Microbiology in Moscow, Russia. (AP Photo)
by Agencies Aug 12, 2020 12:55 pm
RECOMMENDED

Russia said on Wednesday the first batch of its COVID-19 vaccine would be ready for some medics within two weeks and rejected as "groundless" safety concerns aired by some experts over Moscow's rapid approval of the drug.

President Vladimir Putin said Tuesday that Russia had become the first country to grant regulatory approval to a COVID-19 vaccine, after less than two months of human testing.

The vaccine has not yet completed its final trials. Only about 10% of clinical trials are successful and some scientists fear Moscow may be putting national prestige before safety.

"It seems our foreign colleagues are sensing the specific competitive advantages of the Russian drug and are trying to express opinions that in our opinion are completely groundless," Health Minister Mikhail Murashko said Wednesday.

He said the vaccine developed by Moscow's Gamaleya Institute would be administered to people, including doctors, on a voluntary basis, and would be ready soon.

"The first packages of the medical vaccine against the coronavirus infection will be received within the next two weeks, primarily for doctors," he said.

Alexander Gintsburg, director of the Gamaleya Institute, said clinical trials would be published once they have been assessed by Russia's own experts.

He said Russia plans to be able to produce 5 million doses a month by December-January.

Kazakhstan plans to send government officials to Moscow later this month to discuss possible deliveries of the vaccine, its presidential office said.

Israel's health minister said it would examine Russia's COVID-19 vaccine and enter negotiations to buy it if it is found to be a "serious product."

"We are following vigilantly every report, no matter what country," Israeli Health Minister Yuli Edelstein told reporters. "We have already discussed the reports from the research center in Russia about vaccine development.

"If we are convinced it is a serious product, we will also try to enter negotiations. But I don't want to delude anyone. The ministry's professional staff is working on this all the time. The vaccine will not come tomorrow," he said. Israel is developing its own vaccine candidate and intends to begin human trials as early as October. It has also signed with Moderna and Arcturus Therapeutics for the option to buy their potential vaccines.

Philippine scientists were set on Wednesday to meet representatives of the Russian state research facility that developed a coronavirus vaccine, to discuss participation in clinical trials and access to its research data.

Philippine President Rodrigo Duterte has lauded the Russian vaccine and offered to be "injected in public," to allay public fears about its safety.

Meanwhile, U.S. Health Secretary Alex Azar said the push to develop a COVID-19 vaccine is "not a race to be first."

Azar emphasized that the U.S. is combining the powers of its government, economy and biopharmaceutical industry to "deliver as quickly as we can for the benefit of the U.S. citizens, but also for the people of the world, safe and effective vaccines."

He said the U.S. has secured an advanced manufacturing contract for a vaccine, being developed by the company Moderna, and has supply agreements with five other firms who have vaccines in the works.

According to him four of the six companies under contract have reported testing results showing they produce more antibodies for the virus than people who have survived COVID-19, without severe side effects.

Azar said two companies' vaccine candidates have entered the third phase of trials while the Russian vaccine is just now embarking on that stage with no information having been disclosed.

The U.S. process should allow the production of a "gold-standard, safe and effective vaccine" available in the tens of millions of doses by the end of the year, he added.